After my visit to the InterNations Manama Community, the capital of Qatar was but a half hour’s flight away. Mark, our long-term Doha Ambassador, was so kind as to pick me up at the airport.

Mark — who is half Scottish, half Egyptian — has lived in an impressive twelve countries so far, moving from Dubai to Doha six years ago, where he now works as an advisor to two government offices. He got actively involved in the local InterNations Community more or less immediately and soon took on the position of Doha Ambassador. 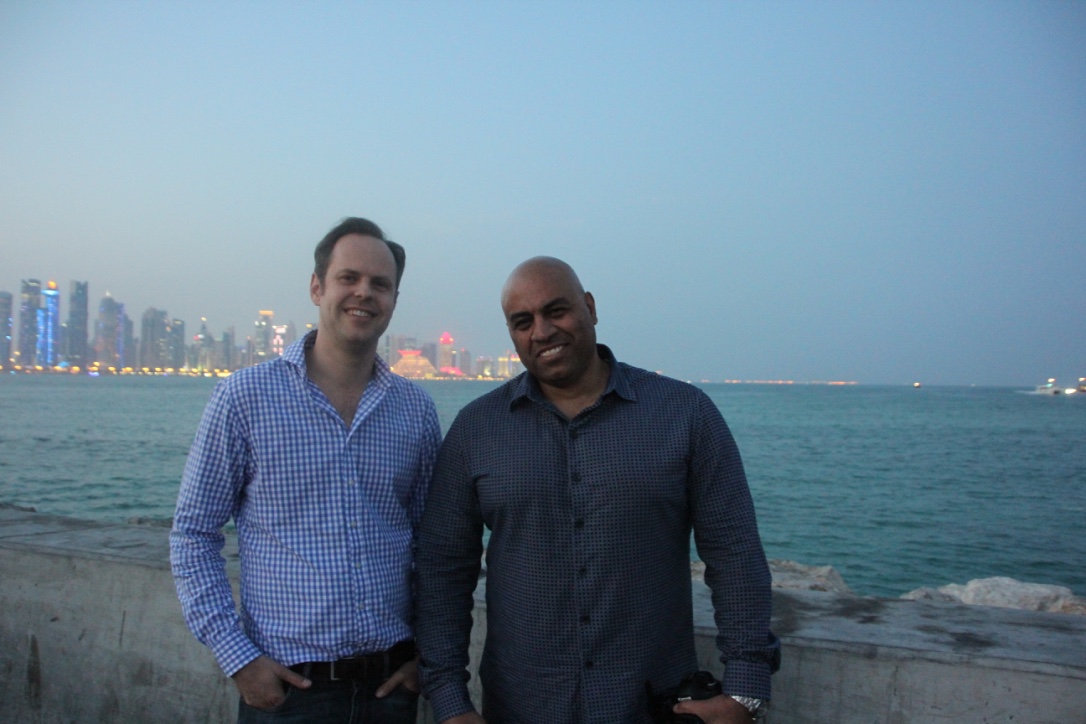 For half a dozen years, Mark has been investing a lot of time and energy into organizing local events for InterNations, connecting members in Qatar, answering their questions about life in Doha in general and our community in particular, and simply making life easier for expats in the Middle East.

Mark also acts as a Consul for several of the InterNations Groups in Doha, such as the Professional Networking Group and the InterNations Volunteer Program. For the former, he has organized a series of interesting events with guest speakers on various topics, like internet security or social media marketing. 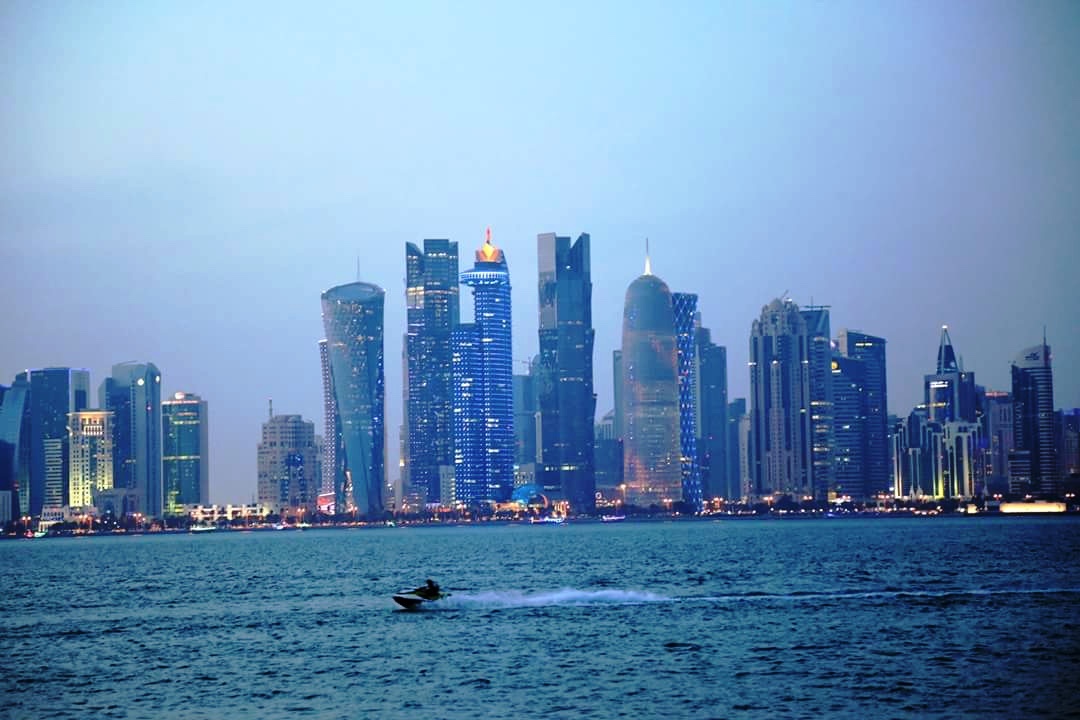 For the Volunteer Program, he motivated our volunteers in Doha to participate in one of the world’s largest “ice bucket challenges” to raise awareness — and funds — for the fight against ALS, a degenerative motor neuron disease, as well as the plight of children in Gaza. Moreover, the InterNations Doha Volunteer Group also supports a local migrant labor camp, for example, by organizing two donation drives with tons of food and essential household items, like fridges.

A Souq from the Arabian Nights

In Mark’s spacious white Hummer — one car in Doha’s airport parking lot really seemed to be bigger than the next — he took me to the Hilton Hotel on the waterfront, the venue for the upcoming InterNations Official Event. With a splendid view of Doha’s skyline as a backdrop, we discussed the growth of InterNations as a global network and especially of the Doha Community. Mark also showed me the videos he has produced himself of various local events, and soon we were talking strategic development of InterNations in Qatar. 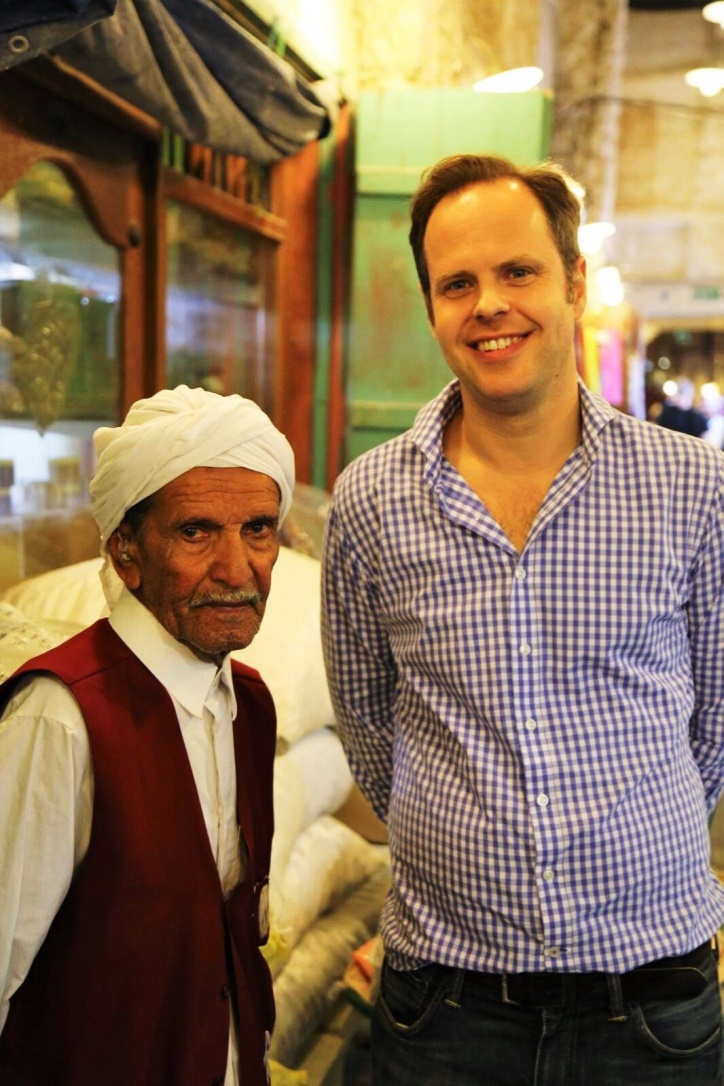 The next stop of our mini-tour of the Qatari capital was the port of Doha, which doesn’t only offer a lovely panorama of the skyline, but also houses the highly recommended Museum of Islamic Art. A little further inland, we took a stroll through the local Souq Waqif, which was rebuilt, after a devastating fire in 2003, in a deliberately old-fashioned style to attract more visitors and to appeal to tourists’ fantasies of the Arabian Nights.

Nevertheless, the souq is more than just a retro-style tourist trap: it’s very lively and its many market stalls, cafés, and restaurants are clearly popular among locals, particularly among families with kids. Mark was even to produce a short video of our sightseeing trip through Doha, which he’d show to me on the following day. He’s definitely a multimedia kind of guy!

The Perfect Venue for a Mellow Evening in Spring

After exploring some of Doha’s famous sights, it was already time for me to head back to the Hilton Hotel, where I had just enough time to squeeze in a shower and a change of clothes before the event started at 20:00. The InterNations Doha Community has as many as 20,000 members, and 180 of them had signed up for the get-together in the highly popular Society Lounge. 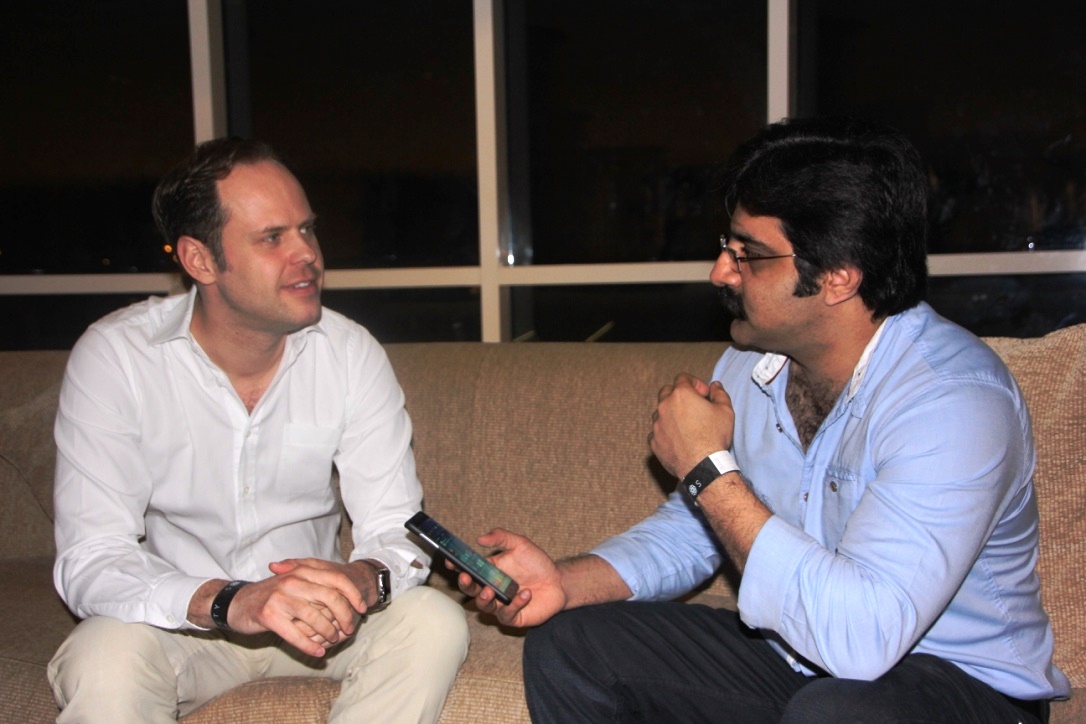 The venue was simply amazing — a huge open-air lounge with a great vista of Doha’s cityscape and the ocean, a mild breeze from the sea providing the perfect temperatures for an outdoor event. InterNations had booked a large part of the venue exclusively, but the queue at the entrance — where the guests needed to register with an official ID, as is the legal requirement in Doha — was fairly long nonetheless.

While the attendees were still gathering, I used the “warm-up period” of the event for a meet-up with the local media, which Mark had also organized for me. So I gave an interview to SNAP TV, an online TV station, as well as another one to Gulf News, one of the major English-language newspapers in the Persian Gulf region.

Of course, I also got to meet plenty of members — from Egypt, Jordan, Spain, Sweden, Ukraine, the UK, and many other countries — and several InterNations Group Consuls later that night. 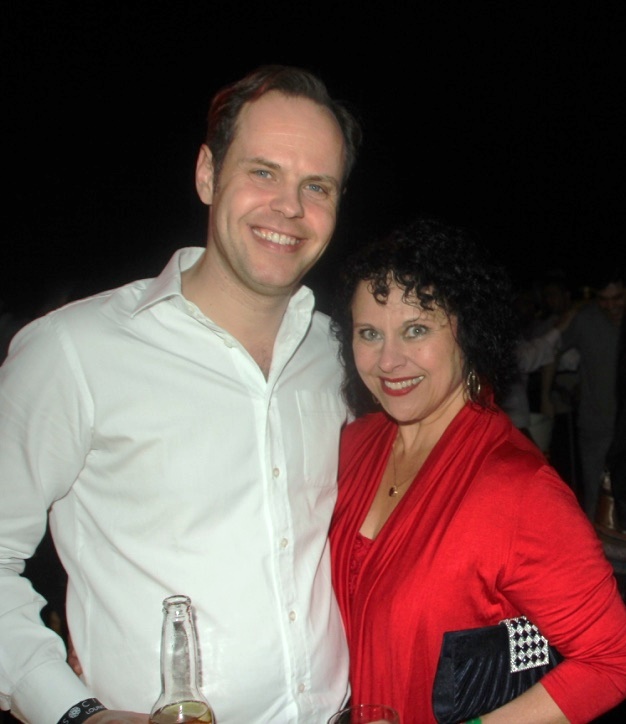 There’s Rafif, our Newcomers’ Ambassador from Montréal, who provides newly arrived expats and new members of the InterNations Doha Community, with a warm welcome; Rebecca, a US American expat and one of the Consuls running our Volunteer Group, who is keenly interested in animal welfare and therefore supports a rescue shelter for stray dogs with regular activities, and Ekene from Nigeria, who keeps the InterNations members in Doha on their toes by organizing the Corniche Jogging Group.

That night, though, we had a DJ to keep us moving. Most of the guests eventually started dancing along, clearly happy to enjoy themselves outside on such a mellow night. Soon, the rising temperatures won’t allow that anymore, and everyone will take refuge in air-conditioned rooms over the summer.

A Day Full of Stark Contrasts

On the following morning, I met up with Rafif and her boyfriend — whom she actually met thanks to InterNations — for breakfast. Rafif, who has worked as a pediatric dentist in Qatar since 2012, told me that she’d made many good friends via InterNations and wanted to “give back” to the Doha Community, which is why she enjoys welcoming new members into the community so much. 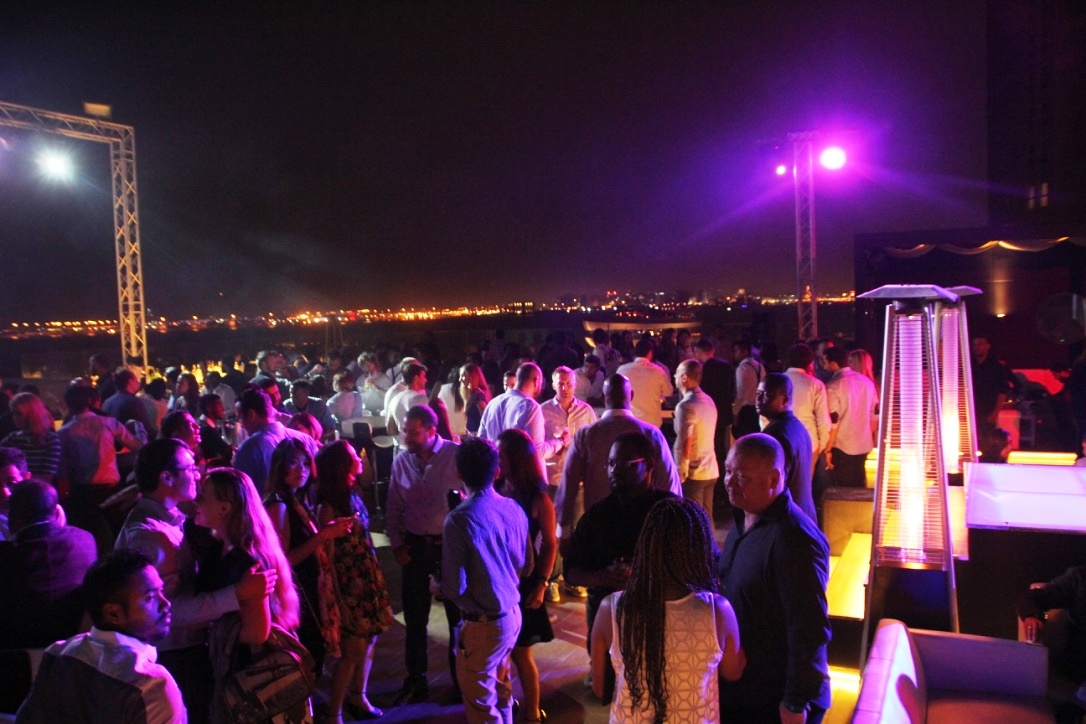 We discussed some of the challenges inherent in establishing Newcomers’ Events in Qatar, particularly in making expat women feel comfortable and truly welcome at our events.

Later on, Mark stopped by to pick me up for the second part of my trip round Doha. That time, it was a day full of stark contrasts. First, we visited the Pearl — an affluent neighborhood with luxury apartments overlooking the sea and numerous yachts swaying gently in the harbor. Afterwards, however, he drove me to the camp for migrant laborers that is supported by the local InterNations Volunteer Group. 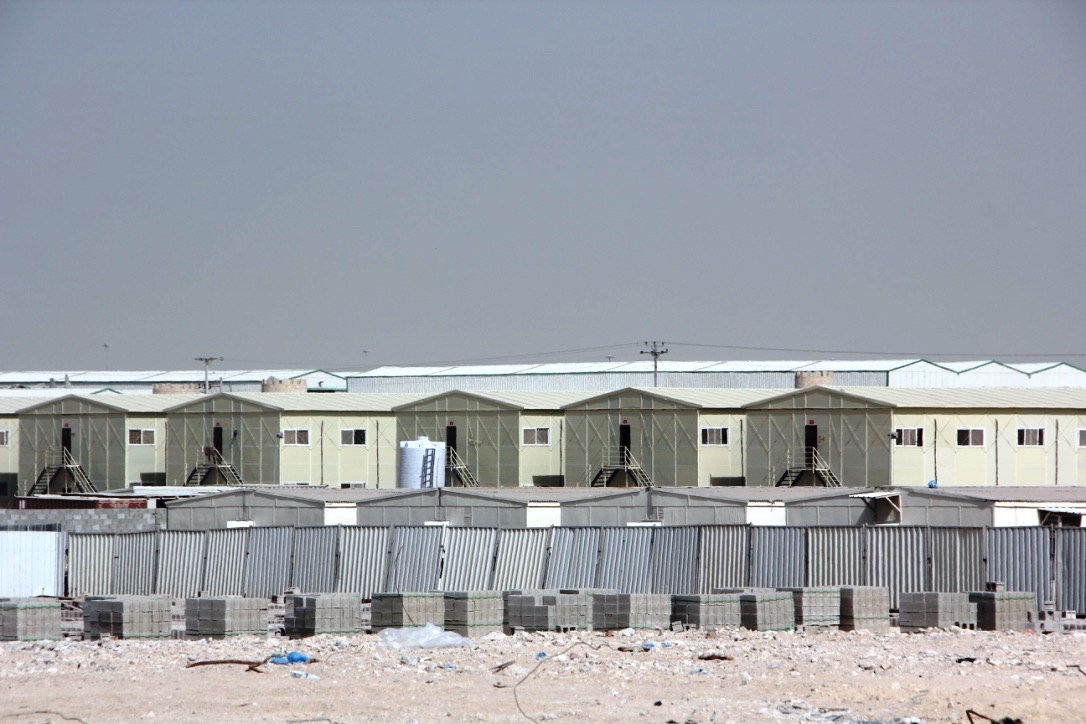 Countless hired workers — mostly from India, Nepal, and Pakistan — have to live in a gated camp in the desert outside the capital, about an hour’s drive from Doha. Often, these people have left their homes for a better life in Doha, but were promised much more than they actually got upon arrival, where tough working and living conditions awaited them. Stories like theirs are the dark side of international mobility and globalization, and these laborers are separated from the glittering center of the capital by a distance far greater than the dirt road through the desert.

Eventually, we returned to Doha for a late lunch at the Hyatt Hotel, where Mark introduced me to his wife and his two little daughters. 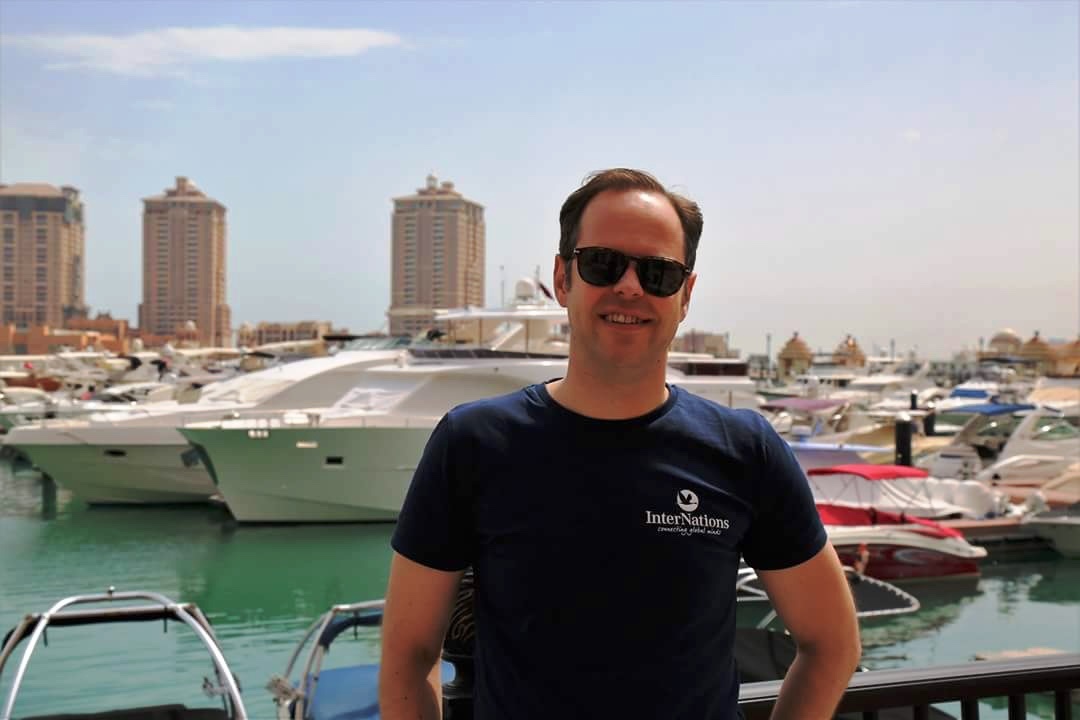 After another lively exchange of ideas concerning the future of the Doha Community, I briefly relaxed at my hotel room before my night flight back to Munich, via Kuwait City and Frankfurt, left shortly after midnight.

It was really great to see how well known InterNations is in Qatar — with over 20,000 members and more than 60 InterNations Groups, we have a very prominent status in the Gulf region!