It’s that time of the year again when Munich’s residents dust off their Lederhosen and Dirndl to join millions of tourists for the biggest event of the year: the Oktoberfest! InterNations team member Gregor shares his own take on this Bavarian festival and its exports.

I’ve been living in Munich for just over four years now. In fact, I arrived on the 21st of September 2010, three days into the 200th anniversary of the Oktoberfest. I got my one-year visa in the morning, bought a pair of Lederhosen in the afternoon, and I was at Oktoberfest the next day in the Hacker-Festzelt (Hacker Beer Tent) with my German friends. In the picture below, I’m second from the left: the young man with a Maßkrug – pronounced muss kroog – of beer in his hand, and a big, cheesy grin on his face.

The Bier was flowing, the Humpta (“oompah”) music was playing, people were singing, and everybody was meeting and talking to strangers in a variety of languages; most importantly, it was gemütlich, a word almost without translation in English, but it means something like a jovial, cozy, friendly atmosphere. I fell in love with the Oktoberfest, colloquially called the Wiesn (meadow) by locals, after the location’s formal name, Theresienwiese, which means Therese’s Meadow.

The Theresienwiese got its name, and the Oktoberfest its origin, from Bavarian Crown Prince Ludwig’s marriage to Therese von Saxe-Hildburghausen in 1810 – he was later to become King Ludwig I. In a grand romantic gesture, he named the meadow after her and threw a Volksfest (people’s festival) to celebrate their marriage, though it’s unlikely these affectionate acts made up for his philandering later on! All the people of Munich, including the commoners, were permitted to attend the festival. It culminated in a horse race at the end and was so popular that the people of Bavaria insisted on another one the following year. Thus, the Oktoberfest was born!

Being Australian, I’ve always had a love for beer. A cheeky drink with friends and colleagues after work rounds off the day nicely, in my opinion. I particularly enjoyed it back in Oz in September and October when Sydney’s own Löwenbräu Keller pays homage to the original Oktoberfest by throwing a mini one just near Sydney Harbour (picture below). Of course, it doesn’t quite compare to Munich’s Oktoberfest, but it is a nice little slice of Bavaria in the middle of Australia’s largest city. 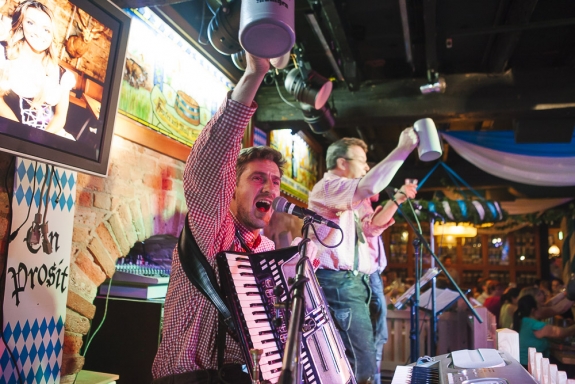 After living in Munich for several years and enjoying many a Wiesn, I was surprised to find out that there are many more towns and cities around the world that celebrate Oktoberfest. Some of them, like the Kitchener-Waterloo Oktoberfest in Canada, first began over forty years ago. I find it fascinating that an icon of Bavarian culture and tradition has spread to all the corners of the globe, so I decided to take a closer look at some of the weird and wonderful “Oktoberfests” around the world.

The Chinese have a talent for imitating and reproducing technology; since 1991, they’ve also been recreating the Oktoberfest – kind of. Eight-hundred kilometers south of Beijing, the city of Qingdao celebrates the Bavarian Oktoberfest, with a Chinese twist.

What started out as the city’s beer-themed 100th birthday celebration has now become an Oktoberfest-influenced, internationally-renowned beer festival. You’ll find Bavarian Bier here, among many other things, but instead of eating Brez’n (pretzels) or Schweinshax’n (pork-knuckle), you are likely to have a plate of skewered prawns, pickled peanuts, or grilled squid! So, while the interpretation of Oktoberfest is rather loose – especially considering the karaoke competitions – the festival, nevertheless, attracts two to three million visitors per year. 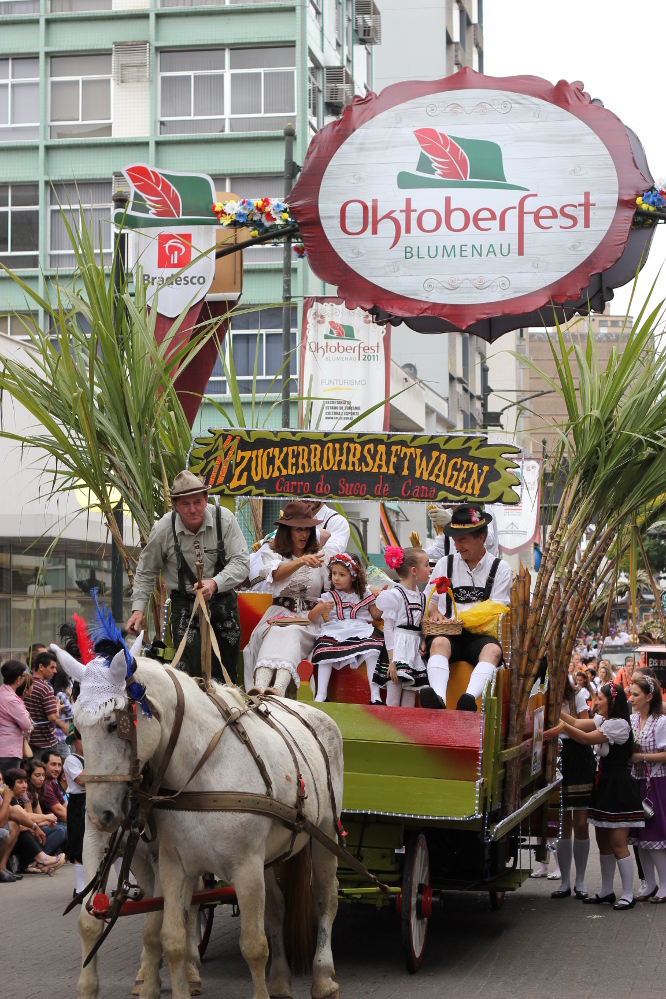 When people think of Brazil, it’s not usually Lederhosen, Bier, and Wurst (sausages) that come to mind; but, in the city of Blumenau, that’s exactly what you’ll find! The majority of Blumenau’s 300,000 citizens have German heritage, their ancestors having migrated from Germany to Brazil as far back as 1850 when it was founded as an agricultural colony.

Today, it seems tradition is alive and well: Every year Blumenau hosts its very own Oktoberfest over eighteen days in the middle of October, featuring an official parade (picture), bands, and folk music groups. The festival attracts around half a million people, and is considered South America’s largest German festival, as well as one of the largest Oktoberfests in the world! 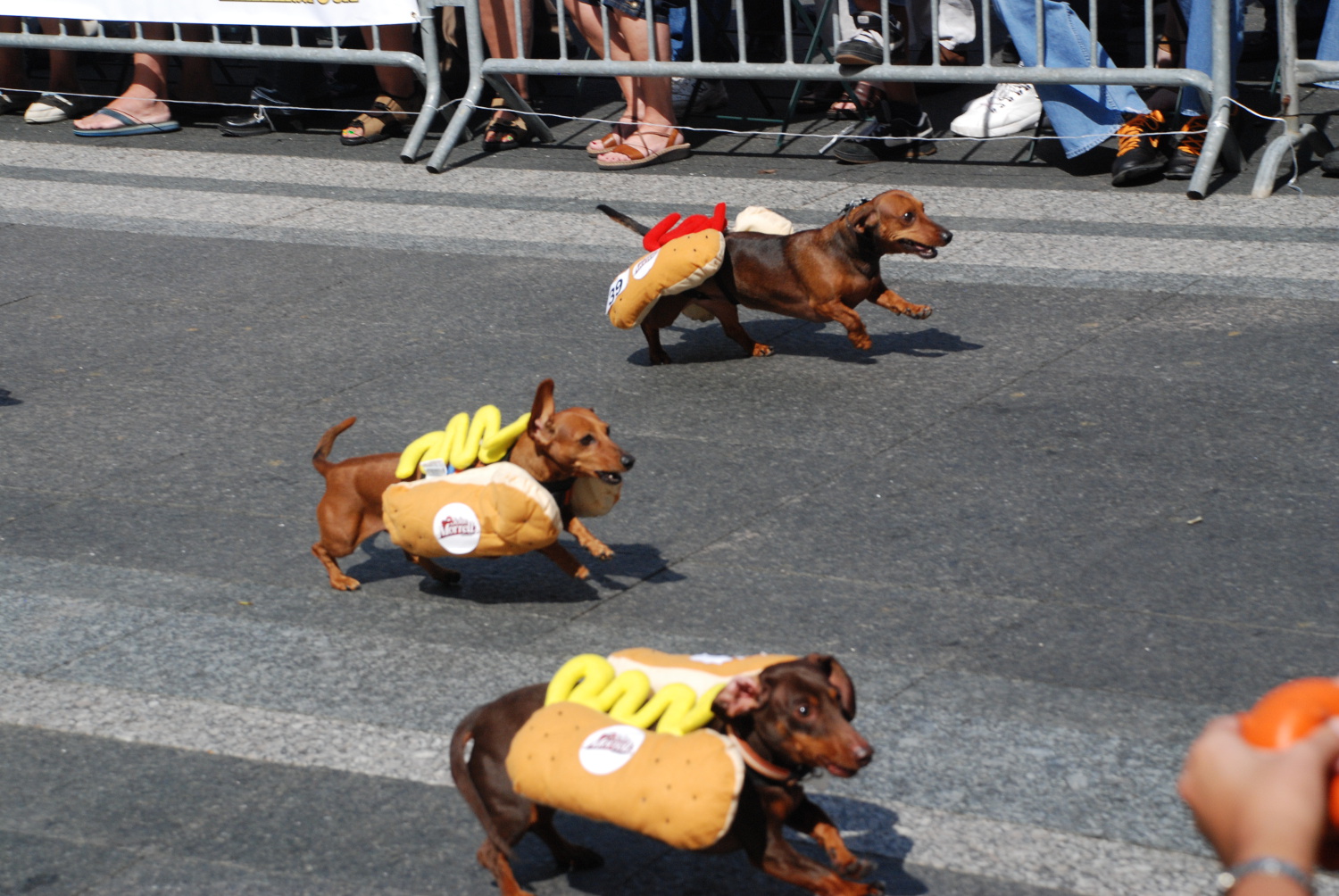 Cincinnatians have been celebrating Oktoberfest since 1976. Last year, around 650,000 visitors indulged in Bavarian music, food, and Bier over three days. The festival also features some rather unique events, including “wiener dog” races and – allegedly – the world’s largest group Chicken Dance. 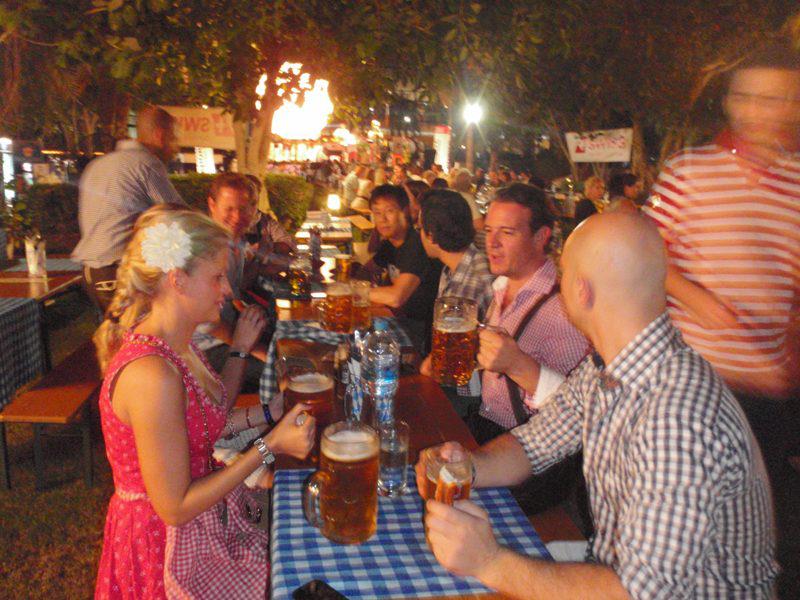 It seems the Oktoberfest has even made it to the Middle East in the last few years. Among others, venues such as the Grand Hyatt Hotel, Dubai Sports City, and the Dubai International Marine Club celebrate in Bavarian style throughout the month of October. In an effort to make the experience as authentic as possible, beer tents are set up, Bavarian cuisine and Bier are served, and Bavarian bands, such as Die Kirchdorfer and Die Derby, are flown in to entertain the crowds. Unlike the Wiesn in Munich, though, events are ticketed and participants must be over twenty-one years of age.

The second-largest Oktoberfest outside Bavaria is held in the twin towns of Kitchener and Waterloo. Over 750,000 visitors each year take their pick from nineteen Festhallen (festival halls) and forty family and cultural events. In its program, the festival even features a 5km fun-run and a 50km or 100km cycling race. What’s more, you can drink and eat guilt-free because much of the money spent goes back into local community organizations. According to its organizers, hundreds of thousands of dollars are raised each year from the Kitchener-Waterloo Oktoberfest. The Fest even has its own mascot; Onkel Hans is an oddly orange-colored, green-lederhosen-wearing character with an enormous moustache and a red hat that says Prosit (cheers!) on it. If you look closely at the photo above, you may spot Onkel Hans winking at you.

Where do you celebrate Oktoberfest?

The Wiesn-Season is upon us and I’d like to know more about Oktoberfests around the world. Where are you celebrating Oktoberfest? What’s the funniest or strangest Oktoberfest you’ve been to? What’s the best one? Leave a comment on this post and tell the other readers and me about your experiences.