After my last two visits to InterNations Communities took me to Northern Europe, this time I’m heading in the opposite direction – on a two-hour flight to Thessaloniki, Greece’s second largest city and the most important in the country’s north. In stark contrast to Munich’s rather rainy summer, 30°C and Mediterranean sunshine await me. 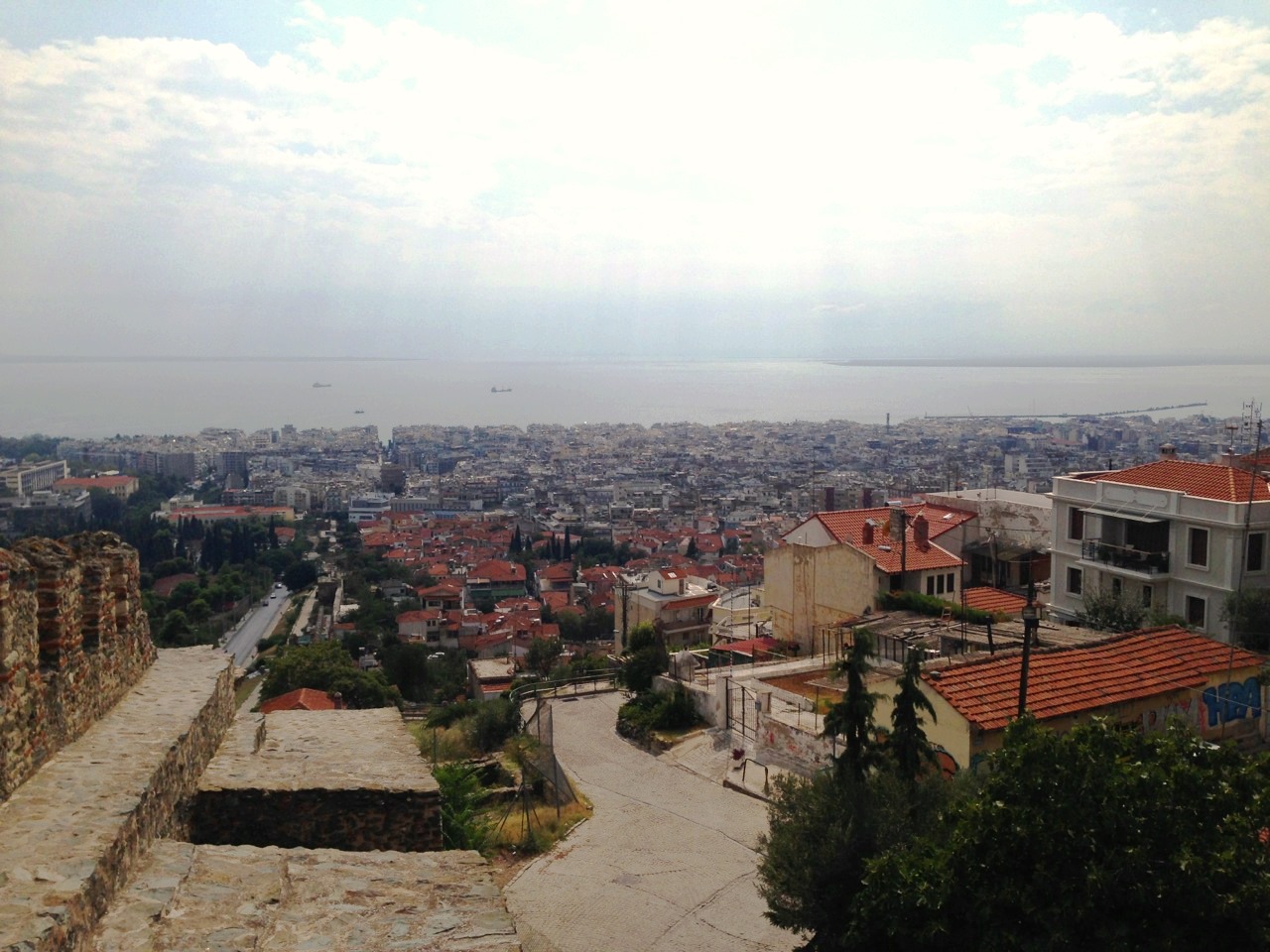 My accommodation, the Bristol Hotel, turns out to be an excellent choice: It’s located on a quaint little square with plenty of restaurant, bars, and cafés in the neighborhood. Even better, the hotel is just a short walk from Thessaloniki’s waterfront promenade, as well as the picturesque upper town (ano poli), a little further inland.

Before our get-together starts, I still have a bit of leisure time left to explore the ano poli, with its historical houses, magnificent churches from the Byzantine era, and the old fortress (kastra) that provides a splendid view of the cityscape, the port, and the gulf opening into the Aegean Sea.

The InterNations Event then takes place at Kitchen Bar, a popular venue right on the seafront promenade. The amazing view alone is worth it! 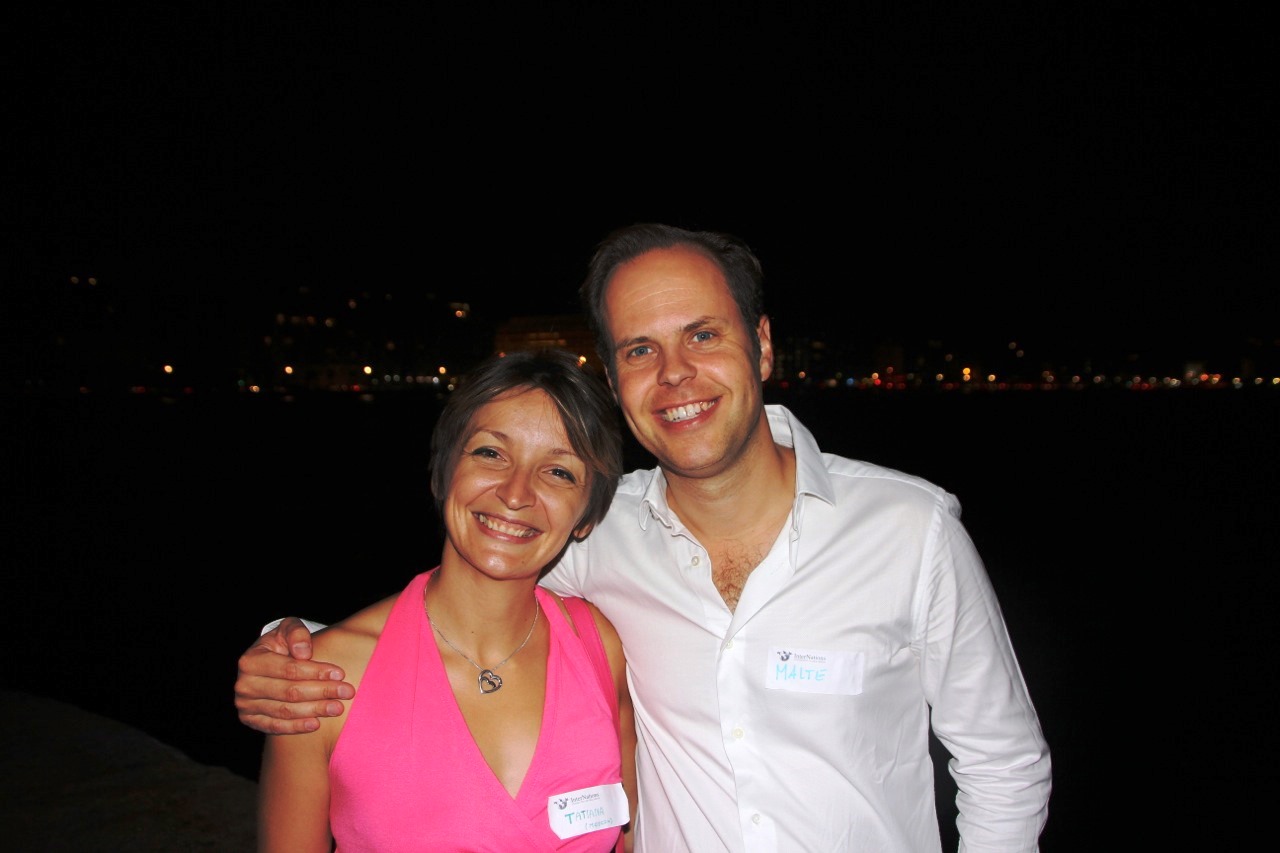 Unfortunately, Daniel, a Spanish expat and one of our InterNations Ambassadors, as well as the Group Consul for the Thessaloniki City Trotters, can’t make it tonight, but Tatiana from Russia, his fellow Ambassador, has brought back-up: Her cute little daughter greets the guests together with her mommy – together, the two make a wonderful welcome committee.

About 35 InterNations members show up to enjoy the mellow August night and to refresh themselves with a cool beer from the Greek Alpha brewery. There’s plenty of time to chat, mix and mingle, and many a member has an interesting biography to share: 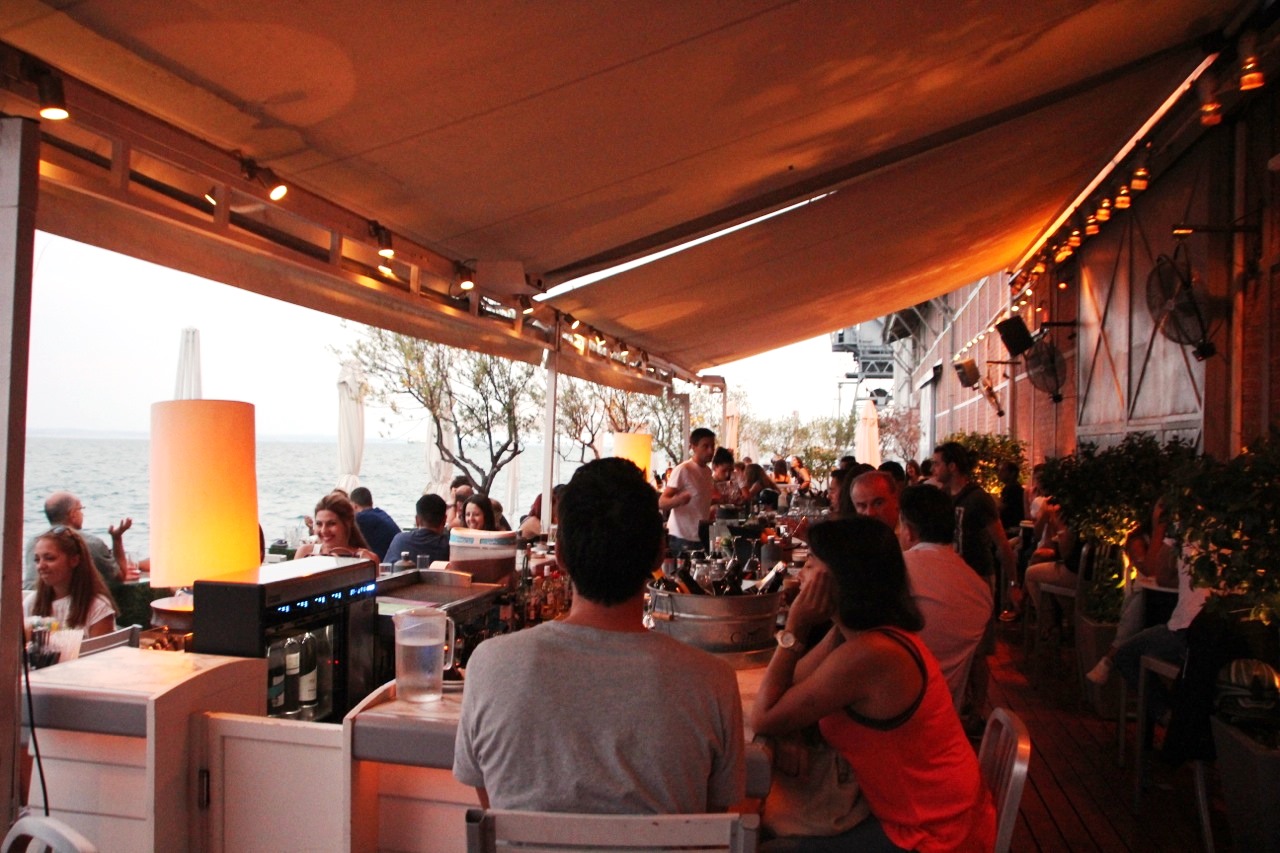 One spends half of the year in Australia and the other half in Greece; another is an artist who has come to Thessaloniki from the UK to paint. I meet a writer from Liverpool, a law student from Kiev, and various other people whose path in life has led them to this bustling city, “the bride of the bay”.

At the moment, our Thessaloniki Community is still fairly small, with about 800 members, but that could change soon: The city of Thessaloniki has over 800,000 residents – even more if you count the entire metropolitan area – and a sizable expat population.

The guests at our event also give me a great selection of sightseeing tips for the next day: Unfortunately, the famous beaches on the Chalkidiki peninsula are somewhat too far for my tight schedule. However, I just follow another suggestion and rent a bike at the hotel to ride down the long seaside promenade.

I make a brief stop when passing the White Tower, the landmark of Thessaloniki. 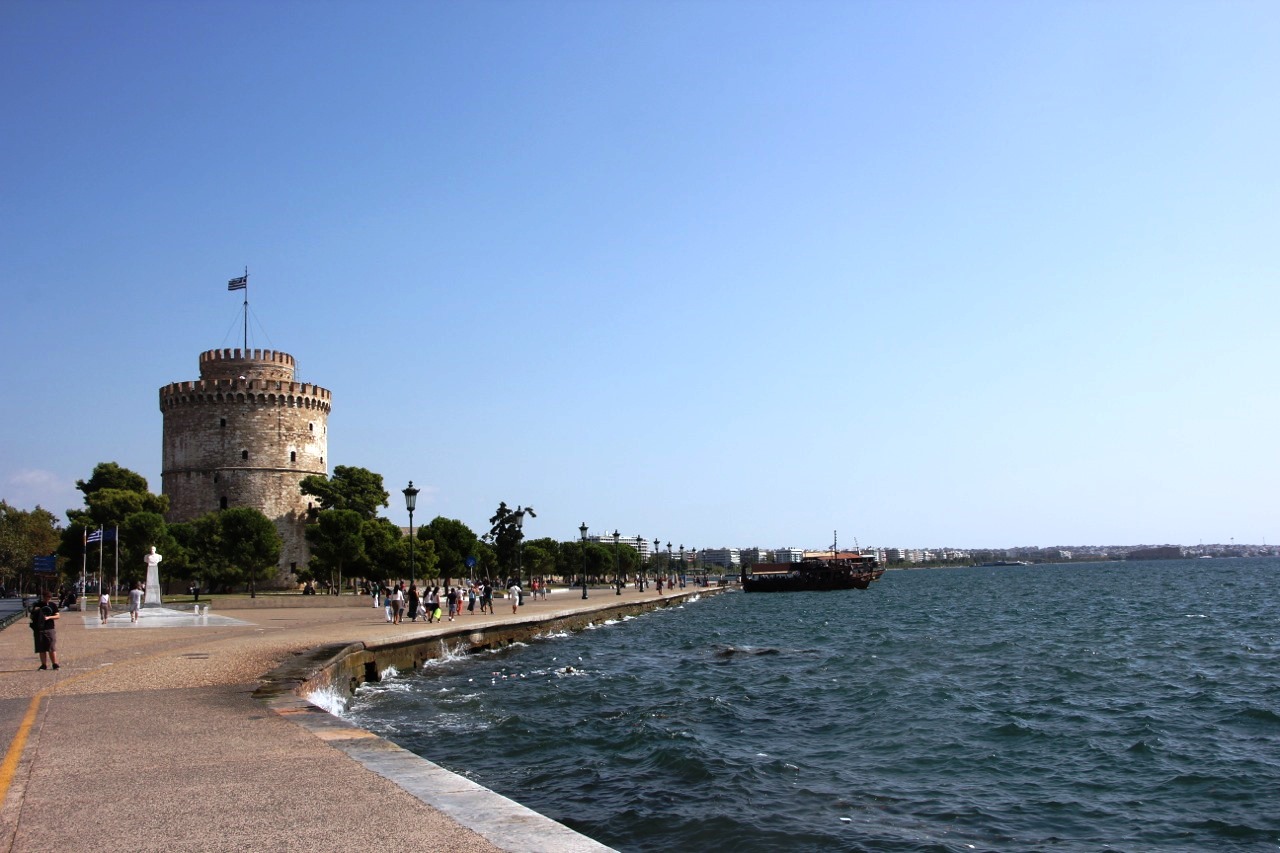 Today, it looks rather romantic – a strong and squat fortification surrounded, somewhat incongruously, by well-tended flower-beds.

The White Tower’s notorious past is more the stuff of horror movies than the stuff of romance, though: It used to be an Ottoman fort, military garrison, prison, and execution site, once nicknamed “the Red Tower” or “Tower of Blood”. Fortunately, in the 21st century, it just serves as the local history museum.

And onward I go, riding along the waterfront, till I get to take a break at Omilos, another one of Thessaloniki’s many cafés and bars with a truly spectacular view of the Aegean. On my way back to the city center, I encounter plenty of young people, teenagers and families with kids, all coming out in droves to relax in the sea breeze and soak in the fine summer weather.

At the Plaza restaurant in the vibrant Ladidaka district, I get to enjoy an authentic Greek dinner before I set out in search of some typical Greek entertainment. Again, plenty of people have suggested going to one of the local bouzoukias.

Bouzoukias are a fixture of nightlife in Greece, live-music venues for popular performers, where shows go on till the early hours of the morning. The bouzoukias of Thessaloniki are mostly located somewhat outside the city, close to the airport, about a 30-minute taxi ride from Ladidaka. 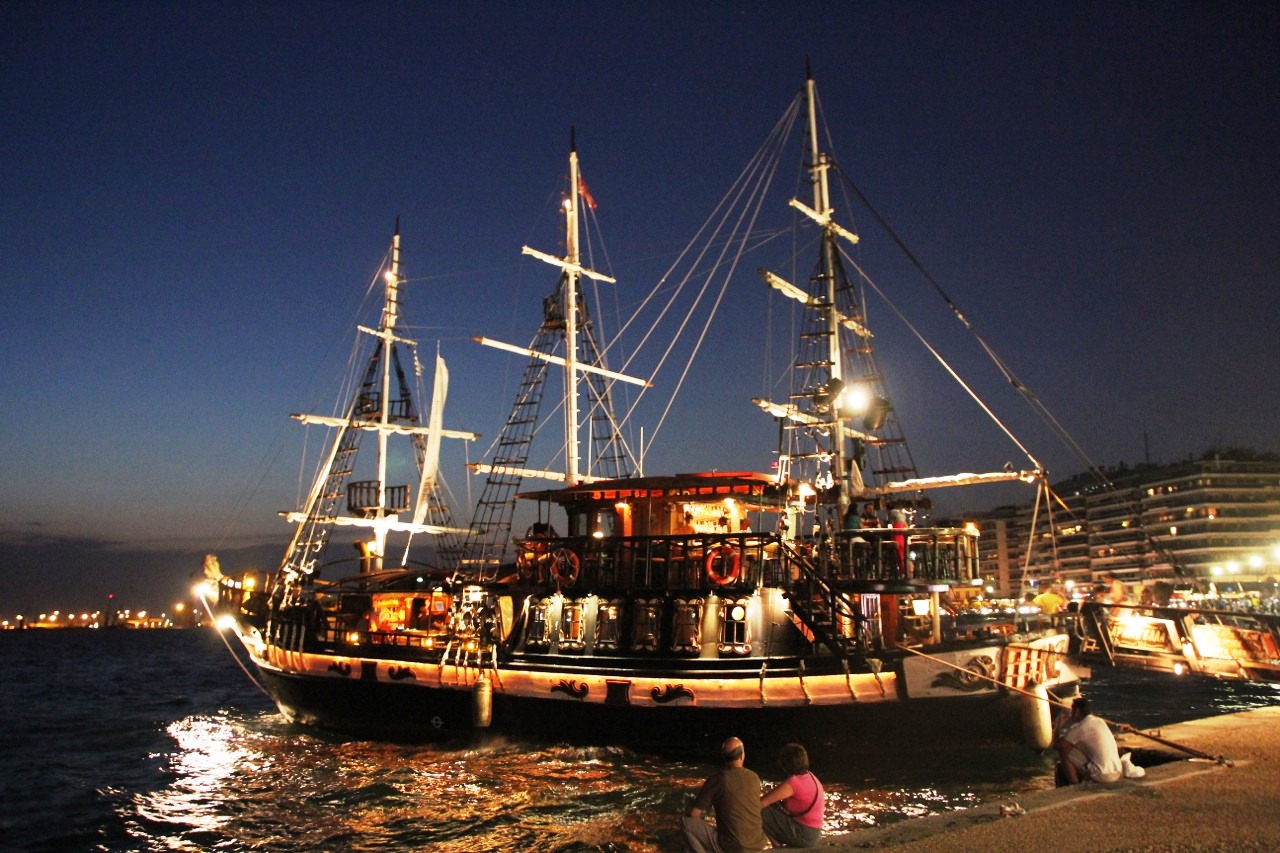 So I finally enter a bouzoukia long after midnight, not quite knowing what to expect. It’s actually a concert hall packed with elegantly dressed people, where a live concert of Thessaloniki’s pop/folk idol Nikos Vertis is in full swing.

Unlike the shows I’m used to, there’s not much dancing going on in the audience, but the people seem to be quite the devoted fans: Standing at their tables and all around the stage, they keep throwing flowers – especially carnations – at him and are beside themselves when they catch one that he throws back into the crowd.

It’s a really electrifying atmosphere, and I almost forget that it’s nearly 3 am and that I won’t get much, if any, sleep before I have a plane to catch…

The beaches of Chalkidiki will just have to wait until next time.