Malte, InterNations founder and CEO, shares his fresh impressions of our expat communities in the United Arab Emirates.

Recently, I had the amazing opportunity to visit several InterNations Communities during one single trip. Spending my vacation in the United Arab Emirates, I seized the chance to attend InterNations Events in three cities. 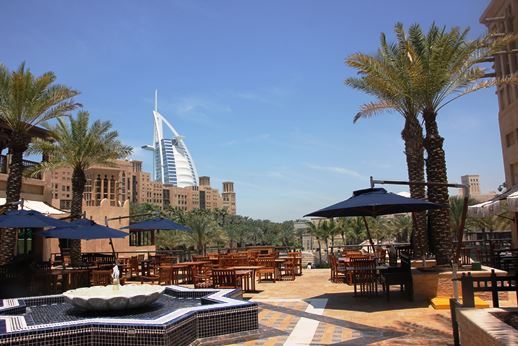 In late April, a six-hour night flight took me from Munich to Dubai, where I arrived somewhat bleary-eyed at 6 am. The difference in temperature was a bit of a shock as well: I’d left behind a grey and cool city with April showers and 5°C outside, but I arrived in a desert climate with blinding sunshine and 30°C. I spent two weeks in the Emirates, and it didn’t rain once.

A one-hour taxi ride took me from Dubai to Ras-al-Khaimah (RAK), one of the smaller emirates, especially in terms of population. Only 170,000 people live there; on the way to RAK, we mostly drove through the vast desert and empty coastal plains. We even passed herds of free-roaming camels along the way. 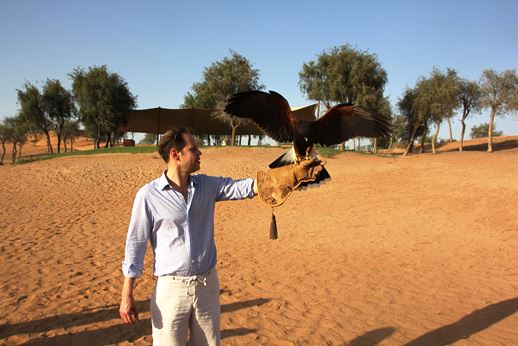 When arriving in RAK, I immediately noticed that the atmosphere is rather different from Dubai. It’s a far less crowded place with fewer tourists and a more relaxed ambience. I very much enjoyed having a few days of vacation to myself. The warm weather was ideal for lounging on the beach, swimming in the hotel pool, and playing some rounds of golf.

Still, I was definitely looking forward to the InterNations RAK Event on April 21. We have circa 1,000 members in Ras-al-Khaimah, but our gathering was a small, cozy affair. About 30 people from 15 different countries met up at Cove Rotana Resort, a lovely village-style hotel round a lagoon, with our bar directly on the beach.

Unfortunately, Celine, an expat from Mauritius and our RAK Ambassador, couldn’t make it, as she was traveling. However, she’d still managed to organize the event, and members like Cleo, Bruno, and Ali gave me a warm welcome in her stead.

The tight-knit gathering gave me a great, familial feeling: It really was a bit like meeting an extended family of friendly, easy-going expatriates, where I actually managed to talk to everyone in person – something that’s obviously no longer possible at our larger events. They even presented me with two nice photography books about the UAE and Saudi Arabia as a welcome gift. Thanks again for the surprise!

Despite the smallish size of our get-together, I had the distinct impression that RAK is a pretty lively InterNations Community. Consuls such as Yvonne, from the Arabic Conversation group, Sebastian (RAK Outdoor Adventures), as well as Cleo and Karin – who run the InterNations Foodie Club – come up with plenty of fun activities for our members. 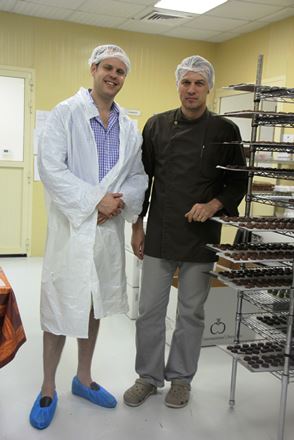 Thanks to Celine, I also got to participate in a falconry show at the Hotel Banyan Tree Al Wadi, organized by Ryan, a local InterNations member. Daniel – another of our members in the UAE – then provided me with yet another fascinating opportunity: a visit to a real Swiss chocolate factory in the middle of the Arab desert. Thank you for all these fantastic activities!

After one week of vacation, I was off to Dubai, where InterNations member Gay Mendoza kindly helped me find a comfortable hotel for my stay. Unlike RAK, Dubai is huge and very busy: Over 35% of the UAE’s entire population, nearly 2 million residents, live there. 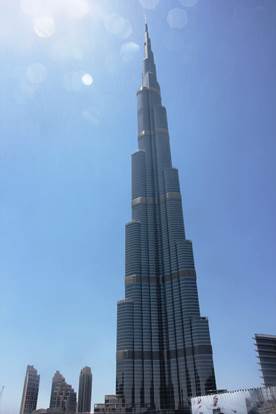 Therefore it’s no wonder that the drive took over two hours, as we got stuck in traffic a lot. From the car window, I spotted the Burj Khalifa, the world’s tallest building: The glittering, needle-like structure is an unmistakable landmark in Dubai’s sprawling skyline.

However, I didn’t see much of Dubai at first. Together with Philipp, a German expatriate who has been our InterNations Ambassador in Dubai for several years, we drove another 1.5 hours to Abu Dhabi, the UAE capital, where we met up with the local Ambassadors team.

Our booming Abu Dhabi Community (with over 14,000 members) is run by three hospitable expat women: Loretta from Canada, Farrah from the Philippines, and Maha, another Canadian expatriate. The three jokingly call themselves “Charlie’s Angels”, after the popular 1970s TV show with actress Farrah Fawcett. And they are just as full of charm and can-do spirit as their television heroines! 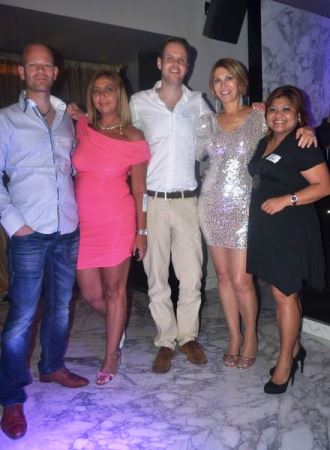 I invited the angelic Abu Dhabi Ambassadors team for dinner at the Imago Restaurant and Bar of the Royal Méridien Hotel, where our event was to take place later on. Over the delicious food, we avidly discussed the future of our growing expat community before the guests started arriving.

240 people had signed up for the get-together, and the three Ambassadors did a great job welcoming them and introducing our members to one another. Thus I also got around to talking to quite a few expats living in Abu Dhabi. I learned a lot about the structure of the Emirates (a federation of seven principalities ruled by sheikhs) and the differences between such places as the capital and Dubai, the principal business hub.

A few days after the gathering in Abu Dhabi, it was finally time for the InterNations Dubai Event. Dubai isn’t only a major business hub in the Gulf region, but also one of the world’s top expat hotspots. In fact, most of the residents are foreign nationals rather than Emirati citizens.

It’s hardly surprising that InterNations has over 40,000 members in Dubai, our second largest Local Community, right after London. That night, nearly 680 people were on the guest list for our event. 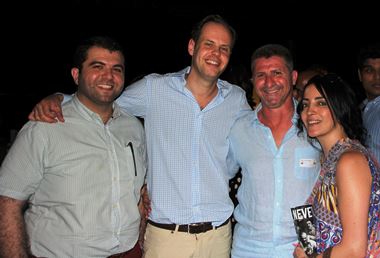 The InterNations Event took place at the Pure Skylounge, located on the 35th floor of Hilton Dubai The Walk Hotel, a rooftop terrace with splendid views of the Palm Jumeirah, an artificial island off the coast. Nina, our second Dubai Ambassador, was so kind as to organize the gathering while she was out of town.

Philipp and I were there to host the event, and I was introduced to a great many members from Dubai. I particularly remember our Group Consuls Waleed, Ibrahim, and Anas, all very committed to running various Activity Groups in Dubai.

Fortunately, I also had plenty of time to thank our volunteers for their time and energy: They are essential in creating such an active and busy expat life in Dubai. For instance, we have over 100 different InterNations Activity Groups, with nearly 100 Activities per month – there’s really something to choose from for everyone!

After the official event, I have a few more days left in Dubai. 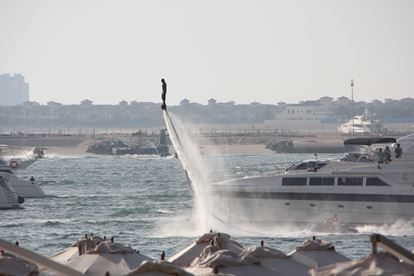 So I did a bit of sightseeing, visiting the Dubai Mall (an enormous “temple” of consumerism), the Fountains (an illuminated fountain system with special performances set to music), Deira and the Gold Souk, and the Madinat Jumeirah, a new souk with views of the Burj Al Arab. I also got to admire the “jet-flyers” on the waterfront – a new trendy kind of sport that everyone seemed to be crazy about.

It must be interesting to live in such a dynamic, fast-changing city: I’d been here before, 10 years ago, and it feels as if half the city hadn’t even existed back then.

Soon enough, it was time for my flight back to Munich, though, where I landed on another cold spring day. Another heart-felt to thank you to everybody who made my trip to the UAE such a success!