InterNations team member Christin, a US expat living in Munich, goes on a trip to Verona, Italy, for the romance-themed town festival called “Verona in Love”. But it’s the city itself that she falls in love with.

The day before Valentine’s Day, I found myself sitting on a park bench at Porta San Giorgio, a small park along the Adige River, staring at the backdrop of the Verona cityscape. The imposing duomo on the other side was eclipsed by the setting sun, and local Veronese were walking their dogs on the torn-up sidewalk. It was hard for me to believe that earlier that morning, I had boarded a train in snowy Munich. But here I was, just getting to know fair Verona, of Romeo and Juliet fame. 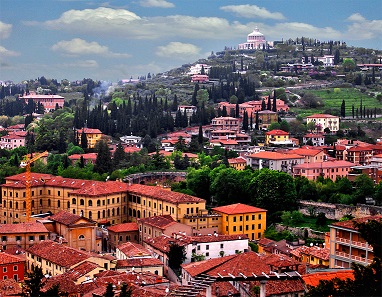 Every year around this time, the city celebrates Verona in Love, a four-day festival when Italy’s city of love comes to life with romantic markets and performances.

On my first day, I explored the old town, which has made Verona a UNESCO world heritage site. I discovered the Castelvecchio, a medieval castle connected to the Scaligero Bridge, and Piazza Bra, dominated by the well-preserved Roman arena. Amusingly, the latter was juxtaposed with the street lamps along the square, adorned with giant red hearts for the festival.

Also noteworthy was Via Mazzini, the pedestrian high street decorated with hanging heart-shaped lights, and Piazza delle Erbe, a charming market square, and former site of the local Roman forum. “Juliet’s” house, on the other hand, was scrawled with graffiti and jammed with photo-taking tourists. Though an old building, it has no real connection to the Giulietta that Shakespeare’s play was based on, and the famous balcony was actually added in the 1930s to attract more tourists. 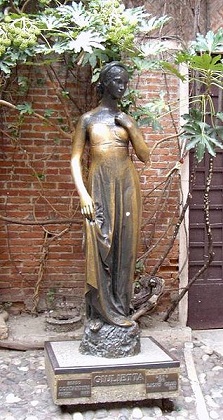 After winding my way through the maze of old alleyways, I found the impressive Pietra Bridge, connected to the ancient Roman theater and the cypress-covered hillside, with the Castel Pietro on top standing guard from the other side of the river. I walked along the Adige River, past San Giorno Cathedral to a small park, where I sat on a bench and watched the sun set.

The next morning I visited Sirmione, a small village on the shores of Lake Garda. The peninsular village is protected by the dominating Scaligero Castle, built in the 13th century. Crossing the castle bridge over the lake’s crystal waters is the only entrance to the town. The quiet village was dotted with an abundance of pizzerias, cafés, and gelaterias, which are bustling with tourists in summer. I spent the morning strolling through the cobbled alleyways, along the azure waters of Lake Garda, lined with the snow-capped Dolomites looming over the northern shore. Before returning to Verona, I paused for a pizza and a pistachio gelato, al fresco at one of the castle’s adjacent cafés.

After a bit of rest, I decided to enjoy Verona by night. Most of the Valentine’s Day themed attractions were already closed, but I was fortunate enough to get a taste of the chocolate market that had opened at Piazza Bra, where I discovered my new favorite beverage, cioccolata bianco (hot white chocolate). You have not had a proper hot chocolate until you have tried the Italian version, thick and creamy! For me, cioccolata bianco is a surprisingly mild alternative to the strong cioccolata classico (classic chocolate). 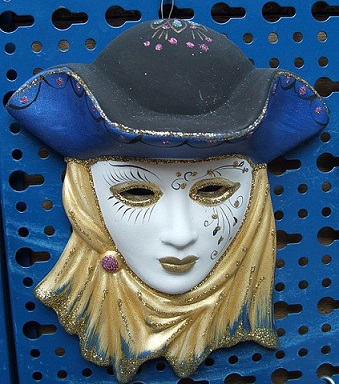 On my third day in Veneto, I set out on an excursion to the city of Venice. I had been there six years before, but since it was only an hour and half away by train, I couldn’t resist coming back. I spent the day exploring the alley-like canals and small shops, famed for selling intricate Murano glass, and revisited the grand Piazza San Marco and Rialto Bridge before returning to Verona that evening.

Back in the old town, I decided to try a Veronese restaurant near the new theater called “La Taverna di Via Stella”. My meal consisted of polenta (a cornmeal side dish), followed by Bigoli con Caval (thick pasta with horse ragout) and paired with a glass of Bardolino wine, native to the region. Horse is a specialty of Verona. After having tried it, I can now understand how it could have gone unnoticed for so long in certain convenience meals that you could find at many supermarkets across Europe until the recent food scandal. But actually, I much prefer it at an Italian tavern rather than hidden in canned Spaghetti Bolognese!

Love in All Its Shapes and Forms

The following day, I finally had the chance to enjoy some more of the Verona in Love festivities. In the Piazza dei Signori, I visited a small market that sold regional food, wine, and love-themed crafts. Nearby was the Cortile Mercato Vecchio, made famous by the Lamberti Tower. Here was a pink heart-shaped square where onlookers could enjoy live music, leave love letters, and have their names etched in Gothic writing in seals of love. Little girls were playing in the square with pink balloons, and couples of all ages had their photos taken while a teenage band played “Hallelujah,” by Leonard Cohen.

In Verona, it feels like the holiday does not only celebrate couples, but rather the feeling of love in all its shapes and forms. I walked back through the city one last time before catching my train back to Munich, hoping that the warm and fuzzy feeling I now had might help me to brave the cold wintery weather awaiting me back home.

What’s your favorite town festival? And the most romantic city, in your opinion?