In three days, we will be preparing to welcome the beginning of a new year and, hopefully, plenty of good health, good fortune, and general happiness. Of course, there are many more New Year’s celebrations round the world than the New Year’s Eve of the Gregorian calendar on December 31st.

There’s the Chinese Lunar New Year, which falls on February 10 in 2013, ushering in the Year of the Snake from the Chinese Zodiac. Related festivals include, for example, Tết in Vietnam or Losar in the Tibetan Buddhist tradition. Nowruz, widely known as the “Persian New Year”, is celebrated in parts of the Middle East, Central, and South Asia around the spring equinox. And the New Year in Thai as well as Tamil culture doesn’t begin until the middle of April…

Still, there are plenty of traditions and superstitions associated with the Gregorian version of New Year’s Eve/Day. Some seem to be fairly widespread across cultures, like cleaning your house, thus setting your life in order, or making noise to ward off evil spirits or drive out malicious thoughts. 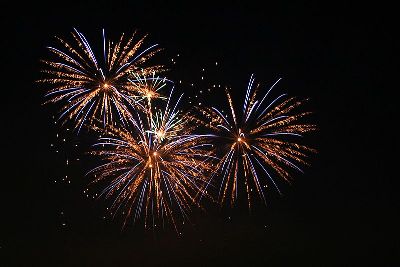 The latter explains both bell-ringing and lavish fireworks displays, with things going boom according to the most sophisticated pyrotechnical standards. Other customs differ widely from country to country.

We have picked out five New Year’s traditions for you, from food over fashion and music to television.

• In Denmark and Norway, a “proper” dinner on New Year’s Eve frequently features kransekage (or kransekaka). This famous Scandinavian dessert is also served on other special occasions, like Christmas or weddings. The towering structure of pastry rings made from egg whites, sugar, and almond flour is supposed to represent a cornucopia – the mythical horn of abundance. 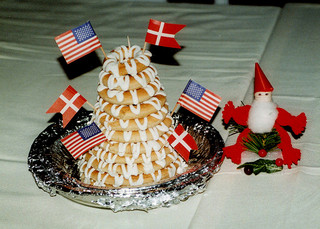 Well, there’s often an abundance of ice-cream or pudding to go with the cake!

• Nearly everyone who’s grown up in Germany will be familiar with the catchphrase: “Same procedure as last year? – Same procedure as every year!” True to these words, German television stations have been showing the same black-and-white comedy skit for the past half century. Dinner for One – which should also be familiar to audiences in Austria, Scandinavia, or the Netherlands – will have its 50th anniversary in 2013 and will be shown in its accustomed New Year’s Eve spot for the fortieth time this year. The sketch about a British butler celebrating a lady’s 90th birthday is virtually unknown in most English-speaking countries: but don’t be surprised if you meet middle-aged Germans who can recite entire chunks of the original dialogue.

• Are you a fashion-conscious fan of the recent vintage trends that have graced the runways of late? Then it’s time to break out the 1950s polka dots for New Year in the Philippines! There, however, the habit to wear dotted patterns isn’t really a fashion choice. Roundness symbolizes prosperity, and making sure to don the right kind of apparel might just guarantee you wealth for the upcoming year. If you prefer longevity to lots of money, you could simply eat pansit instead. These long noodles represent the prospect of a long life. 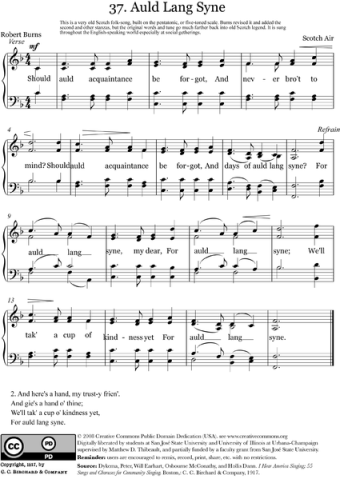 • Scotland’s New Year celebrations are called Hogmanay, though the exact origins of this word are a matter of great controversy. In addition to countless local customs and the tradition of bringing your neighbors small gifts, the practice of singing “Auld Lang Syne” is probably best know, especially outside Scotland. Nowadays, it’s used in the English-speaking world for occasions as varied as boy scout jamborees, funerals, trades union congresses, and even military colleges. However, the association with New Year’s Eve probably remains strongest, since Scots poet Robert Burns’ famous versions calls on you to remember old friendships and the good old times.

• Last but not least, you can make twelve wishes for the New Year when you hear the midnight bells in Spain. 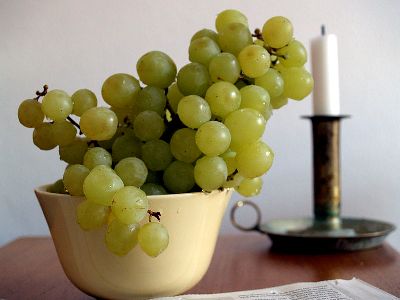 There’s just one catch: for each wish, you must manage to swallow a grape on the exact chime of the bell. If you can pull off that feat, though, your dozen wishes will come true. Maybe. This custom did bring good luck to someone: it originated in Alicante in the early 1900s, where grape-growers tried to make it popular in order to sell off the rest of their harvest. Thus fruit vendors can indeed hope for more prosperity – today, the custom isn’t only limited to Spain, but it has spread to other countries like Mexico as well.

And what are your favorite New Year’s customs? How are you going to celebrate the end of 2012?