Emilia from Rome moved to Vietnam for work and discovered that her version of traffic was anything but! In Vietnam the amount of cars and other modes of transportation completely overwhelmed her at first, but eventually she caught the vibe and now loves going from A to B in Ho Chi Minh City. 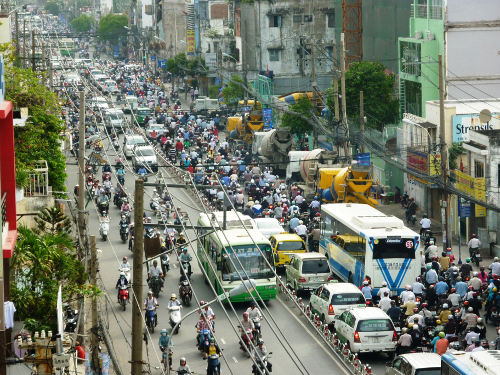 When in Rome do as the Romans do. We drive crazy, you get used to it and try to adapt! I decided this had to be my motto when I found out I was moving to Vietnam. And it’s a good thing I was prepared for some crazy traffic, because if I had come from a small romantic hillside village in Verona, I may not be here today to recount this story!
In order to better prepare myself for my new life abroad in HCMC, I read many reports on what life there is like. It all seemed very exciting and new, but I just couldn’t get some of the numbers out of my head: apparently 30 people die in traffic related accidents per day in all of Vietnam. Of course this didn’t mean in HCMC itself, but that is a lot of deaths! I wonder how many Italy has…? 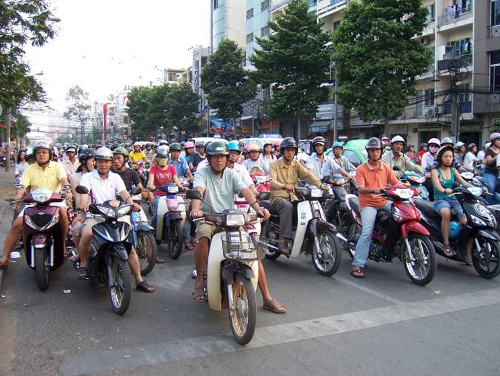 Well, let me tell you that nothing, and I mean absolutely NOTHING, prepared me for the traffic in Ho Chi Minh City! There was so much noise and so much smog and so much speed I almost fainted on my way from the airport to my new abode! The first couple of days I barely dared go outdoors for fear I may get smothered by some moving object. And there were a lot of moving objects: cars, motorbikes, bicycles, scooters, minibuses, etc. Sidewalks, it appears, are not for pedestrians only either! 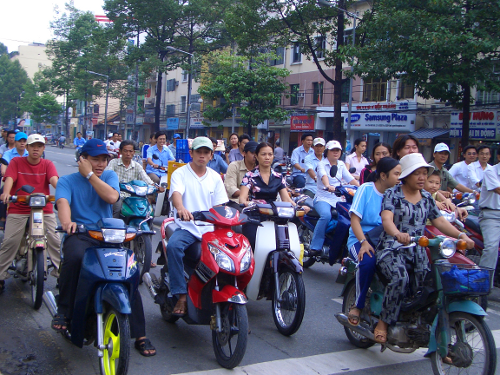 At first I decided it would be safer to walk and simply avoid using any mode of transportation, yet one day I had no choice. I was requested to go from my office to another district, which was all the way across the city, and I was asked to do it fast. Which meant my two little feet would not suffice to get me there within 30 minutes. Which meant that I would have to use a motorized object to get there. My colleague smiled at my probably very ashen face and said “hey, you can use my scooter!” I think I may have turned even whiter. But, since I am not chicken and have often ridden a scooter in Rome – which sometimes appears to be counterproductive if you fancy getting old someday – I decided to brave the traffic and try my luck. 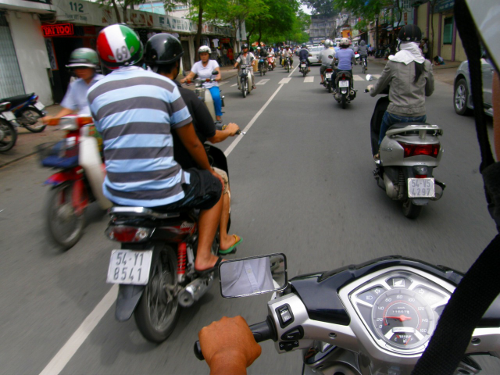 It was absolutely the most frightening and thoroughly thrilling vehicular experience I have had. Traffic was not fast, but apparently my co-riders did not believe in looking left or right, not even in front of them, they just drove, meaning I had to very quickly develop visual and auditory sensors on every point of my head so as not to end up squashed under some other moving vehicle! I made it to my destination in one piece with adrenaline pumping through my veins and all electrical synapses going off like wild in my head, causing me to feel tingly all over! Needless to say, I was hooked!
I began to enjoy my trips through traffic, and discovered that there was some strange rhythm to the way the Vietnamese drove. It was like being on some other sonic wavelength! It is thus, my friends, that I have decided to jam to the traffic and not let the traffic jam me!