Asari from Copenhagen, Denmark recounts her grandmother’s story of coming to Copenhagen in the 1920s from Ibadan, Nigeria and her initial experience of adjusting to being somewhat of a rarity in her new home.

“I was very tall and very dark and had thick long curly hair which defied every attempt at containment by any hair accessory. Even in Nigeria where many of my girlfriends had short hair, mine was an anomaly. But that was nothing compared to the stares I received walking the streets, or the whispers and hushes at cafés or museums…
It is something I did not think I would ever be able to get used to. It has nothing necessarily to do with racism, quite on the contrary, people in Copenhagen were extremely interested in my past, where I came from and what I was doing here. Perhaps that was the problem, the interest that they showed which I was not used to because I have never before felt it and somehow it felt alien to me. I would go as far as to say I felt like a rare museum collectible. It was probably strange to see a very black woman walk around in a very white Copenhagen as well back in the twenties! 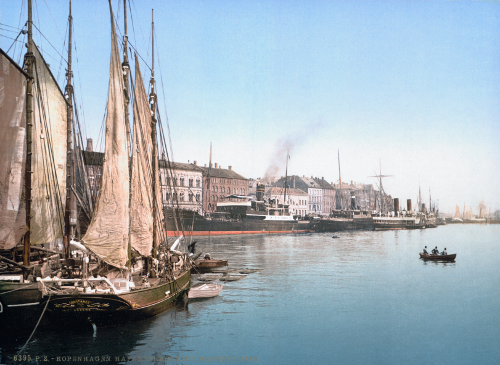 I think I also attracted attention due to my guest family – friends of my father’s, who had asked if my sister or I would be interested in coming to Copenhagen for a while to enjoy European culture. They insisted on dressing me in fabulous, expensive and bright clothes. I received many gifts from this family for which I am very grateful for their generosity. I was completely in awe of everything in this city. Sometimes I felt as if I had landed in some exotic museum and soaked up the strange architecture, the bizarre clothing and hairstyles of the Danish people and devoured all the delicious pastries!

I was so enamored of this country – despite missing my family very much and still having difficulty coping with the stares – I decided to stay in Copenhagen longer. In fact, I stayed so long that I met my husband and had my three wonderful children here, who all had wonderful children of their. I hope my travelling gene was passed on, for although I deeply loved Copenhagen and deeply loved Ibadan, I had always wanted to see more of the world and meet more exotic museum creatures!”

And her genes were passed on. I am still living in Copenhagen, but I was born in the Chicago where my mother moved when she was 18. My aunt also left grandmother’s second home and took off for Brazil, where she now lives with my cousins. And my uncle has returned to our roots and works in Nigeria, frequently coming to visit us in Copenhagen.

I just wanted to share this story with everyone because it is proof that the desire to see new lands and experience new cultures has always been around. Things have changed drastically since then and I am grateful for that! One no longer feels like my grandmother – an exotic zoo animal! – when going abroad, because thanks to our increasingly globalized world it is almost normal to find Nigerians in Denmark, Danish in Zimbabwe, or any number of foreign ethnicities in foreign lands…