As many of you now know, InterNations co-founder, Malte Zeeck, has just gotten back from his short round trip across South America. After Argentina and Chile, he visited the InterNations Rio de Janeiro Community and participated in their Event. Here is his take on the city! 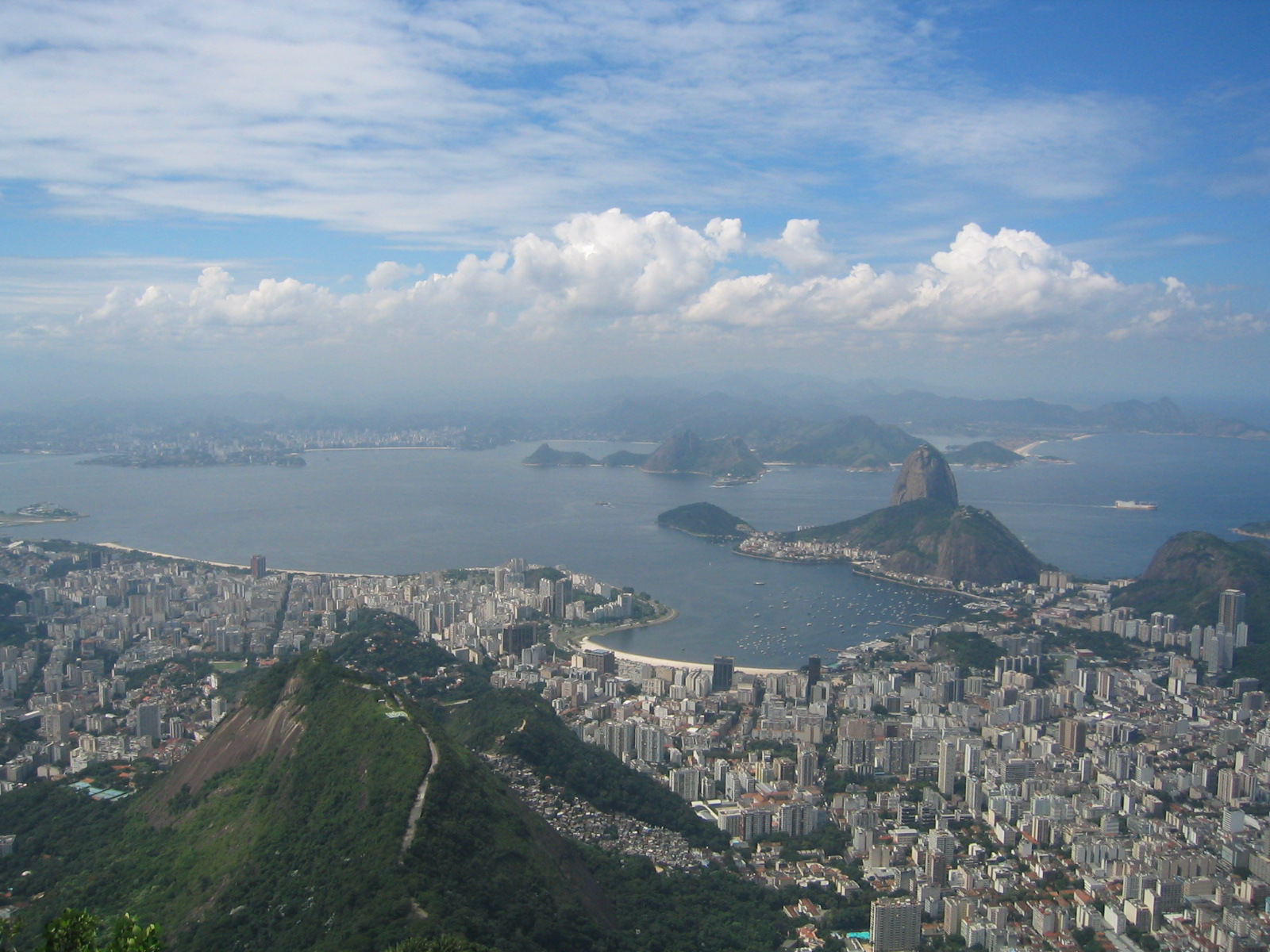 The “Cidade Maravilhosa”, the Magnificent City, really deserves its nickname! Rio de Janeiro is one of a few major cities which were built in an astonishing landscape and it is probably the most spectacular of them. There might be a few other cities such as Cape Town, Istanbul, Hong Kong, or Vancouver, that are also based in a marvelous setting but with its year round warm climate and the stunning views over its mountains and the ocean, Rio is certainly my number one choice. In addition, the allegria (happiness) which the city’s residents, the Carioca, display, is contagious, creating a relaxing and friendly atmosphere. Brazil really touched my heart. 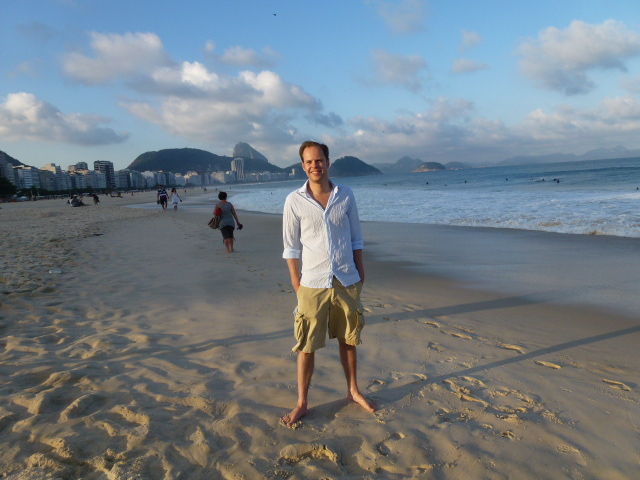 I got to stay directly at Copacabana Beach and as I had a few days in Rio I went out to explore everything that the city has to offer. I took the cog train up the Corcovado Mountain on which the 40 meter high Cristo Redentor (Christ the Redeemer) statue spreads his arms and which, next to the Pão de Açucar (Sugar Loaf Mountain), is the major landmark of Rio de Janeiro. The views from up here are spectacular and you have a view over the whole city with its ca. 10 million inhabitants. Of course you get a nice view of the beaches of Leblon, Impanema and Copacabana in the South, the Sugar Loaf, the old city center, and the famous soccer stadium Maracanã, as well. 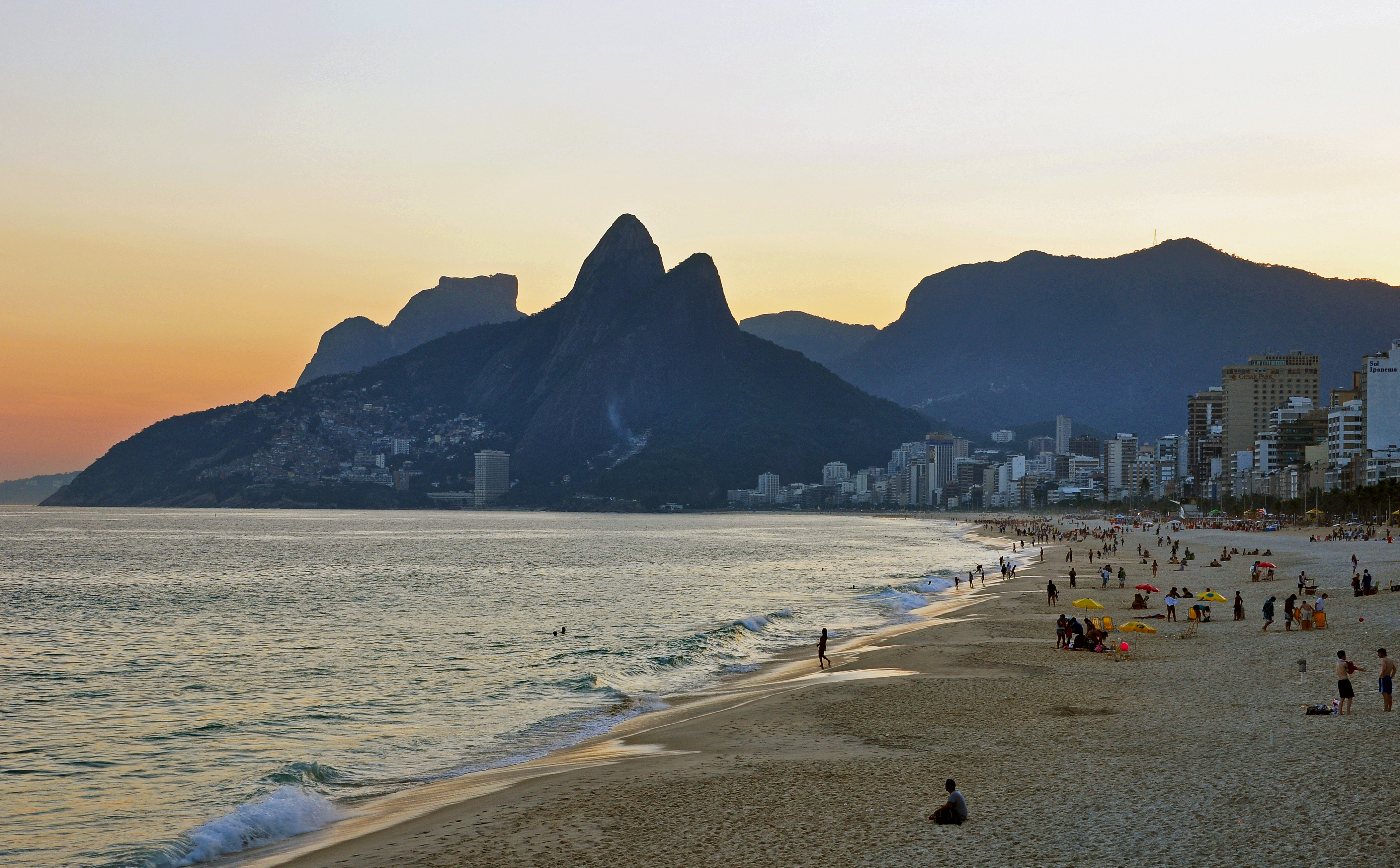 In the afternoon I rented a bike and went down to the Copacabana beach, Ipanema beach and Leblon and took the 8 km around the lagoa of Rio. Everywhere people were playing different sports: they were swimming, playing soccer, surfing, or playing beach volleyball on the beaches. All the outdoor gyms along the coastline explain why most of the people at the beach look like body builders! There are thousands of joggers and bikers on the boardwalk, and people in rowing teams on the lagoa. All this athletic activity makes sense, if you want to make a good impression on the beach in your bikini! 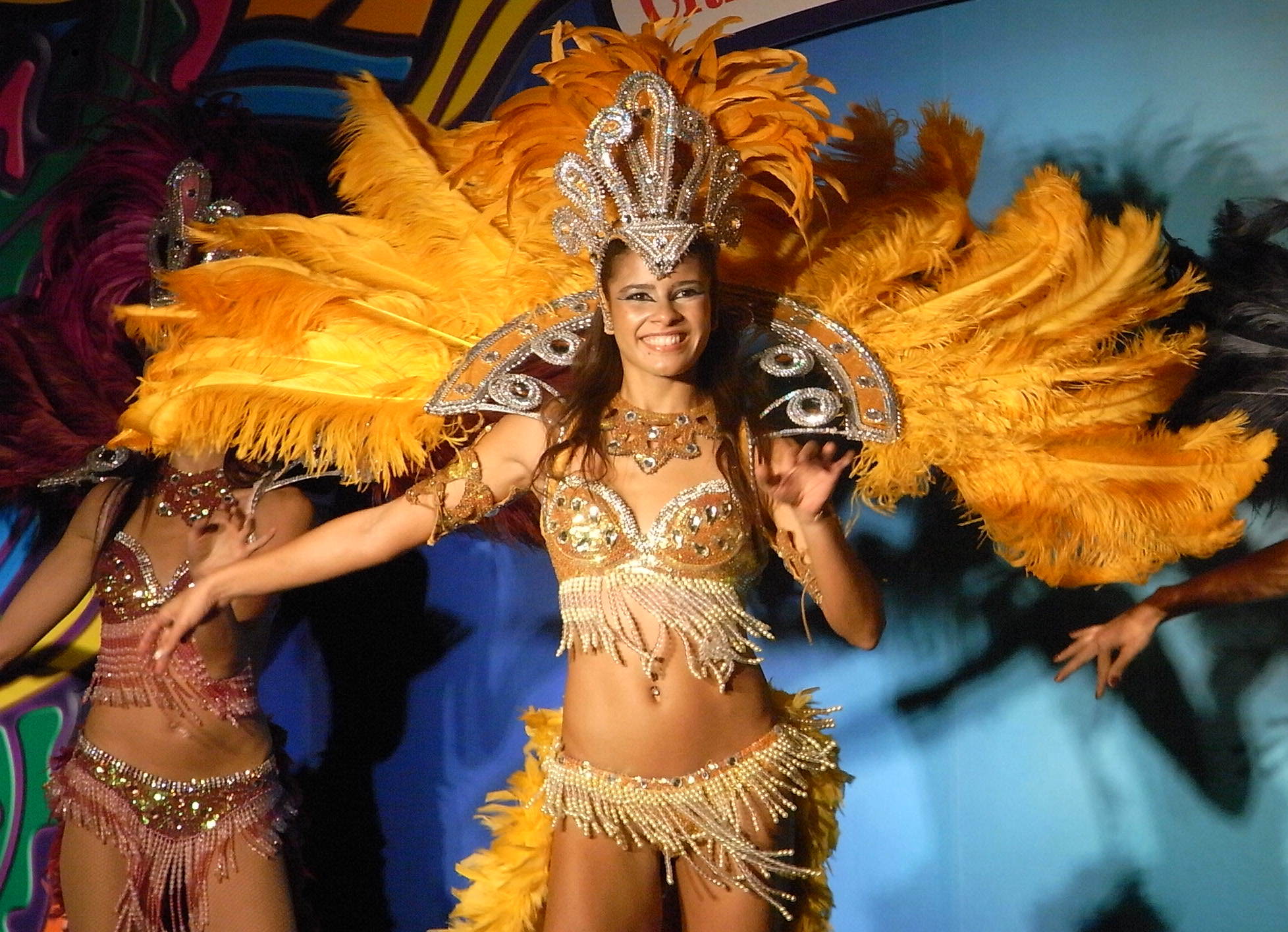 Nightlife took me to Lapa, where most places that offer live music and especially Samba bars and clubs are located. I was very lucky and I got to see a Samba concert by a great singer at the Carioca da Gemma, which was amazing! This man sang for two hours straight without taking a break thanks to his huge chest, and the band didn’t stop playing either. The cariocas dance the Samba steps so gracefully and I can imagine they would look funny and quite awkward if any northern European were to try them out!
On another night we went to the Rio Scenarium, another great bar for music and especially Samba. An antique dealer transformed three floors of this old mansion into a huge space for music and art performances. It felt like I was in a museum full of live exhibitions… 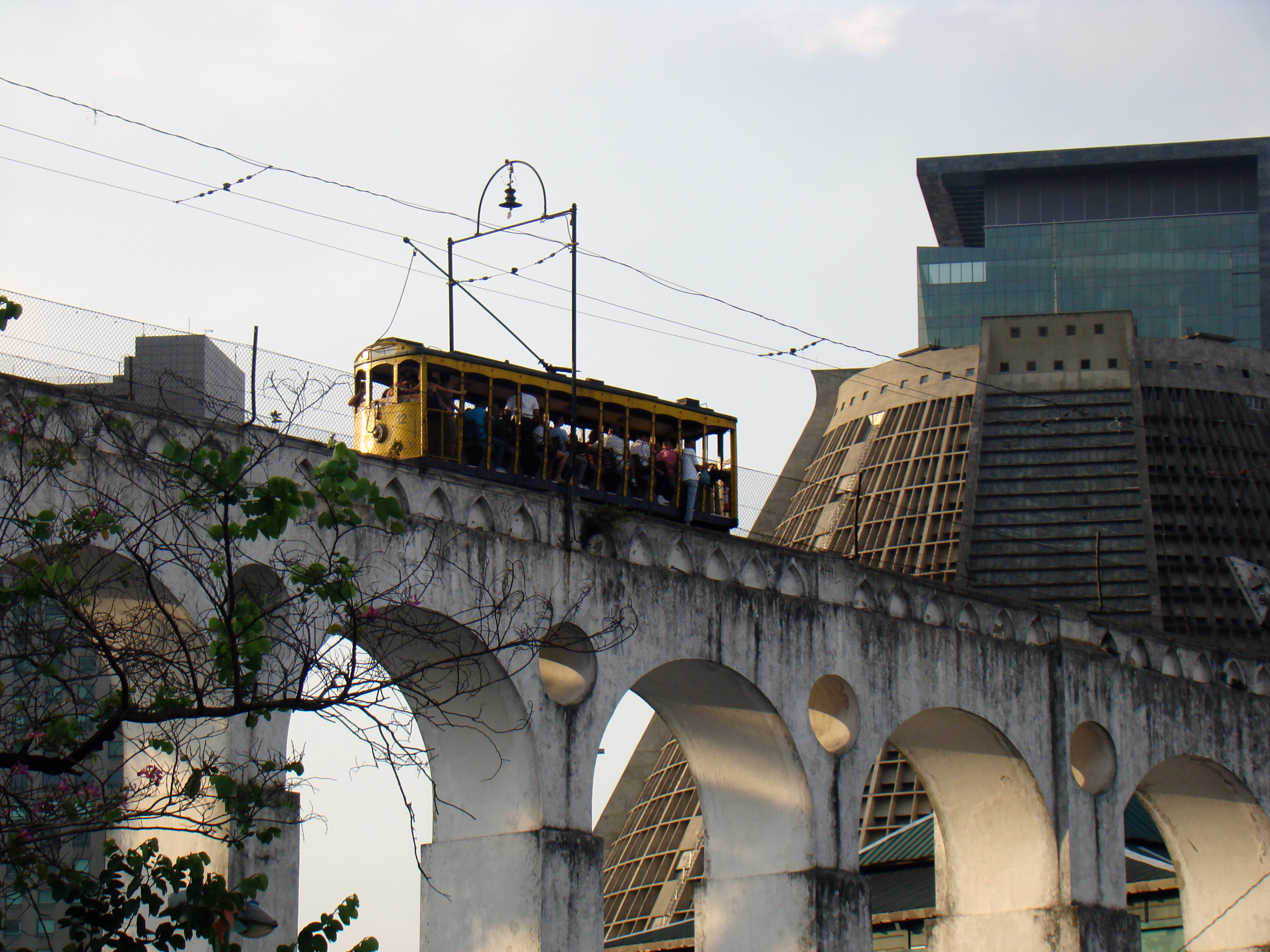 One day I wandered through the old Centro of Rio de Janeiro which has a long history and houses the imperial residence of the former Portuguese governors of Brazil. Today this area is a mix of impressive old buildings which need restoring, and huge office buildings where Rio’s salaried employees go about their everyday business. Just next to the very modern metropolitan cathedral which hosts the Brazilian Archbishop, the historic Santa Teresa tram, known locally as the bonde, goes up to Rio de Janeiro’s bohemian and artist quarter which overlooks the city.
The tram ride was a wonderful experience and only cost 60 centavos! A tram driver and a signalman drove a bunch of tourists, schoolchildren, and locals up the hills past the favelas, Rio’s shanty towns. If you’re ever in Rio, I highly recommend this little trip. 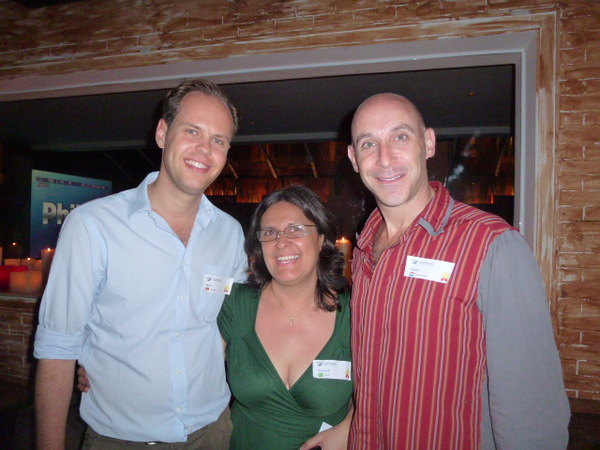 Together with the InterNations Rio Ambassadors Fernanda Carvalho and Ruben Weishut, I was able to welcome around 90 members from all around the world to the May Rio de Janeiro InterNations Event at the fashionable São Vicente Restaurant just by the lagoa in Ipanema. Fernanda who is a Brazilian language teacher has been organizing the events in Rio for two years now. Unfortunately this event will have been her last as an Ambassador as she has to quit due to personal reasons.
Everyone was sad to see her off. Her great heart and wonderful smile brought warmth and companionship into the InterNations Rio Events. Her Co-Ambassador Ruben, from the Netherlands, has been living in Rio for two years now after having established his own company in Brazil. The company supports European and North American companies doing, or aiming to do, business in Brazil. The focus of their mission is to make sure business goes smoothly.
When thanking Fernanda and Ruben for their engagement in a short speech, I also put out the question of who would be interested in stepping into Fernanda’s footsteps – there were some interested parties! 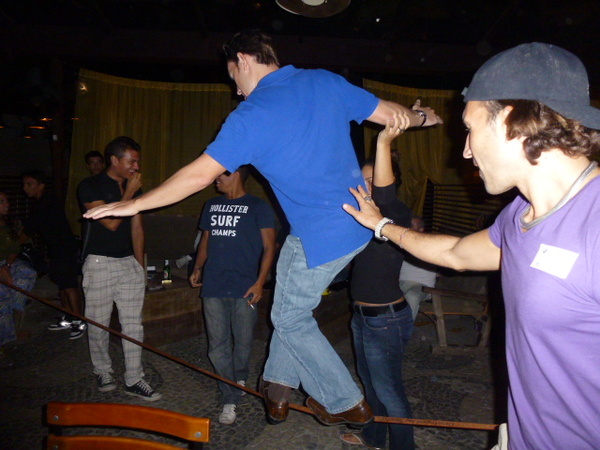 As it got late, many members listened to the live band on the patio of the restaurant and some even tested their balancing skills on our tightrope which was spanned outside. This is a truly artistic city and the InterNations Community members have been following close behind!