As Margaret noticed the last time she was logged in on InterNations, she received a notification for an upcoming event in her local community.

Suddenly, the “My Events” section of her Personal Navigator box on the Start Page informed her that she had been invited to two upcoming events via InterNations: the official InterNations Get-Together in August and a special event at the famous Oktoberfest. Since she’ll probably head back to the States in mid-September for her Mom’s 60th birthday, Margaret will have to pass on the Munich beer festival this year, but she’d really like to meet some other expats from InterNations in person and do some real-life networking as well. She’s still looking for a language exchange partner and ESL students, and she’s also thinking about joining a jogging group or finding someone to work out with at the gym.

The Munich August Beach Party looks pretty cool, Margaret thinks: It’s for “socializing and networking”, the event description says, but also “for dancing and partying” later on – just the thing she is searching for, more casual rather than formal and business-like. 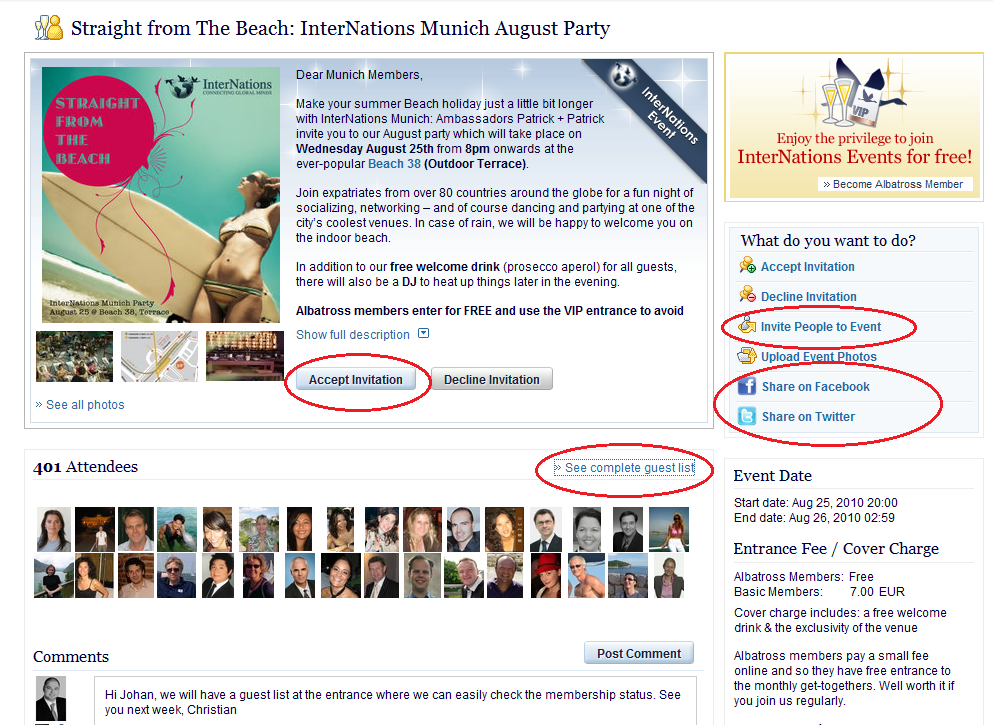 Since there are already 401 attendees (from 59 nations, the detailed list she discovers after clicking on the >>See complete guest list link tells her), she’s sure to find someone who’s either in need of an English teacher or a sports partner.

Maybe she’ll even try to buy this Albatross Membership – a premium membership status, she rightly assumes – because Albatross Members will have an extra entrance without waiting in a queue and will get in for free. But there are still a few days left for her to consider this decision. After all, the Albatross status will only get checked at the door, and everyone seems to get a free welcome drink anyway.

Albatross or not, Margaret has decided that she wants to join the event and get to know other expats. The comment section tells her that she won’t be the only newcomer at the get-together: Miyuki from Brazil and Andrea from Italy mention that it’ll be their first time too and that they’re looking forward to getting acquainted with great new people.

Without further hesitation, Margaret makes up her mind and clicks the “Accept Invitation” button right next to the photos. She’ll probably share it with her local contacts on Twitter and Facebook later. And via the >>Invite People to Event feature, she can e-mail her closest friends in Munich directly.

Now when exactly does the event begin? Next Thursday on 19:30? Or was it 20:00? And where was the venue again? In the right-hand column with the start date and the address information (boy, is she grateful for the little Google map as she doesn’t quite manage to get her bearings in Munich yet)

Margaret also spots that the Munich Ambassadors are hosting this event. So, time to check out the Ambassadors Page via the Members tab in the upper navigation bar! Two fellow Americans, she notices with delight – she now has the opportunity for a brief meet’n’greet next week! 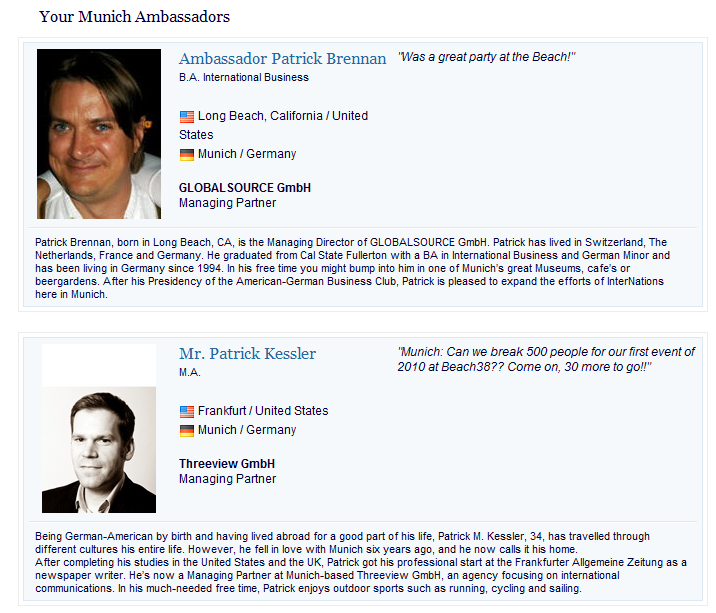