In July, I made a trip to the city of Bonn, where I grew up, in order to attend the 20th anniversary of my high school reunion. Aside from finally seeing some of my old classmates again and having the chance to visit the local InterNations Community, it was a perfect occasion to rediscover some of my favorite sights in and around this city so close to my heart.

Get Up Close and Personal with a Musical Genius

Da-da-da-DUM! In December 1770, the child prodigy Beethoven was born in a house in the center of Bonn. Today this building has become a symbol of the city. If you are a classical music enthusiast (or a local high school student dragged there by their music teacher), Beethoven’s birthplace is a must-see. Now home to memorabilia such as historical instruments and original manuscripts, it holds the most extensive Beethoven collection in the world and offers a brilliant insight into the composer’s life. 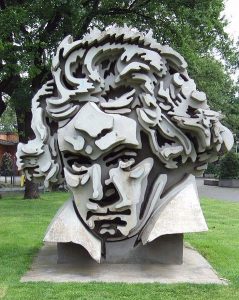 Beethoven himself gave his seal of approval for the city after he had moved to Vienna: “I will always remember my time in Bonn as one of the happiest periods of my life.” And the city, in return, shows him the respect he and his legacy deserve. Around the city, you will spot various things marking his presence from monuments, to the Beethoven Orchestra — and even Beethoven wine.

In fact, Bonn’s citizens even donated money for the construction of the Beethovenhalle, inaugurated in 1959. The city also hosts the yearly Beethovenfest. In some form, this festival in honor of the composer has taken place on and off since 1845, the year of Beethoven’s 75th birthday. It is now regularly scheduled for September with a variety of performances throughout the month. If you are planning to visit the city next month, you should try to make it to at least one of the concerts, with top artists coming from around the world.

Ascend the Stairway to History

The Old Town Hall, completed in 1780, has stood witness to a large swathe of Bonn’s local history. Located in the Marktplatz (the town’s market square), the building is adorned with a rococo façade and is currently home to the Lord Mayor’s office and representation rooms. 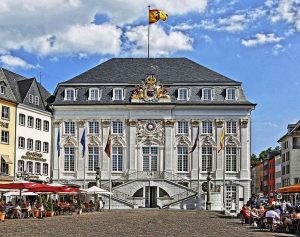 When Bonn was the capital of the Federal Republic of Germany, between 1949 and 1990, the Old Town Hall hosted a variety of politically important guests, who all signed their named in the Golden Book of the City’s Guests of Honor upon arrival. Just some of these guests, and some of the figures to give speeches on the Freitreppe — the so-called steps of history — were John F. Kennedy and Queen Elizabeth II. Take the time to walk in their footsteps, take a photo before those gilded steps and feel a part of history.

Explore the Place Where Nature and Knowledge Meet

It may sound odd to recommend a university campus as a site worth seeing on your trip to Bonn, but this particular university is steeped in history. The University of Bonn (its full name’s quite a mouthful: Rhenian Friedrich-Wilhelm University of Bonn) has been considered one of Germany’s most important academic institutions since the 19th century. 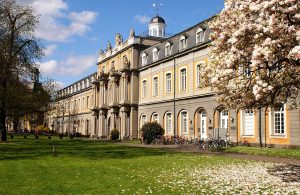 Its main building has an interesting history of its own. The Electoral Palace is a Baroque-style residence which originally housed the Archbishop of Cologne, then becoming the home of the Faculty of Arts as early as 1818. Here, you won’t only able to take in the magnificent campus building, but also get to see the place that both Karl Marx and Friedrich Nietzsche graduated from.

But if you prefer plants to philosophy, just visit the Poppelsdorf Palace (another residence turned university building) and the nearby Botanical Garden instead. If you like being surrounded by nature, you will surely enjoy exploring the gardens as well as the palace courtyard, which offers impressive views of the Seven Mountains southeast of the city.

After living in St Gallen, Switzerland and moving to Munich, I must admit that the so-called “Seven Mountains” near Bonn are more like a range of hills. However, even if they aren’t quite as majestic as the Alps, the Seven Mountains are still a popular destination for daytrips from the former capital, for hikers, families, and nature enthusiasts alike. I fondly remember numerous family outings as a kid. 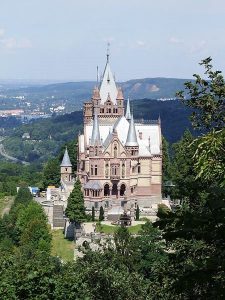 It’s a very idyllic area, and on a sunny day, the scenery looks like an illustration from an old-time fairy tale or a vintage postcard collection with pictures of “romantic Germany”. Hikers with lots of free time could theoretically follow all 350 km of the Rheinsteig along the river, from Bonn to Wiesbaden, and cross the Seven Mountains along the way. Realistically speaking, just take the afternoon off to see Schloss Drachenburg (Dragonstone Castle) — not an actual castle, but a fake one built as a gothic mansion for a 19th-century financier, but lots of fun to explore nonetheless. Children will love it!

Or, if you like your travels to be really relaxed, take one of the riverboats on the Rhine and admire the hills and castles (both fake and authentic ones) from below while sipping a cup of hot chocolate or a pint of cool beeronboard.

This museum — one of the most popular in Germany and another perennial favorites among school teachers organizing local field trips — is dedicated to contemporary German history, with a permanent exhibit detailing the history of Germany from the end of the Second World War right up to the present day. It also houses a wide range of temporary exhibitions focusing on selected aspects of recent German history.

After soaking up all you need to know about Germany’s history in the 20th and 21st centuries, you can follow the “Path of Democracy” through the Federal Quarter, beginning right at the museum. This walk, which lasts approximately 90 minutes to two hours, is made up of signs along the way, which provide information about the past and present functions of the relevant spots in the Federal District. Along the way, you will see are the former Bundestag (parliamentary building), which has now been turned into the UN Campus, and the former office building of the Members of Parliament.

And after so much serious history and politics, Bonn should offer enough cafés for a traditional German Kaffee and Kuchen (a cup of coffee and a piece of cake) or winehouses for the famous local vintages from the Rhine Valley. Prost!