InterNations Founder & Co-CEO Malte Zeeck provides a detailed portrait of our expat community in Manama, Bahrain, and the local event he attended recently.

To attend the spring event in Manama, Bahrain, I had to go on a lengthy journey: my trip from Munich to Manama, via Frankfurt and Dammam, took me about eleven hours. The time difference of another two hours on top meant that I started out at 10:00 and arrived at 23:00. Fortunately, the plane was half-empty, so I could first relax during the flight and then get in a good night’s sleep at the hotel. 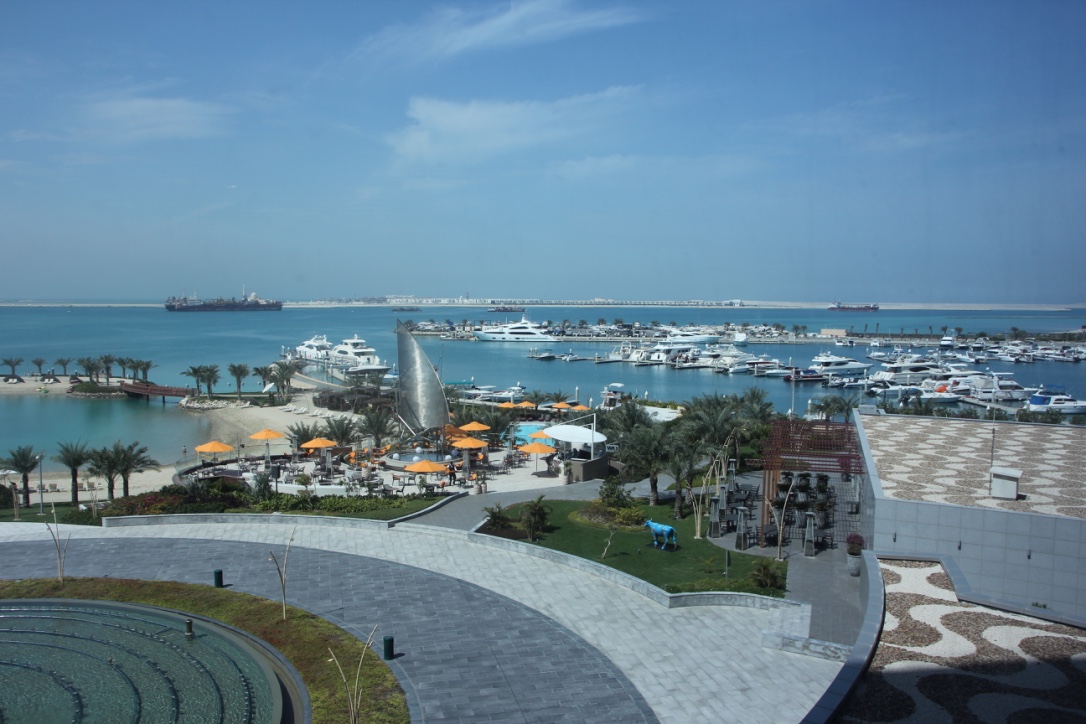 I was staying at the ART Rotana on Amwaj Island, a neighborhood fully reclaimed from the sea, like so many areas in tiny Bahrain. The InterNations Official Event was to take place at the ART’s Asian restaurant and bar the following evening, so I had plenty of time to arrange several meet-ups during the day.

First, I finally got to know Burak, one of our InterNations Manama Ambassadors, in person. The Turkish expat was already an active member of our community when he still used to live in Moscow, about six years ago. In 2010, when he moved to Bahrain to enjoy a much warmer climate, he immediately checked out the InterNations Community there.

Back then, we only had around 400 members in Bahrain and the get-togethers were also smallish affairs. As we happened to be looking for a new Manama Ambassador at the time, he decided to accept a new challenge. Thanks to working for Ogilvy, one of the world’s largest advertising agencies, Burak clearly has lots of experience in spreading the word. 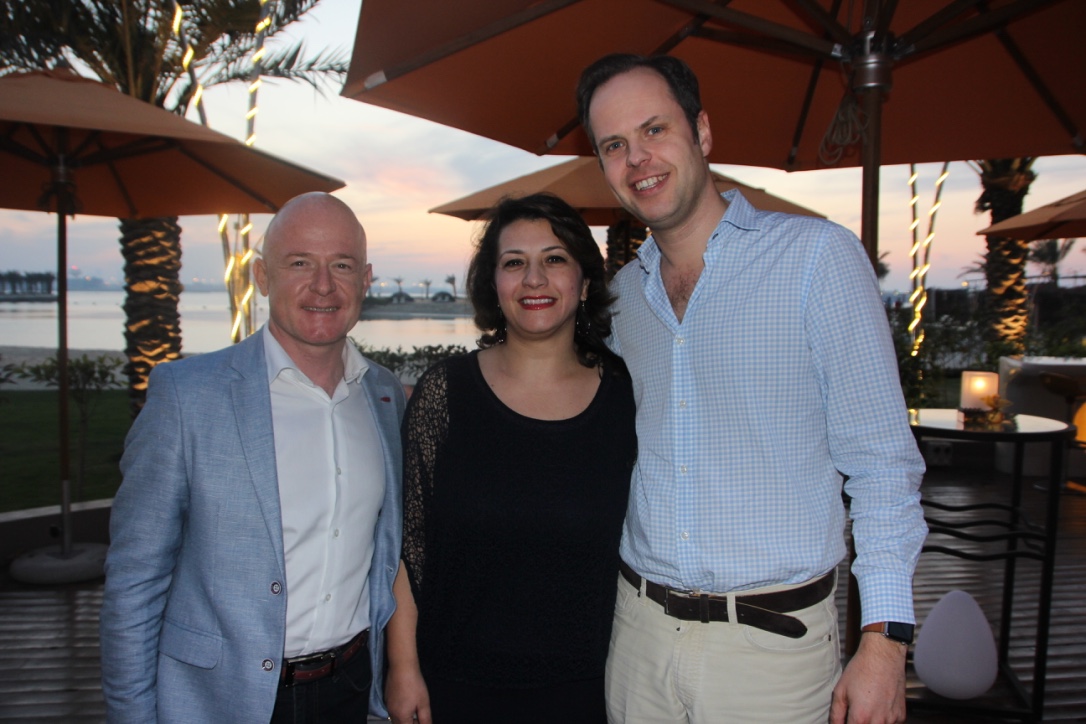 Today, there are over 7,500 InterNations members in Bahrain, and it’s generally a very active community with 20 InterNations groups as well. As most of the over 300,000 residents living in Bahrain’s capital are expats, Burak — a very entrepreneurial personality — still sees a huge untapped potential for our InterNations Community.

But, even more importantly, he also told me how the role of an InterNations Ambassador has had a positive impact on his own life. Burak has met several close friends through our network and gained valuable business contacts that even led to joint projects. Seeing how our community can directly change people’s lives for the better is the best feedback we as founders could get!

A High-End Club High above the City

For 10:30, Burak had kindly arranged the first of my press interviews in Bahrain: Gulf Daily News sent a reporter who’s an expat herself, and we extensively discussed InterNations in general, the development of the Manama Community, and particularly the InterNations Volunteer Program.

Afterwards, Burak took me on a tour of Manama, telling me all about the capital and its local community during our sightseeing trip. 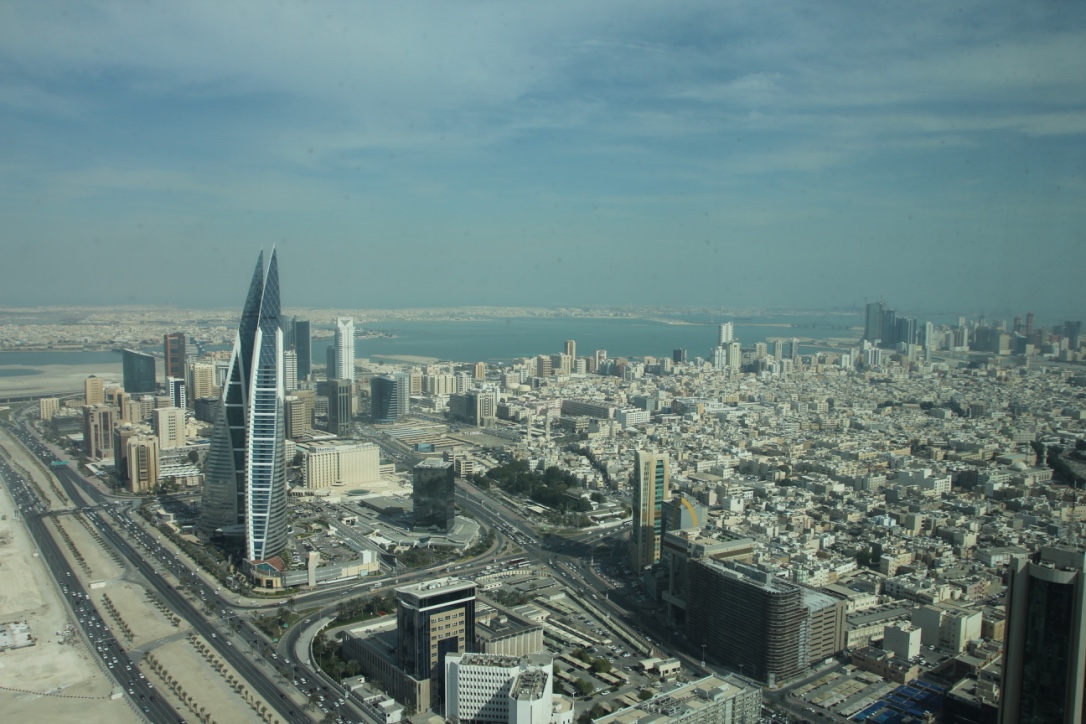 He showed me the great views of the city and the Persian Gulf from the panorama windows of the Capital Club, one of Bahrain’s premier business and social clubs, located on the top floor of a skyscraper in the Financial Harbour district.

The high-end club would also make a great venue for future events, Burak suggested before proceeding to introduce me to its general manager, too. The latter was a Lebanese expat, who told me that both her daughters — living in two completely different cities around the globe — had made good friends and even met their husbands through InterNations. It’s a very small world indeed!

A Passionate Advocate for Expatriates

The next stop after the ultra-modern buildings of the BFH neighborhood was an older part of town, full of little shops and restaurants, which had more of a typically Middle Eastern vibe. We’d chosen one of the cozy restaurants, a French-Lebanese place, to have lunch with Hanan, Burak’s fellow Manama Ambassador.

An expat from Amman, Jordan, Hanan came to Bahrain about three years ago to pursue an interesting job opportunity in the logistics sector. 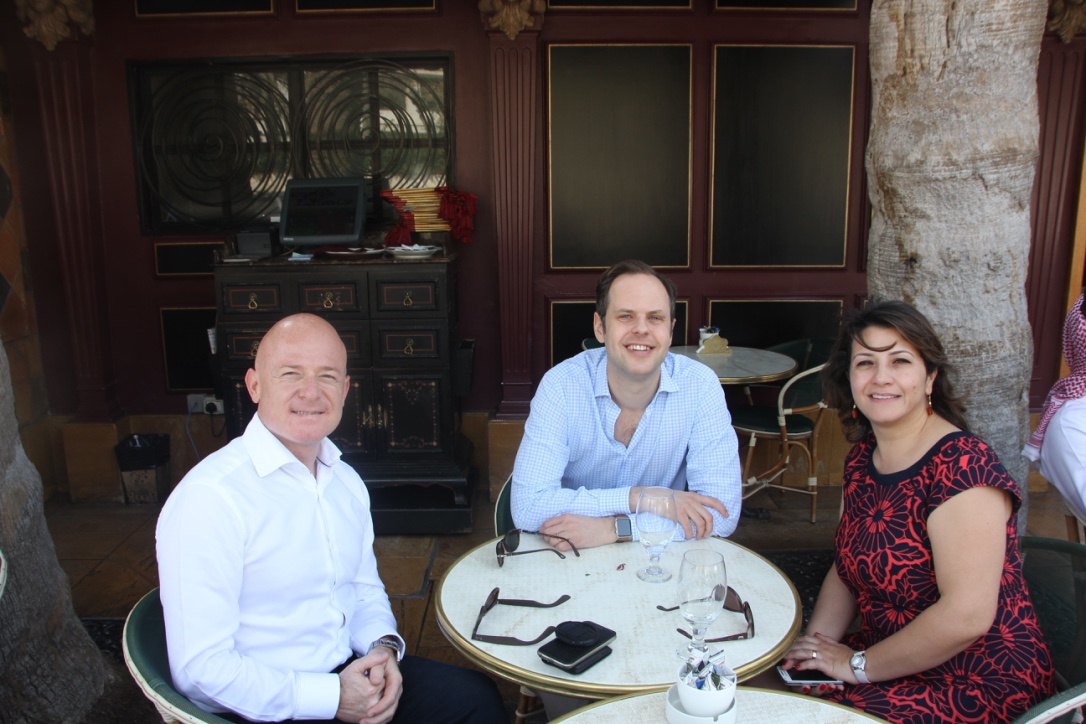 At one of the local events, she met Burak and was fascinated by the concept of the InterNations Ambassador role. When the growing community became a bit too much for one person to handle, she stepped up to join the Manama Community Team.

Just like Burak, Hanan is a passionate advocate of our mission to make life easier for expats, devoting a lot of time to her position, but she also explained how she’s benefitted from InterNations herself. Getting involved in the community meant that she found new friends in an unknown city, took advantage of a new job offer from a German company, and — last but certainly not least — met her South African husband through our network.

A Wide Range of Press Coverage

In the afternoon, there was another interview plus photo shoot coming up. On the outdoor patio of Trader Vic’s, the restaurant and lounge of the Ritz-Carlton, a journalist from Ohlala Magazine was waiting for us. Ohlalala is the Vogue of the Middle East, focusing on fashion and lifestyle topics for a female audience from the region. Therefore, my interview partner was especially interested in women in the InterNations Community — Burak could tell her all about our Women Only Group and several women organizing successful activities for various InterNations Groups in Bahrain. 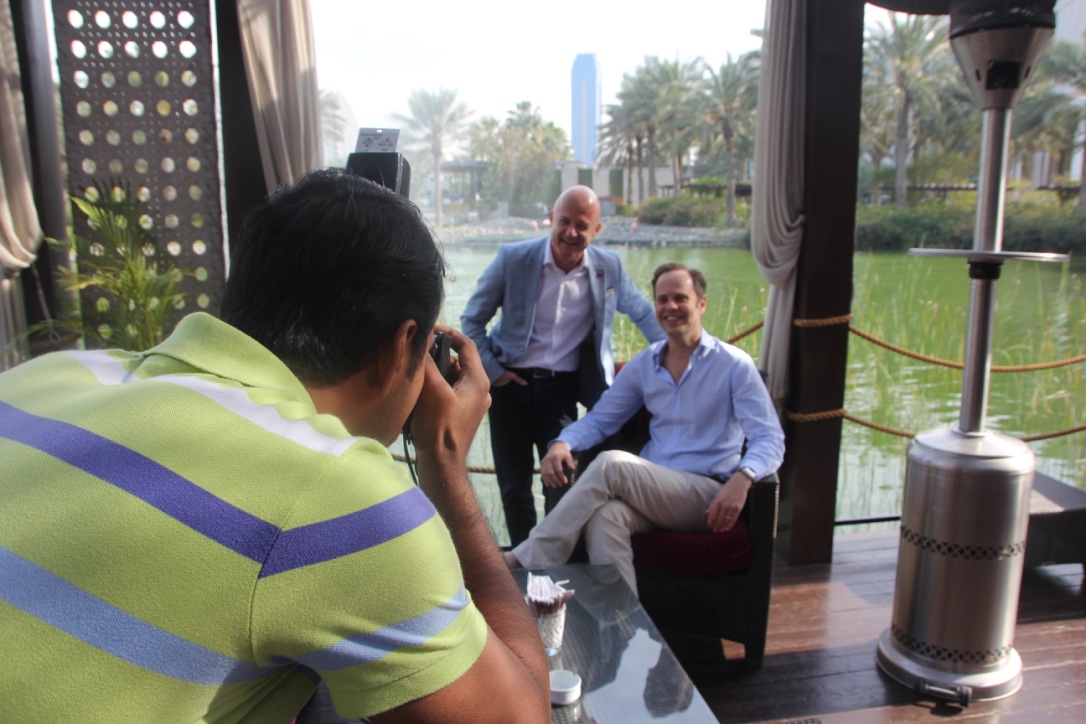 A little later, it was already time to return to the ART Rotana hotel and get ready for the event. Before the get-together officially started, I met up with Burak and Hanan to grab a bite to eat and give two more interviews — one of Bahrain Confidential, an English-language lifestyle magazine, and the other for Gulf Insider, a Bahrain-based publication covering business, finance, and current events, as well as travel, art, and lifestyle round the Persian Gulf.

Another big thank you to Burak, who’s really well connected in Bahrain and organized quite a lot of press coverage for my first visit!

A Fun Event with a Familial Ambience

The event itself took place at the WU bar, an Asian fusion lounge featuring an outdoor terrace with great beachside views, with the balmy 25°C being a nice change from the cool and even snowy spring weather in Munich. 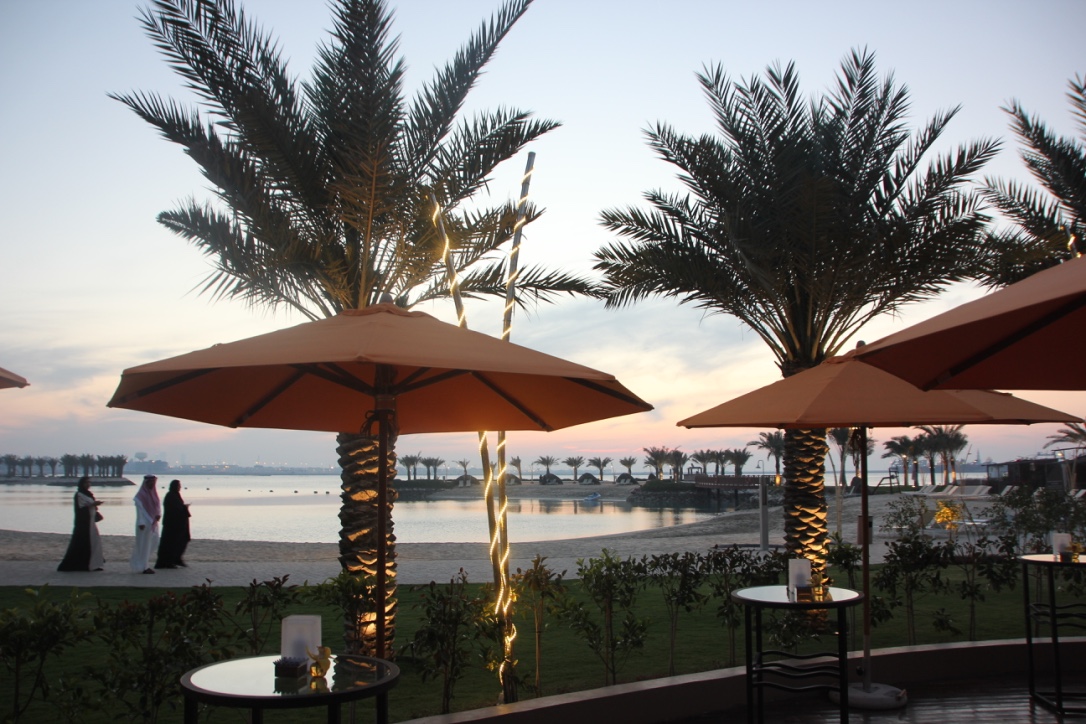 Over 200 attendees from more than 50 countries came to enjoy the familial atmosphere — expats from Germany, the US, Spain, the UK, Kenya, South Africa, and even some regulars from Dammam, Kobhar, and other Saudi Arabian cities. They often spend their weekends in Manama to experience a richer social life than the restrictions faced by expats in Saudi Arabia will allow.

In a short speech, I got to thank the InterNations Ambassador Team officially for all their commitment and energy, and some of the Group Consuls — like Rebecca and Kevin, who are in the charge of the Manama Board Games Group — had the opportunity to present their activities. I also made a call for action for more InterNations members to get involved and share their passion and interests with other people in the community.

In the course of the evening, plenty of guests approached me with feedback on our official events and activities, as well as on the InterNations website. Everyone was really excited to hear that the first version of an InterNations native app would be coming soon! 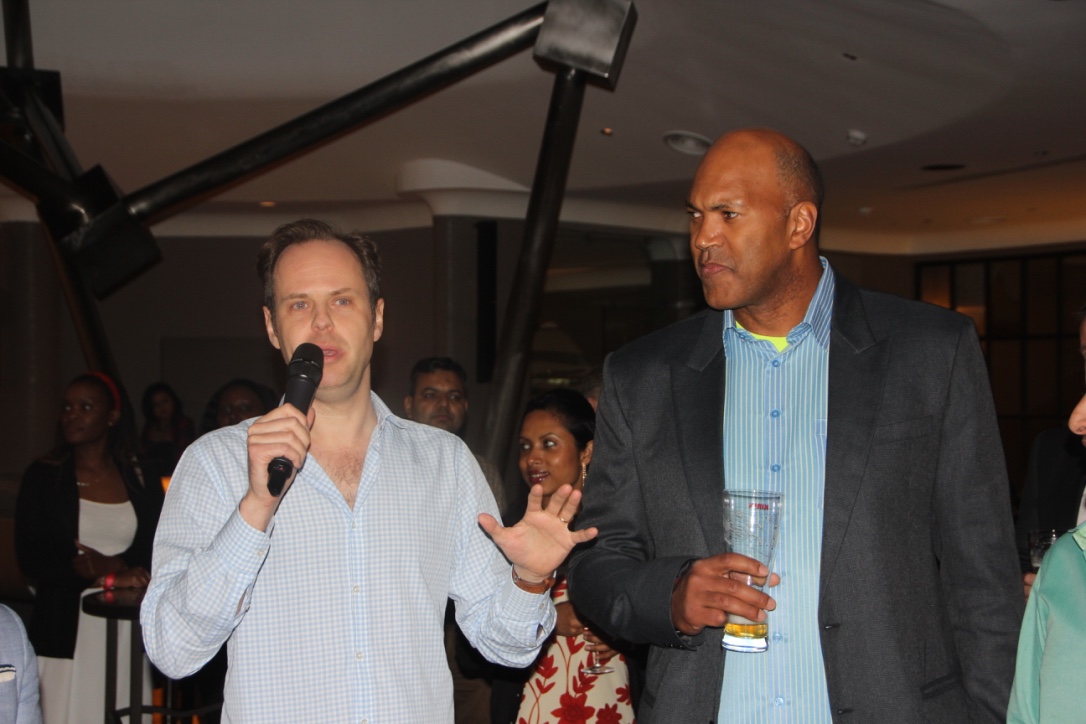 Later that night, a few of the members decided to continue the lively event unofficially next door, at the Cellar 59, a popular wine and tapas bar with its own DJ that doesn’t close before 2:00 in the morning. Though I really enjoyed the entire day, I basically dropped into bed and slept like a log as soon as I got back to my hotel room.

Fortunately, the car supposed to pick me up and bring me to the airport was only scheduled for noon. Next stop: Doha, Qatar!