Malte Zeeck, InterNations Founder & Co-CEO, talks about the things to see and do that you shouldn’t miss out on your next trip to Dublin.

This was actually the first time ever I’d travelled to Dublin, though the Irish capital is less than two hours by plane from Germany. I’d always had a very positive image of Ireland and the Irish, though, associating them with the hospitality of Irish pubs and an easy-going, friendly attitude. In that respect, I certainly wasn’t disappointed during my brief stint in Dublin.

The Water of Life

Ireland and whiskey is a somewhat stereotypical pair that goes together as well as Ireland and Guinness. In spite of the touristy touch, a guided tour of either the Old Jameson Distillery or the Guinness Storehouse is a must for all visitors to Dublin — even for teetotalers. 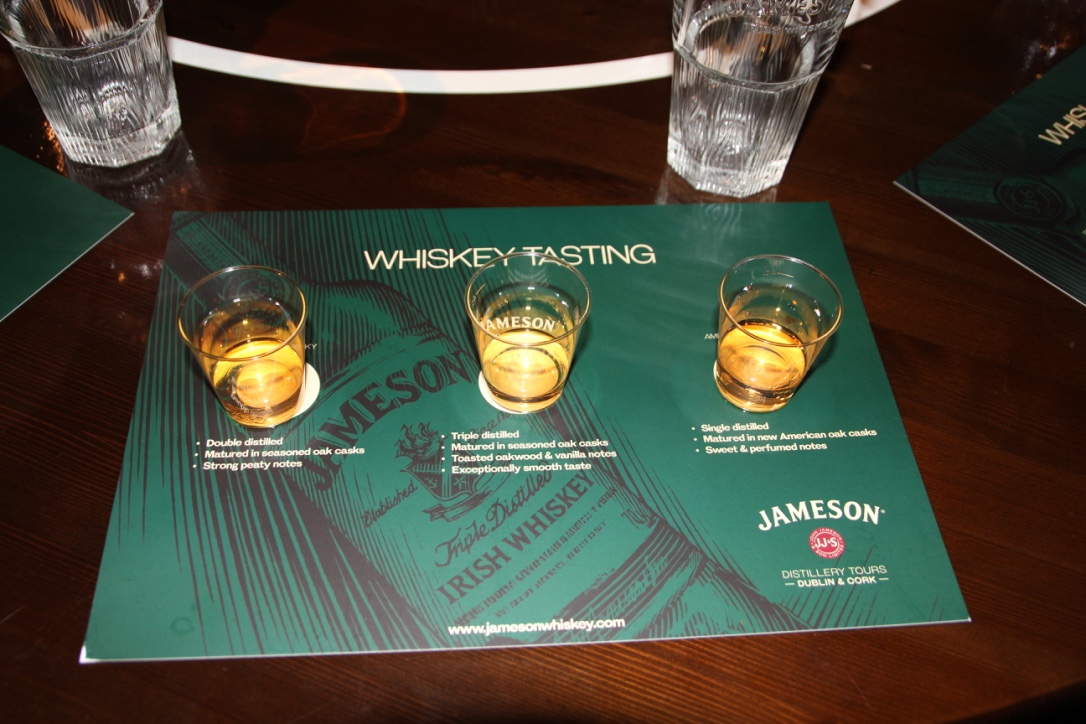 I opted for the distillery since I didn’t want to betray my attachment to the breweries in Munich, my adopted home. Though the building in Bow Street is a visitors center rather than an operating distillery (today, Jameson Irish Whiskey is produced in County Cork — and owned by French-based conglomerate Pernot Ricard), I got some interesting glimpses into whiskey-making and its importance for the Irish economy.

During the final tasting round, we were served an Irish whiskey, a Scottish whisky (the one without the ‘e’) and an American brand. I now have an “Irish Whiskey Taster” certificate to hang above my desk. Sláinte!

The Head of Brass

The time for a glass of Guinness came a little later: when in Ireland, do as the Irish do! This means that a visit to the nearest pub is mandatory. Thus, I grabbed a bite (and a pint) at the Brazen Head in Lower Bridge Street, about halfway from both medieval Christ Church Cathedral and the quays of the River Liffey. 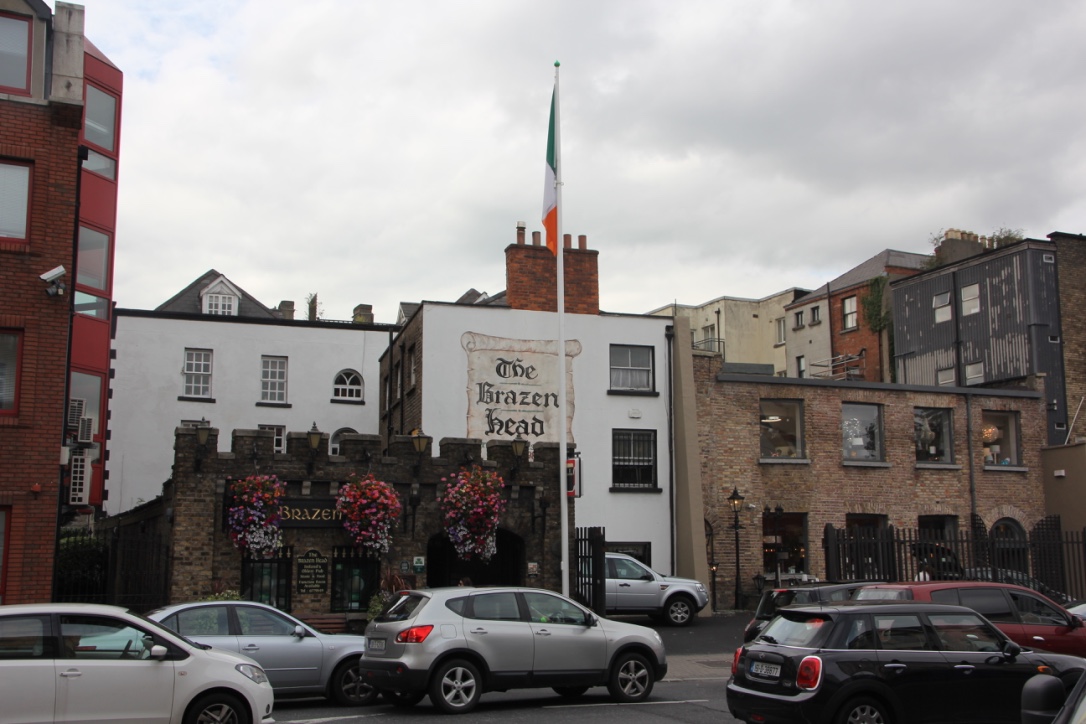 The Brazen Head claims to be Ireland’s oldest pub and is therefore a major tourist attraction. It serves a nice traditional Irish stew, as I discovered, and they offer a folksy live music session each night as well.

For the more literary-minded amongst you — it is briefly mentioned in chapter 16 of James Joyce’s Ulysses. The book probably starts making more sense, too, after a few pints.

The Book of Kells

Lest you start thinking that Dublin is all about the drinking: if there is one cultural landmark you shouldn’t miss out on, it’s Trinity College, the oldest university in Ireland and one of the oldest in the British Isles. The main college grounds cover an extensive area in the city center, and they have the same quaint and peaceful atmosphere as the Oxbridge colleges upon which they were modelled. 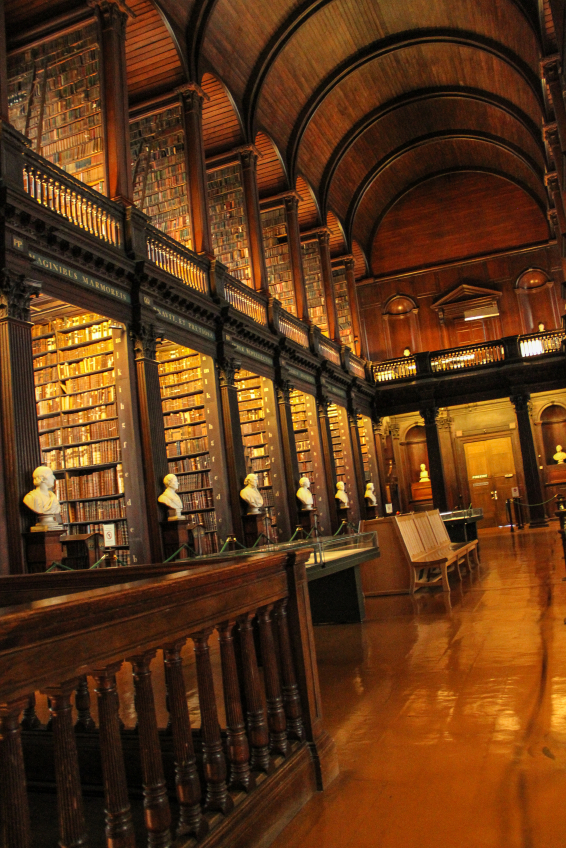 After looking at the list of alumni, you get the impression that nearly every Irish person of distinction attended Trinity College, including Oscar Wilde, Chris de Burgh, and the CEO of Ryanair. My personal favorite is Bishop James Ussher, though – a 17th-century clergyman and scholar who went down in history for trying to establish the date of the Creation. In case you’re wondering: it all happened on the 22rd of October in 4004 BC, at around 9 pm.

Of course, a guided tour of Trinity College doesn’t only include anecdotes about their colorful alumni: the highlight is the famous Trinity College Library. Its venerable Long Room, an imposing hall full of wood paneling and marble busts, houses thousands of old tomes in oak cases — but the Treasury is even more impressive.

Trinity’s treasury displays the Book of Kells, one of the world’s most beautiful medieval manuscripts and Ireland’s most important national treasure. It’s so famous it even has its own iTunes app for bibliophiles!

The Harbor of Howth

Even Ireland is known to enjoy grand summer weather on occasion. Hey, the average temperature in August is a scorching 19°C! On a clear and dry day, just hop onto the next DART north and don’t get off the train before the terminal in Howth.

Once a fishing village on the shores of Dublin Bay, Howth is now a bustling suburb and a popular destination for cyclists, runners, hikers, and anglers. The peninsula is the perfect place for a stroll along the pier, and there’s a local market, as well as a lighthouse, close to the train station. 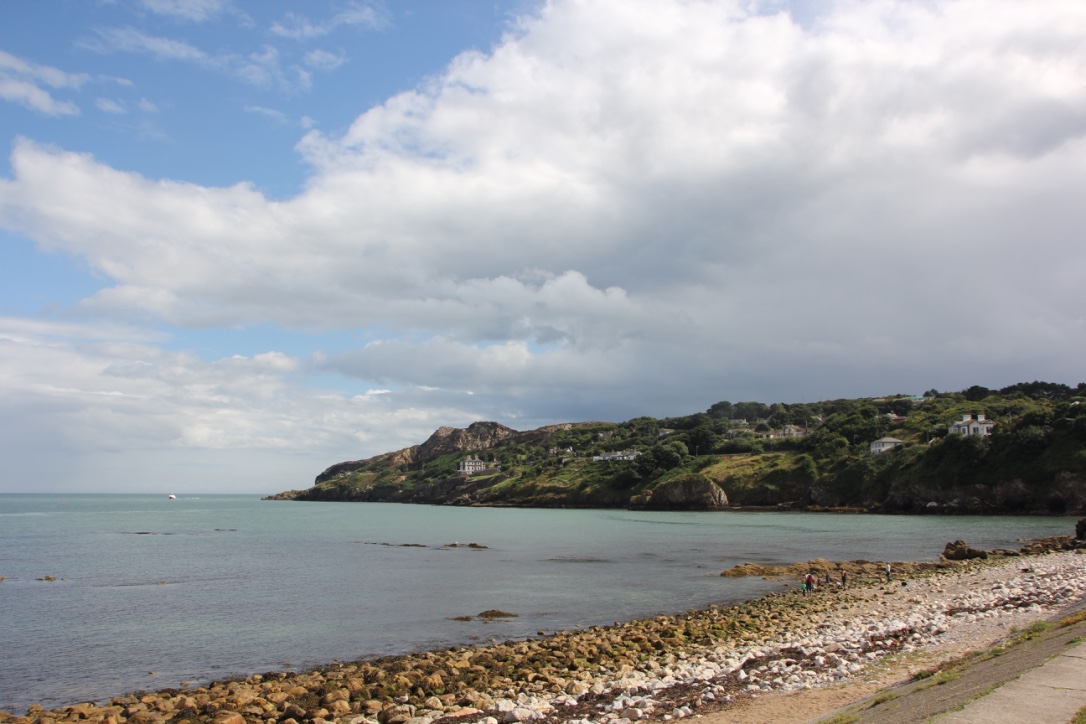 Unsurprisingly, there’s quite a few seafood restaurants in the area, especially near Claremont Beach and the West Pier. Howth Harbour still features an active fishing industry rather than only recreational beaches.

Speaking of beaches: if you’re really, really brave, you could take a swim. From what I heard, there’s even an annual race from the tiny island called Ireland’s Eye back to Howth Harbour.

I must admit that I didn’t dare dip my toes into the water: even the Baltic Sea, where I was born and which isn’t exactly known for being a tropical paradise, is warmer by an average three degrees than the Irish Sea. As the inhabitants of Howth are said to be descended from Celts and Vikings, they’re probably tough as nails, though.

The Sports of Ireland

You also have to be tough as nails if you want to become a rugby player, I suppose — especially for rugby league, the hardest contact sport in the world. Actually, it took me a while to figure out that there’s two kinds of rugby in Ireland, rubgy league and rugby union, and that most folks simply talk about “league” and “union” instead.

Please excuse my ignorance — neither sort of rugby is anything but a minor sport in Germany, where football (the “soccer” variety, not American football, of course) is the general favorite. To add to my confusion, when you hear “football” in Ireland, it might refer to, well, what I define as football, or to Gaelic football, which is actually more popular in Ireland than football-football. 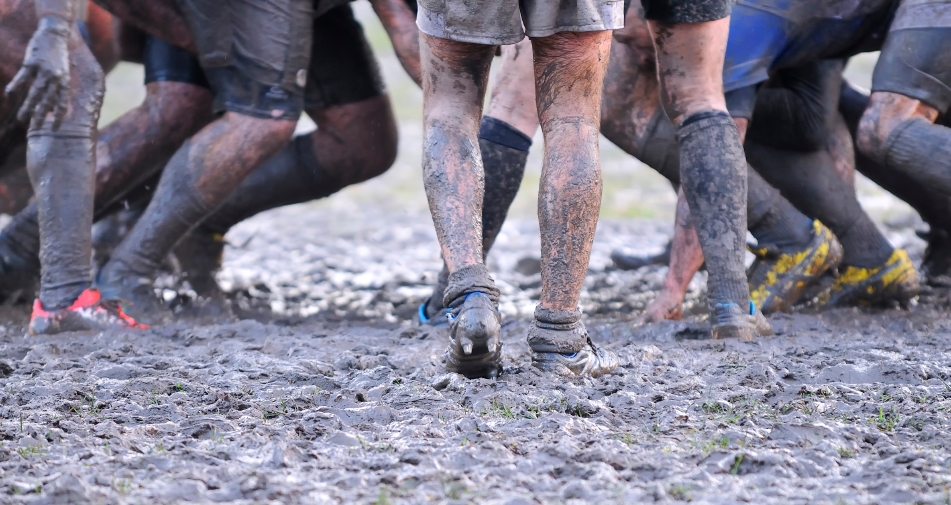 Perfectly obvious, to be sure.

Anyway, the brand-new Aviva Stadium is one of Dublin’s more recent sights. It serves as home base for both the national team of the Irish Rugby Union and the Football Association of Ireland.

If there’s no match on — neither of the rugby nor the football variety — you can just take a guided tour of the stadium instead. Unfortunately, there were two important matches when I was in town, so I didn’t have the chance to visit it myself. But every pub in Dublin broadcast the games, so I caught at least a glimpse of the arena.

The stadium also used as a concert arena for 50,000 spectators. So, if you prefer Rihanna or AC/DC to the Shamrock or the Boys in Green, see if there’s an international star on tour.