Before Easter, I was about to enjoy my first spring cocktails – not here in Munich, as it turned out, but at one of the March events hosted by the InterNations Community in Athens. I even got to stay in the city a little longer than planned: 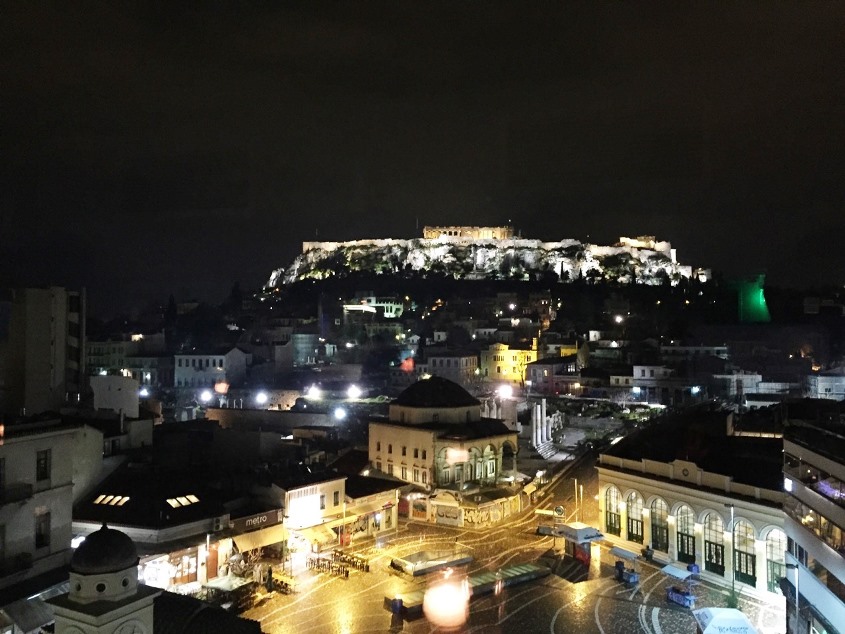 due to a strike, Lufthansa cancelled my flight on Friday, rebooking me to a machine on Thursday night.

I thus had to leave the InterNations office in a hurry on Thursday afternoon to go home and grab a few clothes before rushing off to the airport. Despite that slightly stressful start, the flight itself was a smooth two and a half hours to Athens – fortunately, well before an awful hurricane hit Germany, and with a sudden upgrade to business class in the bargain.

Greece and Germany: A Fraught Relationship

I arrived in Athens right in the middle of a politically sensitive situation, as far as relations between Greece and Germany are concerned: owing to Germany’s fiscal policies in the Eurozone crisis, the relationship is indeed rather strained right now.

This actually led to a vaguely surreal conversation with the taxi driver who picked me up at the airport. As he found out I was from Germany and I wanted to go to the Hotel Grande Bretagne (an upscale location next to the parliament building on Syntagma Square), I had to convince him I wasn’t working for the Troika and had nothing to do with the EU, IMF, or ECB. 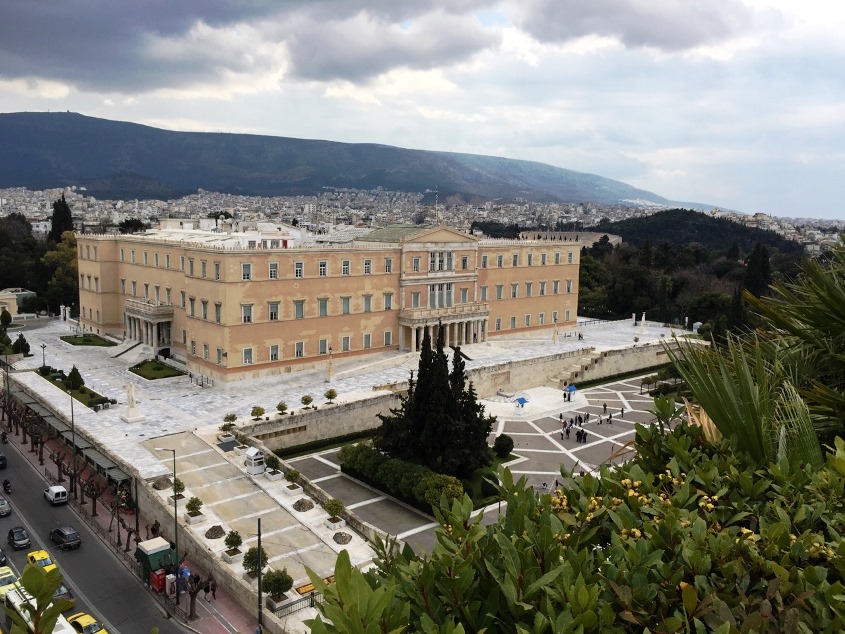 Obviously, I hadn’t chosen the hotel because of its proximity to the center of Greek politics, but because it was the designated event venue for Friday’s get-together.

However, I did get an upgrade to a very comfy room with a nice view of the Παλαιά Ανάκτορα (Old Royal Palace), which houses the parliamentary sessions nowadays. Another special thanks for the room upgrade to Tim Ananiadis, the general manager, who also attended our event on the following night together with his wife.

A fun fact for those interested in architectural trivia: The Old Royal Palace was designed by Friedrich von Gärtner, a 19th-century Bavarian architect, who also created several famous landmarks in Munich. So, in a way, my room even overlooked a little piece of “home”.

I didn’t actually have time to enjoy the splendid view, though.

After I’d dropped my baggage, Anastasios, our new InterNations Ambassador in Athens, came to meet me. We took a leisurely walk down to Plaka, where we had a drink at the rooftop bar of the “A for Athens” hotel. 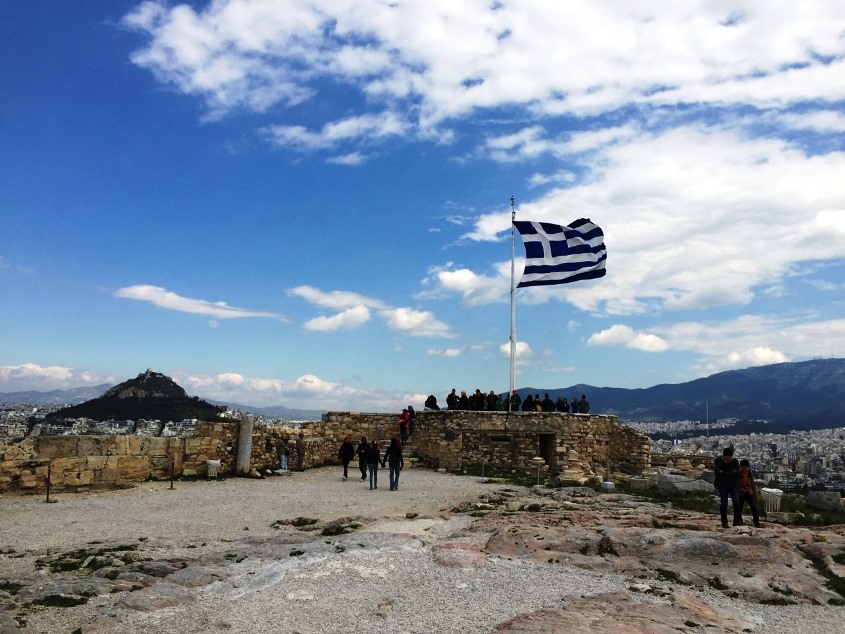 The bar provided another stunning view – this time of the brightly illuminated Akropolis – and a great atmosphere. Anastasios, who is currently working as a business advisor / consultant in Athens, told me all about his motivation for becoming an InterNations Ambassador, as well as his experience of living abroad in various European countries – from Austria over Cyprus and Malta to Poland and Spain.

On Friday morning, I kept eyeing the Akropolis from my breakfast table on the rooftop terrace of the Grande Bretagne hotel. I simply had to go and explore it again.

The first (and last) time I’d been to Athens had been in March 2008, back when I hosted our very first InterNations Event in town. Seven years ago, we had only 30 members in the entire city, and a total of three people (myself included) showed up for our kick-off meeting.

However, the prospect for this upcoming event looked completely different – thankfully, but not unexpectedly, since our Athens Community has also undergone tremendous growth: about 300 members from 33 different countries were on our latest guest list, and nearly all of them were to show up later that night. 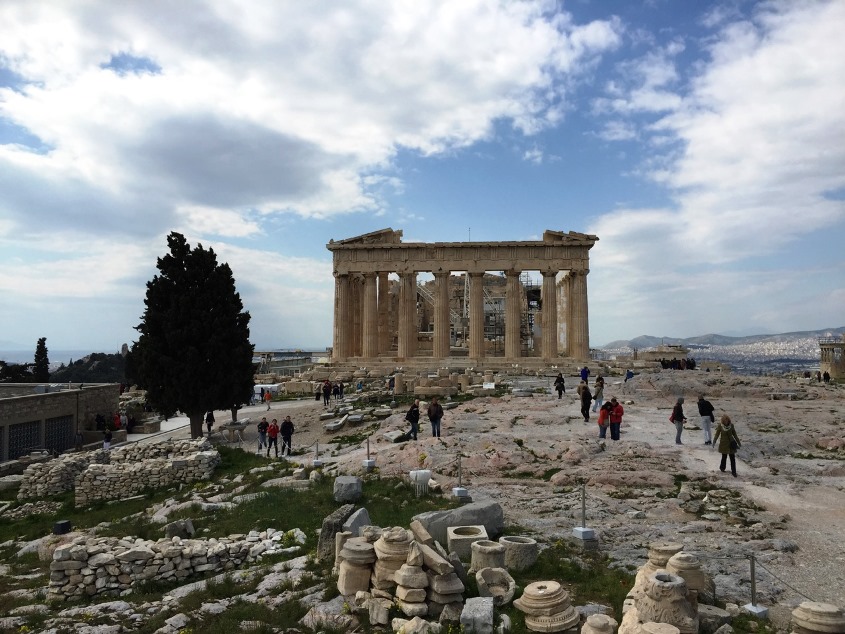 After strolling through the ancient ruins till I was getting a bit overwhelmed by all those Caryatids, Ionic columns, Doric colonnades, and more architectural trivia than I could take in, I decided to rather focus on present-day Greece’s amenities: I went down to one of the many restaurants at the foot of the hill to try some freshly grilled souvlaki.

I couldn’t indulge too much, though. Before our event started, Anastasios had booked a table at Strofi – in his opinion the best restaurant in Athens. Only recently the German Federal Chancellor and the Greek Prime Minister had taken lunch there together. One can only hope that the delicious food made their talks a little more relaxed and mellow. The sfyrida – a seafood dish of grilled White Grouper – and the local wine certainly turned my own mood from good to excellent.

At nine o’clock in the evening, the InterNations Event started in the historical ballroom of the Grande Bretagne (truly an amazing location), and the guests began to pour in. Anastasios and his volunteer “crew” of several InterNations members welcomed them all personally, and the spacious ballroom filled up surprisingly quickly.

Not only did I have interviews with several local and international media outlets (e.g. Protothema and Athens Views), but I also enjoyed the opportunity to talk to various members: for example, Fivie, who is very active in the InterNations World Forum on our website, or Nikos, an enthusiastic Group Consul, who organizes several smaller get-togethers in Athens every month.

During the official part of the evening, I had the chance to thank Anastasios, Sylvia, our former Athens Ambassador (who’d had the position for an impressive six years), and Zdenka, who acted as a short-term Ambassador last summer, for their efforts. I also raffled off two vouchers for the Grande Bretagne spa to a couple of lucky winners. 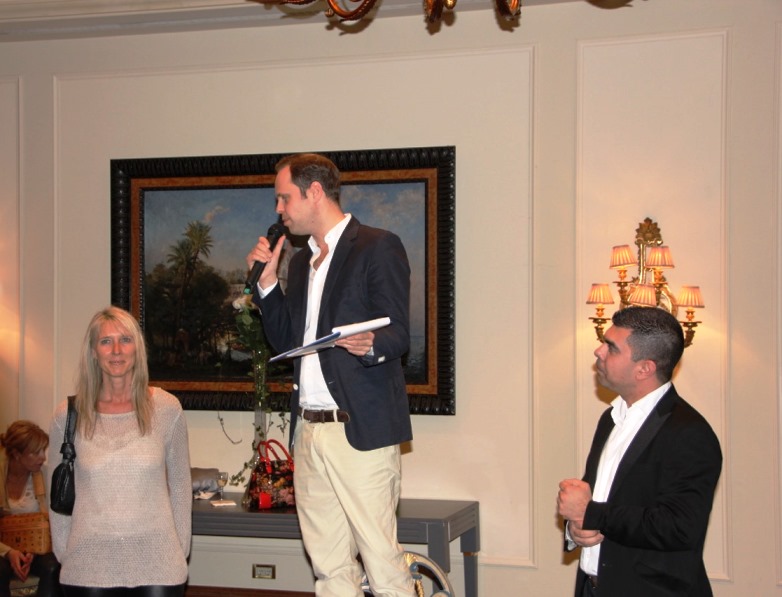 During the unofficial small talk, politics was, of course, a huge topic. I can’t remember listening to so many political discussions at any other InterNations Event. People – expats and Greeks alike – were very interested in the general opinions about Greece in Germany. At the same time, it was fascinating for me to hear what our members thought about the present situation.

Opinions were fairly divided, too: I think I heard about everything, from people advocating for more radical reforms over stances favoring Greece’s withdrawal from the Euro to voices condemning all austerity politics. Fortunately, all those heated debates stayed pretty peaceful and constructive – if only it were that easy in international politics…

We ended our event in much a less serious fashion, though – with music and dancing till about half past one, when a group of guests decided to continue the party at the close-by Kitty Cat Club, one of Athens’ most eclectic nightlife venues. We even made it to another popular venue, Rock’n’Roll Athens, which used to host a few previous InterNations Events.

After a busy day and a long night in Athens, I finally got bed at 5:30 in the morning to snatch a few hours of sleep before leaving early for Munich and home. Γεια σου, Αθήνα!