On the road again: InterNations founder and co-CEO Malte Zeeck looks back on his recent travels through China.

My latest trip brought me to China, which is well known for its large expat population.

Actually, InterNations has nine Local Communities with over 70,000 members scattered all over China, from Beijing in the north to Guangzhou and Shenzhen in the Pearl River Delta, as well as Hong Kong off the southern coast.

In just one week’s time, I’d get to visit three of China’s booming mega-cities and their respective InterNations Communities: Beijing, Shanghai, and Hong Kong.

A Hutong in Beijing

First stop: Beijing. I’d barely got off the plane after a long nine hours’ flight when it struck me how much the city had changed in the course of a decade. 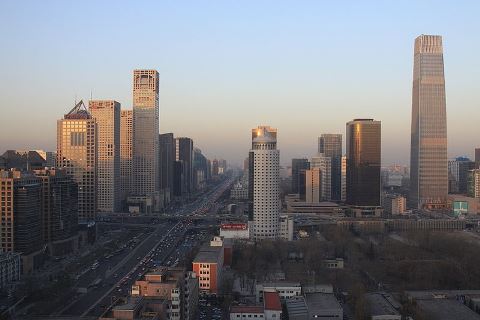 I’d last been to Beijing about ten years ago, and there were many things I didn’t recognize.

My taxi ride from the airport showed me that most of the bicycles and rickshaws had vanished in favor of cars. Dense smog was hanging over the streets, and I understood at once why expats in Beijing frequently complain about air pollution.

This time, my destination in the city wasn’t a hotel, though. Luckily, I could combine my trip to China with a visit to my sister and her family. They live in a typical Chinese neighborhood – a hutong, a narrow alley lined by courtyard buildings.

In these small apartment complexes, families live very close together, often sharing a bathroom with their neighbors. Local life basically happens in the little backstreets, and it’s quite different from living in an expat compound. 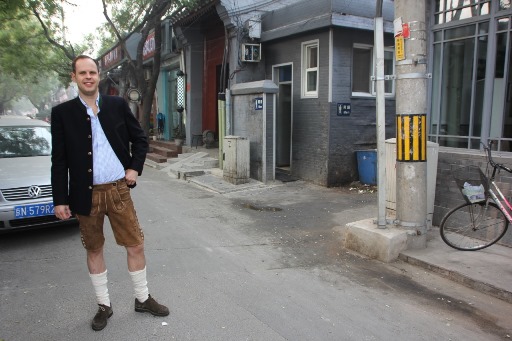 Unfortunately, there aren’t that many of these courtyard dwellings left. Lots of Beijing’s old-fashioned neighborhoods were torn down to make room for high-rise buildings and apartment towers with glass façades.

The family reunion, however, had to wait a little. I could just hop into and out of the shower before I needed to set out for our InterNations Event.

Our Beijing Ambassadors team had organized an Oktoberfest-style party at the Kempinski Hotel’s Paulaner beer tent, and the event started at noon. So I put on my Lederhosen and Janker (Bavarian leather pants and woolen jacket) and called a taxi to take me to my first Oktoberfest in China. 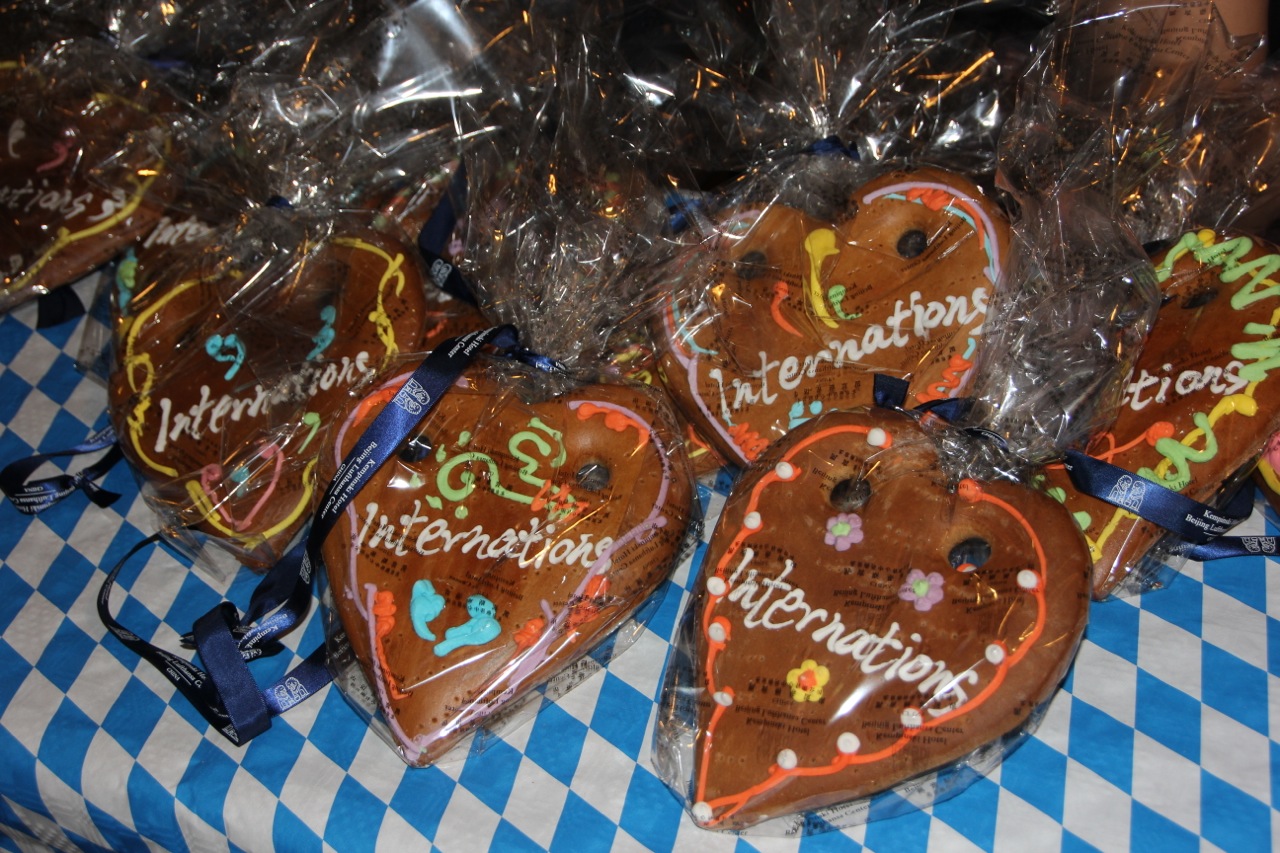 I still remembered the Kempinski Hotel from my time at Lufthansa, and they’d done a great job with the Paulaner beer tent. Some people wore Tracht (Bavarian-style clothing), there was German beer, and even a brass band “imported” from Bavaria, so to speak.

A dancing troupe performed several folkloristic dances and demonstrated how to make music with a collection of cowbells. However, when the lead singer reappeared on stage dressed as Elvis Presley, it all started to feel just a little surreal.

Jaime and Catalina, our Beijing Ambassadors, gave me a warm welcome and presented all guests with an InterNations Lebkuchenherz (gingerbread heart), which served as a nice souvenir. Both of them have been InterNations Ambassadors for quite a while.

Jaime’s an architect from Colombia, and Catalina is a fashion designer from Craiova in Romania. But the two of them share more than their expat background, their Ambassador position, and their passion for design. They found love abroad – and eventually got married in Greece.

The InterNations Oktoberfest Event went on until 5 pm, and right after I needed to dash to the next taxi. I’d promised to meet up with my sister’s family at Dadong, a local restaurant famous for the best roast duck in Beijing. 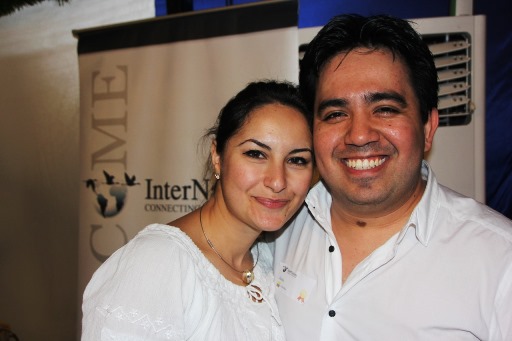 Walking into the restaurant in my Oktoberfest leather pants felt a bit weird, and quite a few of the Chinese guests couldn’t help having a look at this odd laowei (foreigner).

But the duck was definitely worth it! Beijing duck is a delicious meal, where little pieces of meat are rolled into mini-pancakes, together with plenty of vegetables and Hoisin sauce or sweet bean paste.

On Top of Town

Luckily, I still had time to get changed after dinner for the day’s second InterNations Event. It took place on top of Beijing’s highest building, at China World Summit Wing, a luxury hotel in the China World Trade Center complex. 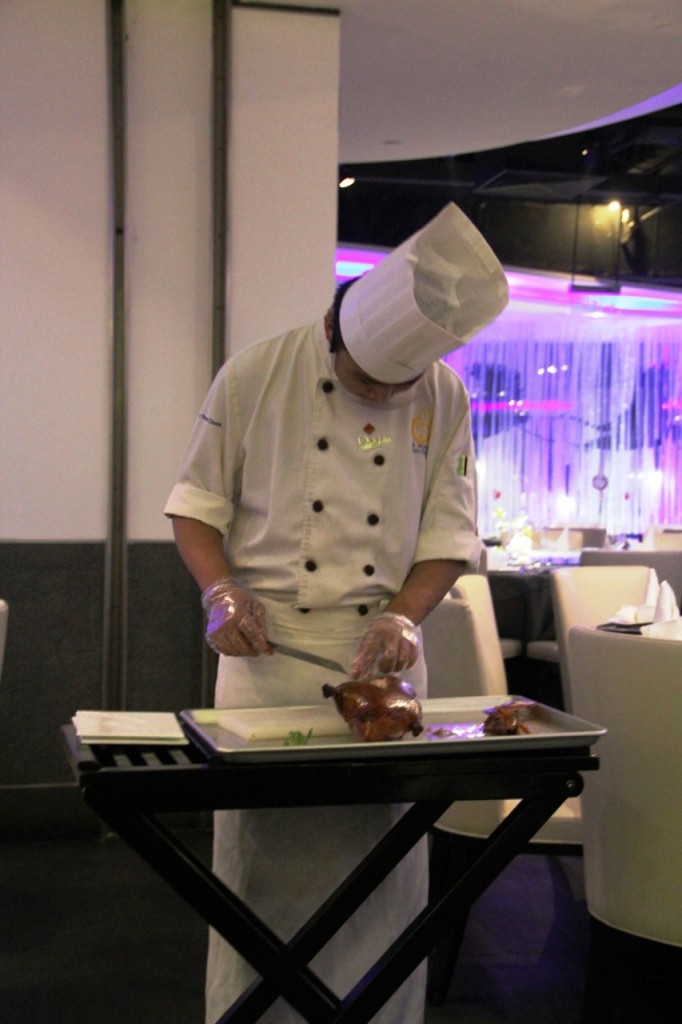 The Lounge on the 80th floor is perched over 300 m above the city. From here you are supposed to have a marvelous view of Beijing, but all we could see was a soup-like mixture of smoggy clouds.

The venue made up for this disappointment. The manager, Imbi from Estonia, made the InterNations Community feel welcome immediately. In contrast to the Oktoberfest Event, the members were dressed up very elegantly, and just like before, everyone seemed to have a great time.

In my brief welcome speech, I got to thank Jaime and Catalina and all of our InterNations Group Consuls, who organize fun activities like tennis matches, live music gigs, and professional networking. By now, there are over 35 Activity Groups in Beijing!

I was also happy to promote the Beijing Volunteer Group, organized by Semih, a Turkish expat working for a French hotel chain in the Asia-Pacific region. He and his fellow Group Consuls support the “Stars and Rain Institute”, a local NPO for autistic children and their families. 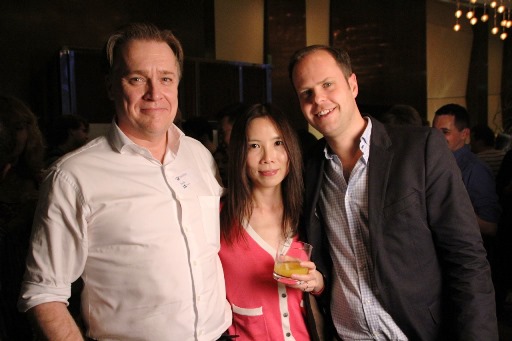 In addition to finally meeting all these committed InterNations members in person and getting to chat with friendly folks from around the globe, talking to Rurik from Sweden was one of the highlights of the evening for me.

Rurik wanted to thank me because he’d met his wife, an expatriate from Taiwan, at one of our InterNations Events. It’s occasions like this that show me how our idea of an expat network truly touches people’s lives.

The following morning, I woke up early as we wanted to go on a family trip to the Great Wall of China. In stark contrast to the previous day, a glance out of the window of the courtyard house revealed a blue and sunny sky.

It took about 1.5 hours to get to Mutianyu, and we were lucky that we did not end up in a traffic jam. Along the way, we passed the newly built conference center and hotels designated to house the APEC summit in November. 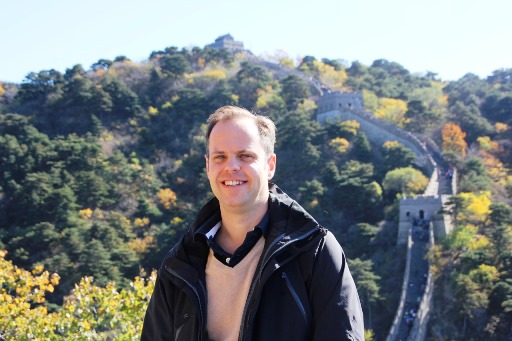 Factories were to shut down for an entire week to avoid major air pollution, and most cars would be forbidden from driving in order to keep the streets free for the visiting heads of state. Even the facades along the convoy’s route had received a fresh coat of paint!

In Mutianyu, there’s now an entire tourist village for visitors coming to see the Great Wall – complete with Chinese restaurants next to a Starbuck’s and a Burger King. A bus took us from the village to the foot of the wall. From there, a chair lift brought us all the way to the top.

It was exactly as spectacular as every tourist guide claims: originally 21,000 km long (or “only” about 6,500 km, if you count just the fortifications erected during the Ming dynasty), more than 2,000 years old in some parts, and the only building so far to be photographed from the International Space Station. You can’t actually see it from the moon, though. 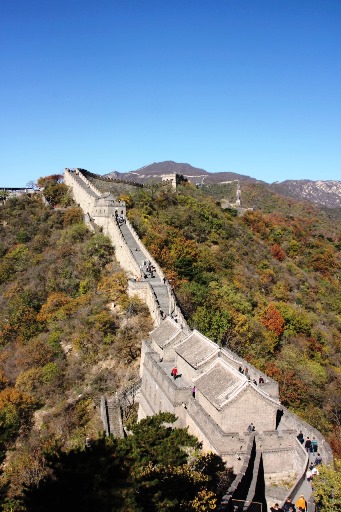 Nonetheless, it always served its purpose well – to defend China from countless armies and invasions. The Chinese soldiers patrolling the Great Wall must have been really strong walkers: It was rather steep in some places, and we did a fair bit of climbing.

But the view from the wall was the best reward for our exertions: Under the blue sky, the surrounding forests had begun to turn red and yellow, and it was a glorious autumn day. For the way down, we opted for a toboggan ride, which was great fun for my nephews and niece.

Before heading back home, we also got to try Chinese dumplings with various fillings. As a perfect ending to this day, we enjoyed a traditional Chinese reflexology treatment – a special massage for your feet, which was a nice relief after a day of walking up and down the Great Wall. (And I bet the imperial soldiers didn’t have that luxury!)

The Temple of Heaven and Sanlitun

On Sunday morning, I was up bright and early once again, as there was such a lot to discover in Beijing. Taking the Beijing Subway, which is a very convenient, though crowded way to get around the city, I arrived at the Temple of Heaven.

In the park surrounding the temple grounds, lots of local residents were enjoying their leisure time. I spotted people dancing the tango, doing tai chi exercises, or playing badminton. 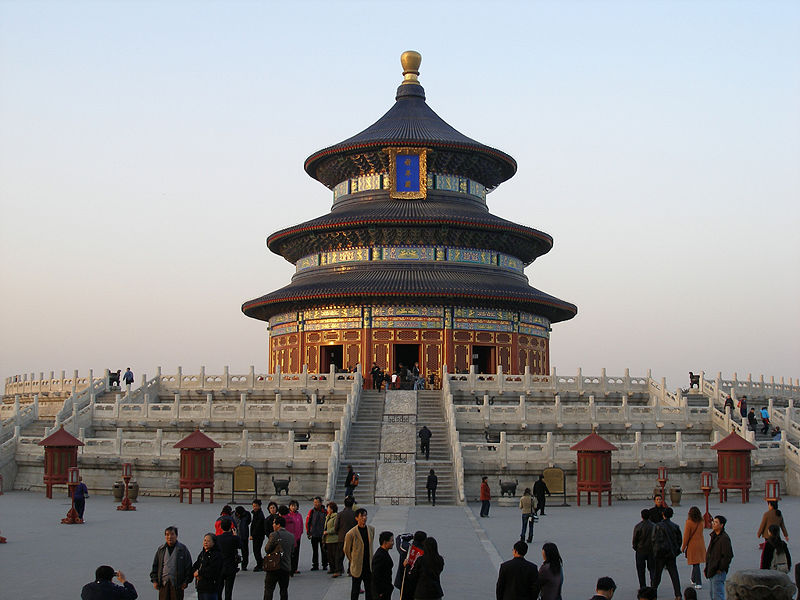 Others had assembled a whole choir and a small orchestra to sing, make instrumental music, and practice opera arias. Along the main pathway, groups of card-players and mahjong enthusiasts were sitting down for a game, and women relaxed on a park bench while knitting or crocheting at record speed.

The Temple of Heaven itself is one of the most beautiful sacred buildings that I have ever visited. It was erected for the Emperors of China to sacrifice to tian, the deity of heaven, and pray for good harvests.

In the southern part of the temple complex, you’ll find the so-called Heavenly Center Stone. Legend has it that this is the center of China and thus, naturally, the center of the universe. In imperial China, only the Emperor was allowed to stand here. Today, everybody can do it and make a secret wish, so of course I did.

After a quick stroll through the neighboring pearl market, I met up with Jaime and Catalina, our Beijing Ambassadors. We had lunch together at the Park Hyatt Hotel and enjoyed some wonderful Chinese seafood while talking about the development of the InterNations Beijing Community. 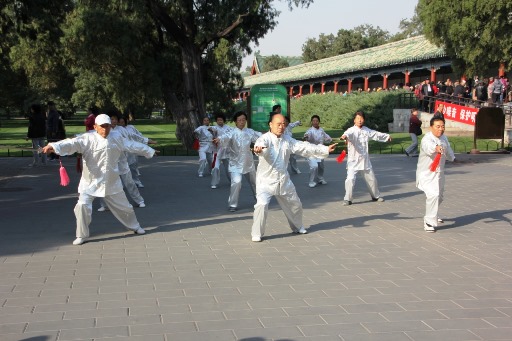 I got to spend the afternoon in Sanlitun to do some souvenir shopping before heading off to try Beijing’s finest hot pot, a really spicy fondue-style food from southern China.

At the restaurant, a traditional noodle-maker impressed the guests, especially the children, with his artistic way of food preparation. In other parts of the room, waiting guests could while away the time by getting a manicure right there at designated tables. But I decided to limit myself to tasting the hot pot, which really lived up to its reputation.

The Forbidden City and Houhai Lake

On the following day, I took the metro to Tiannamen Square. It is the site of several important events in Chinese history. 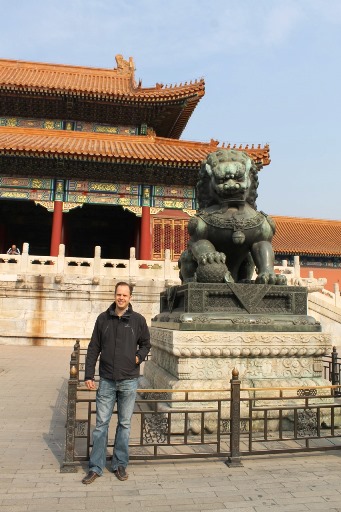 Plenty of people come here to see the Mausoleum of Mao Zedong and the Great Hall of the People. Foreign visitors are often on their way to the Forbidden City, located just north of Tiananmen Square. I, too, joined a private tour given by a Chinese student, who showed us round the former home of China’s emperor and his court.

After the tour, I climb Prospect Hill, a public park situated on an artificial hill behind the palace complex. From there, you get a wonderful view of the sprawling Forbidden City with its 9,999 rooms.

A rickshaw then took me to nearby Houhai Lake in Xicheng District. The neighborhood is famous for its scenic areas, former royal mansions, and hutong streets. Today it’s full of bars, restaurants, galleries, boutiques, and hotels attracted by the popularity of its picturesque ambience.

In the evening, we got to have a good-bye dinner at Dali Courtyard Restaurant, which specializes in regional cuisine from Yunnan. Once again, I noticed how much the fabulous Chinese food differed from the dishes you usually get in Chinese restaurants back in Europe.

The dinner party was a lovely end to my trip to an amazing, ever-changing city. I couldn’t wait to see how Shanghai, the country’s business capital, had developed.