Our guest blogger Julie, recently arrived in Europe, shares her impressions of the first InterNations Event that she and her husband attended.

Having moved from Charleston, South Carolina to Vienna, Austria only recently, my husband and I both joined a networking website for expatriates about four months ago. We were hoping it would help us meet new people and offer the chance to make some friends in an unfamiliar city.

We had no idea how active the group was, for when we went to RSVP for one of the events, the guest list was already full! Finally, after three months of living in Vienna, we were able to sign up before an event filled, and so you can imagine our excitement at being able to attend our first official InterNations event. 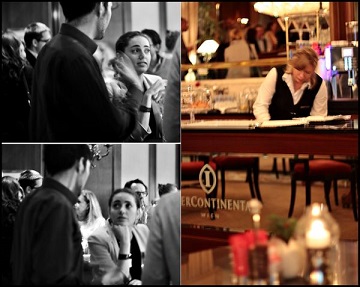 On a night with a bit of drizzling rain and glittering city lights, we made our quiet way across the cobblestones of the local Stadtpark to the Intercontinental Hotel Vienna. As we were ushered into the lobby, we were warmed by the soft light of a crystal chandelier that filled the entire room, hanging over the elegant wooden bar.

We had arrived to the One Million Members Vienna Event rather early, so we were lucky enough to find two of the last remaining seats at the bar. My husband handed his blue and white checkered InterNations poker chip to the bartender and ordered a beer; I instead opted for the gin and tonic as my welcome drink.

We toasted ourselves for attending our first expat meeting, and starting scoping out some new contacts. Really we are looking for friends here, but also for professional contacts, especially for my husband, who is looking for a job here now that he has a residence permit.

In any case, we were not disappointed, as we quickly struck up an intriguing conversation with a couple of members behind us. She was a glamorous blonde woman with a chic haircut and red lipstick, and he was a young entrepreneur with a very unique job. We enjoyed chatting with them, about their work, InterNations, and of course, Vienna.

As our first round of drinks began to dwindle, we turned back to the bar to contemplate our next move. We ordered more drinks, and noticed how much the bar was now filling up with what seemed to be predominantly excited professionals. 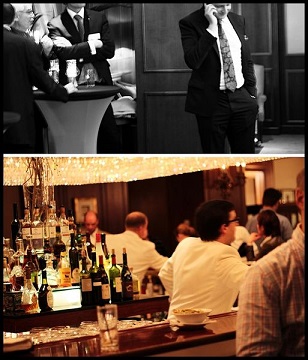 Before we knew it, we had jumped into a discussion with a young woman from Hungary, who was not only an interesting conversationalist, but was also really friendly. We talked for the better part of the next hour, as it was her first InterNations event as well. The three of us concluded that it was a pretty busy night, with 600 attendees having signed up to come.

But the energy in the group was bright, and soon we had introduced ourselves to two more new faces. One of the most fun things about the group of people at the InterContinental was the variety: everyone had a different story, where they were from, what they did, what they were looking for as members of the expat club. Everyone seemed to have an air of the future, of great things to come thanks to their new-found (and established) connections.

Not only did we celebrate the ambience and company at the One Million Members Event, we look forward to finding great friends and promising opportunities through our new association with InterNations Vienna.