After part 1, here is the rest of the travel diary that covers the trip of InterNations founder and CEO, Malte Zeeck, behind the scenes of Silicon Valley.

The following morning, we enjoyed a hearty breakfast in the hotel restaurant, taking in the view of the Golden Gate Bridge, Alcatraz Island, and the cable cars going up and down Nob Hill. Once we had finished eating, it was high time to set out for Menlo Park, 1 Hacker Way. As you might know, this address houses the head office of Facebook. 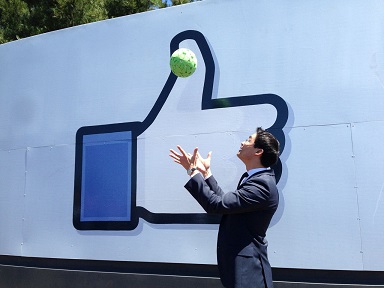 Our welcome was by none other than Sheryl Sandberg, Facebook’s chief operating officer since 2008, one of Time magazine’s 100 most influential people and often cited as one of the 50 most important businesswomen in the US – quite a role model for the German start-up folks to emulate. Ms Sandberg told us more about Facebook’s business strategy (now strongly focused on mobile users), and introduced us to executive staff from product development and software development, who explained how the development process works in their company lab.

Again, we had the opportunity to tour the huge campus of a famous Silicon Valley business. Facebook took over their headquarters from Sun Microsystems, and it rather looks like the self-contained campus of a US university, complete with diverse restaurants and little stores.

Here, we met up with several German developers working for Facebook (Germans are apparently everywhere in Silicon Valley), who shared anecdotes from the quarterly Facebook hackathons. Four times a year, the software engineers pull an all-nighter where they can design or program whatever they want – a sort of practical brainstorming session for future software innovations.

Sadly, we did not have much time to ask the German staff more about Facebook. The schedule was once more really busy, and we had to move on to Stanford University, where Dr Rösler gave a speech promoting Germany and its IT industry to the assembled students. 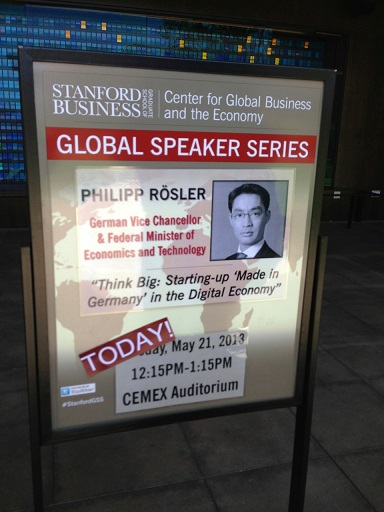 In the States, the German economy is probably best known for automobiles, so the minister wanted to convince the young people from Stanford of the advantages of the German start-up scene – and its innovative, even “cool” business atmosphere. He also showed that the “American dream” of the “self-made man” (or woman) is alive and well in Germany today. The minister himself came to the country as a nine-month-old baby from a Catholic orphanage in war-torn Vietnam, and was adopted by a family from Northern Germany.

The interest of the Stanford students in the minister’s speech, as well as in the opportunity to chat to IT entrepreneurs from Germany, was really invigorating to see: Who knows – maybe the next Mark Zuckerberg was among them? In any case, here’s to more transatlantic ties between our countries!

Business Angels in the Valley

After Stanford, we took a somewhat late lunch at SAP North America, with various personalities from local VC companies among the guests. German-born Andy Bechtoldsheim, the co-founder of Sun Microsystems and an early investor of Google, gave a talk about the IT industry in the Bay Area and what’s important for the success of a start-up.

There is even a German Silicon Valley Accelerator to help German entrepreneurs get off the ground in the Valley. A few members of our delegation then had the unique opportunity to make a pitch for VC funding in front of the audience, and we noticed again how wide the range of business ideas in our group was.

Once we’d gone on a leisurely stroll through Palo Alto, the next appointment beckoned: dinner together with Dr Rösler, a number of investors, and the representatives of about 100 German IT companies.

This evening’s guest speaker was Marc Andreessen, who developed Netscape, the first graphic Internet browser, and is now an opinion leader and super angel investor in the US IT scene. As might be expected, he had some pretty interesting stories to tell about his experience as a company founder in the nascent days of the World Wide Web. We also got the chance to network with other VC representatives that night, before Kai Diekmann, the editor-in-chief of Germany’s biggest tabloid, asked us to a party at the Axel Springer mansion.

From the West Coast to the East

The toughest members of our delegation started off Wednesday morning with a brisk jog in the direction of Golden Gate Bridge, but I must admit that it seemed way too early for me. 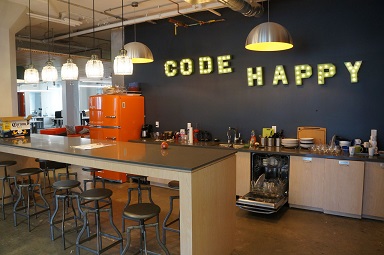 I rather preferred to get up in time for our first official meeting of the day: a visit to Runway SF, a small, but influential incubator on Market Street, where founder Allan Young described the current business climate in the Valley.

Silicon Valley is still marked by an attitude reminiscent of the great Californian gold rush in the 19th century. Plenty of people flock to San Francisco to make it here, attracted by the numerous success stories of the Bay Area.

It did sound pretty enticing, and after visiting yet more famous companies, like Twitter or Airbnb, many a member of our German group, from cities like Berlin or Munich, started dreaming of opening a branch in this beautiful region as soon as possible…

Alas, it was time to say good-bye to California! Once again, our delegation boarded the government plane and was off to the other side of the country – to Washington, DC.

After a 4.5 hour flight to DC, we enjoyed the advantages of another direct shuttle service to the Park Hyatt Hotel. In the lobby, three of our four InterNations Ambassadors in DC were already waiting for me. Thus I left the delegation behind to join Yumi, Christine, and Madhan on a walk through Georgetown, down to the Potomac River. There we found a nice bar, where I invited them for drinks, and we could sit down to chat about their fascinating international CVs and the development of the InterNations Community in the US capital till late into the night. 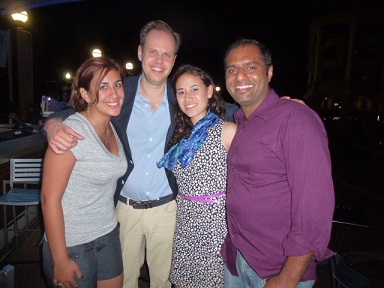 On the following day, we were up for another early start. 1776 DC – our first call – is a brand-new incubation platform set up to support young entrepreneurs in the DC area. In addition to the official reception, which included Dr Rösler and Vincent C. Gray, the incumbent Mayor of the District of Columbia, we also formed quite a few informal ties between the IT industry in DC and the start-up businesses in Germany, especially in Berlin.

After this fruitful networking opportunity at 1776 DC, we got a guided tour through Washington, while Dr Rösler went off for a meeting with Ben Bernanke, chairman of the Federal Reserve, and other politicians in his role as the German Federal Minister of Economics. So we saw the famous Washington Mall, the White House, and the splendid-looking Library of Congress on Capitol Hill, where we were served lunch. 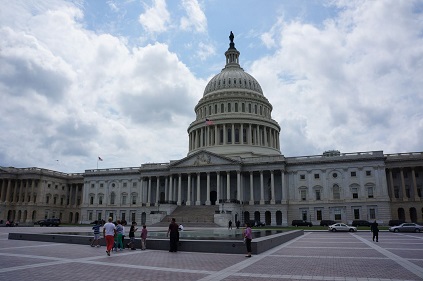 Afterwards, we participated in a panel discussion on cyber security at the DC office of Germany Trade and Invest, the economic development and marketing agency of the Federal Government. Then the time had come for a rather intense debriefing with Dr Rösler and Dr Peter Ammon, the current German Ambassador in the US. We were all agreed that we had learned lots of valuable lessons during our trip, had made useful new contacts, and were busy making plans for the future. The general atmosphere of the debriefing was very enthusiastic – someone even read a poem aloud, and we became fairly emotional about the past few days.

Before we headed back home to Germany, we gathered for a last dinner reception with many German guests from DC on the rooftop of the W Hotel. Catching up on sleep, well, that was what the flight back across the Atlantic Ocean was good for. After the minister had thanked his staff for organizing this great trip and congratulated a team member on his birthday, I think we all fell asleep pretty quickly, from sheer exhaustion.

When we arrived in Berlin, we had to say farewell to our new friends – but that’s no reason to worry: We’ve already scheduled a follow-up meeting. Stay tuned.