Recently, InterNations founder and CEO Malte Zeeck paid a visit to our InterNations Communities in two very different cities with a big international population. Right after Central America, it was time for him to be off to Northern Europe!

Thankfully, my next trip involved less strenuous traveling than Mexico City. A few days after returning home, I set out again, this time for the latest InterNations Event in Copenhagen.

The Danish metropolis is only 1.5 hours by plane from Munich. However, upon arrival, I thought I might have traveled much further to the north. When I left Germany, spring had come at long last, but Copenhagen welcomed me with plenty of grey clouds and a cold shower of rain, alas.

Our Ambassador Team in Copenhagen

The weather didn’t dampen our spirits at the InterNations gathering, though. Our current Ambassador team had chosen the Pier 5 lounge bar of the Marriott Hotel for our venue, an impressive luxury complex right on Cophenhagen’s waterfront. Unfortunately, I could not meet and greet all three Ambassadors. This event was hosted only by Tobias and Marisa. 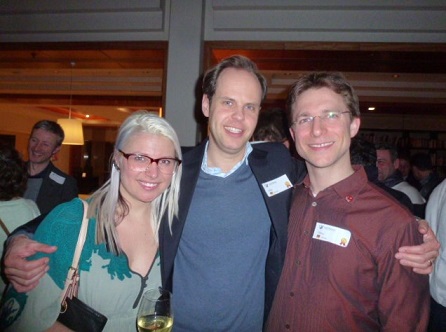 Solomon, their fellow Ambassador, was out of town that day to attend to personal issues back home in the UK. I hope I’ll get another chance to talk to him in person one day.

Tobias is a veritable InterNations “veteran”: The German expatriate has been the InterNations Ambassador in Denmark ever since we started organizing local events in Copenhagen. After working in Mexico for several years, he came to Scandinavia for his current job as a product manager in the international automobile industry. He has been committed to bringing the local expat community together for about five years.

As Copenhagen has grown into a Local Community with 6,500 members, Solomon and Marisa have joined Tobias in this task. Marisa is a Latvian-American from the state of New York, who has lived in about half a dozen countries and speaks just as many languages. But the aspiring singer and songwriter is especially passionate about music, the universal language that transcends all words. 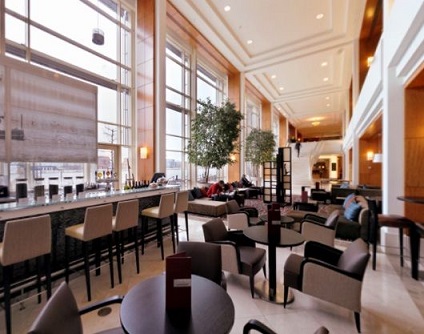 Marisa and Tobias definitely did a great job at creating an event with a very relaxed and jovial atmosphere and a very diverse crowd of guests. On the official sign-up list, we counted 58 different nationalities, from Argentina to Zambia.

The attendants all seemed to enjoy the InterNations Community a lot: When I started mixing and mingling after my short thank you speech, I received plenty of feedback, as well as suggestions for new features and activities in Copenhagen. Right now, there are ten Activity Groups in the city, but there’s always room for many more.

Moreover, the Ambassadors told me that they might soon introduce a second monthly event, as the interest and number of guests has remained consistently high for some time. Maybe this is due to what a few InterNations members confided in me: For some reason, they said, they found it a bit hard to make local friends outside the international community, though they generally enjoyed life in Copenhagen.

Exploring the “City of Spires”

Over the next two days, I took the time to unwind a little and to discover this beautiful city, in spite of the cool and windy weather. There was plenty of sightseeing to be done! I also popped into Simons Natklub, said to be the trendiest club in Copenhagen at the moment.

Nightlife and clubbing aside, I certainly didn’t neglect Denmark’s amazing cultural highlights: I managed to admire the royal residence at Amalienborg and to catch a glimpse of Copenhagen’s iconic mascot, the statue of the Little Mermaid, which adorns the harbor promenade. 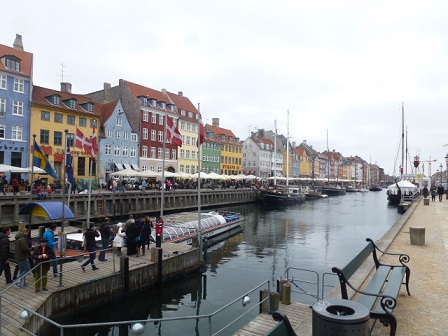 I then strolled through the heritage waterfront and entertainment district of Nyhavn, with its quaint, bright-colored buildings, and through the popular amusement park of Tivoli.

And of course, near the famous spiral church tower in Christianshavn (one of the many spires in the horizontal skyline), there’s the tiny neighborhood of Christiana, a semi-autonomous community with about 1,000 residents. Established on the ground of some abandoned military barracks in the 1970s, the “free town” has attracted hippies, squatters, political anarchists, gay activists, and other members of the alternative counter-culture for decades.

By now, Christiana has become one of Copenhagen’s tourist attractions, but unfortunately, I don’t have any photos. A restriction on visitors taking pictures is one of the self-imposed rules that the community agrees on.

Copenhagen is indeed a lovely place, which is well worth another visit – hopefully, with more sunshine, though.