InterNations guestblogger Abu Muhammed, a US expatriate who is now living in Saudia Arabia, shares his impressions of his first trip to Indonesia.

The first thing that I noticed about Jakarta was how domestic the airport seemed.

It reminded me of my childhood neighbor’s front yard. Her name was Ms White, and she had a lot of cats, who were eventually killed by Sam, my rabid (or crazy, depending on whom you asked) German shepherd. Before the carnage (and her hasty move away from the neighborhood), Ms White kept a 1950s-style yard, where her assortment of plants flourished. The plants, signs, and even the lawns that I spotted as my taxi left the Jakarta terminal had the same home-spun feel, due to the quaint arrangement of monuments and greenery.

I was tired beyond words. I had brought something to read, but the slightly elevated temperature of the cabin and my excitement at making the first-time trip to Indonesia kept me marinated in my own sweat. As the cab navigated the throughways from the airport, I leaned from the near center of the back seat and rested my shoulder against the window to give my sore behind a rest, after nine hours of near-immobility on the plane. The cityscape along the highway appeared ubiquitously covered with rust, which concealed itself within the approach of the purple dim of night. 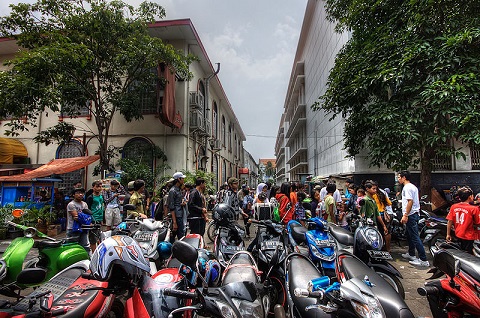 At the advice of a friend, I’d arranged to hire a driver for a week for around a million rupiahs (a hundred US bucks). After the first five minutes on the road, I realized the driver was worth every penny. Jakarta was crisscrossed by a maze of super-highways: under them, there were myriads of streets and byways full of exhaust-spewing jalopies, bumper to bumper, with all kinds of scooters and cycles buzzing through any conceivable space in their trek through the city.

I had driven a cab for five years in the fourth largest city in the US and the prospect of getting behind the wheel in Jakarta still left me in breathless apprehension. Most people, even those who walked, wore pale blue hospital masks. The whole scene seemed rather post-apocalyptic and a bit worrisome for a hapless tourist like me.

As we drove through the city, I saw trenches beside the road, though free of discarded appliances, funneled rivers of fluid that resembled the fluorescent green of anti-freeze and/or something that had the bright, white hardiness of Elmer’s Glue. As we traveled on the main highway, I saw huge buildings that in the States or the Middle East would, by their brownish tinge, be considered abandoned.

The area was quite reminiscent of the factory districts of Kensington, Philadelphia, during the free fall “recession”, which killed the local hustle and bustle forever, and the lack of activity on a weekday appeared evident by the sparse foot traffic around here.

And the faces of the people: no one in Jakarta seemed particularly sad or happy to me. Perhaps this was just my cultural misinterpretation of the politely neutral public “face” in Southeast Asia. Or maybe this was life where people who had jobs shared their two-room box with another desperate soul, and it was okay.

The traffic was like a slow-moving lava stream: every bit of space was packed, and centimeters separated us from side swipes, which, in the most miraculous manner, rarely happened. Once, during our daily drives, I looked up and saw the rusted hull of what had been a passenger train frozen in corrosion at its final destination. At a side door, a young woman holding her infant looked out into the river of cars below. 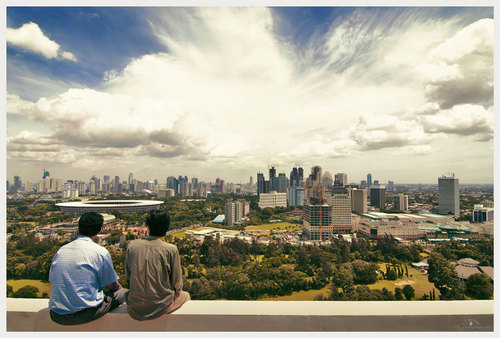 What amazed me was how clean the young mother looked in contrast to her surroundings. Her clothes and that of her child looked as if she lived as well as I did in my five-star hotel. I thought that since this was how most people in the world lived, maybe my life was the odd exception – an unimaginable style of wealth and pampered indulgences experienced by those who had enough money not to really care about it. In Indonesia’s case, by the way, the country has plenty of millionaires, despite its occasional “third-world” ambiance.

During my last few days in Jakarta, my driver took me up into the mountains, which somehow appeared rainy without rain and gothic without mist. The shops and mountain towns were often nook-like collections of businesses, stores, and masjids that hung precariously between the road and the sloping elevation and the sea beyond. The people who lived outside the city were busy but, unlike their city counterparts, seemed unencumbered with the day-to-day struggle. I sensed peace was something they might experience in their homes, far above the city lights and tangerine haze of Jakarta’s polluted sunrises and purple sunsets.