After spending my Christmas vacation in Thailand, I was headed to another part of Southeast Asia to visit the InterNations Communities in Singapore and Malaysia.

Our Largest Community in Asia

The Singapore Community in particular is among the largest in our expat network – no wonder, considering the city state is an expatriate hotspot! Nonetheless, over 15,000 local members is an impressive number, isn’t it? I did not only want to revisit the city, where I hadn’t been for 15 years. Sadly, it was also time to say goodbye to the outgoing InterNations Ambassadors in Singapore: Sahil from Pune (India) and Catarina from Recife (Brazil) would host their last official event and introduce their successors to their guests.

As I like exploring the various locations where our InterNations Communities are based, I arrived in Singapore one day early. 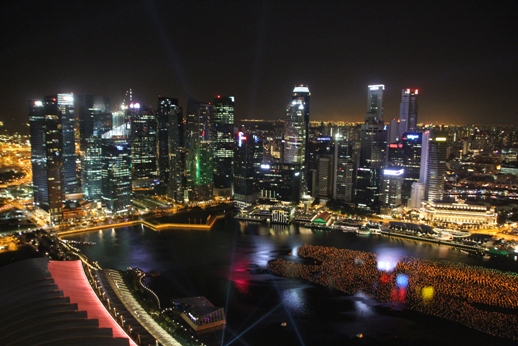 I’d almost forgotten the peculiar character of this metropolis: Singapore strikes me as a curious mixture between the local color of Southeast Asia, the urban architecture of New York City, and the tidiness of Switzerland, where everything is clean, efficient, and almost too well organized.

The Most Spectacular Hotel in Singapore

During my stint in Singapore, I was staying at the famous Marina Bay Sands Hotel, which I’d been recommended as a once-in-a-lifetime experience. The hotel is huge and ultra-modern: consisting of three towers, it boasts over 1,000 rooms, as well as a grand, boat-like sky garden. The pool on the roof top overlooks the skyline: when you take a few laps up there, it’s easy to imagine yourself swimming right into Singapore’s cityscape, as though you were flying!

Lots of guests seem to have succumbed to the charms of the Marina Bay Sands in 2012. According to the manager, they had been fully booked throughout the year, with an average 98% of all rooms occupied at any time. Considering the sheer size of the hotel, these figures are impressive indeed. I wanted to try the sky garden and especially the pool for myself, and I fortunately got the chance to do so. The roof top happened to be rather crowded, though, and all deckchairs were already taken. 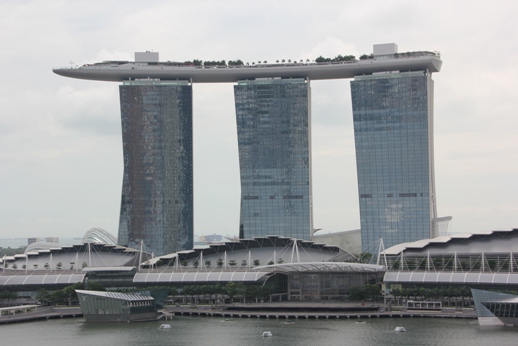 So I soon decided to give up on swimming and take a tour round the city instead.

A hop-on, hop-off sightseeing bus was a quick and easy way to reacquaint myself with Singapore. Though I had been here before, I did not recognize much. The city has undergone tremendous change in the past 15 years. The whirl of the tour left me with one main impression: design lovers and fashionistas could spend a small fortune here.

I don’t think I have ever seen so many fancy shopping malls and brand-name boutiques in one place. The economy of the tiny “Asian Tiger” must be going strong. In fact, Singapore’s population has the highest percentage of millionaires in the world. Well, someone must be shopping at all those high-end stores.

In the evening, it was high time to set out for Dempsey Road, a popular area for pubs and restaurants, where our event took place at a lush garden bar called La Hacienda. Originally, we’d expected a comparatively low turnout: it was the third InterNations Event this month. Also, the date between Christmas and the New Year is an opportunity for many expats to go back home for the holiday season. However, Catarina and Sahil had to close the guest list at nearly 350 sign-ups to prevent crowding the venue. 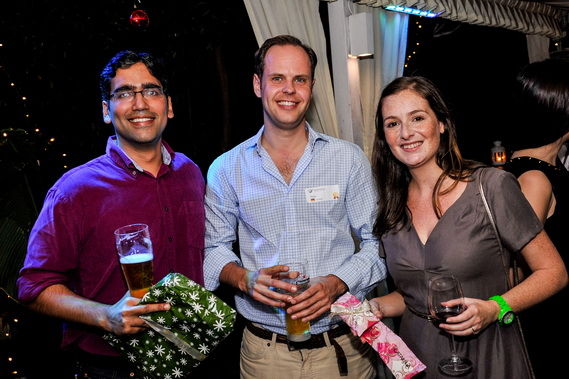 These two definitely did a wonderful job to bring the InterNations Singapore Community together – not only on that particular night, but during their entire time as Ambassadors. I was really glad that I could thank them in person for all their efforts.

The farewell party had a twofold, or even threefold, purpose: it was Sahil’s birthday, too, and he was celebrating in style. Moreover, it was an ideal occasion to introduce Neera, an Indian-Australian with plenty of expat experience in the Asia-Pacific region, who will be part of the InterNations Ambassadors team in Singapore. Unfortunately, Giovanna – Catarina’s Brazilian compatriot and the other new Ambassador – couldn’t make it to the event. I’d have loved to meet her, too. However, since we are looking for a third InterNations Ambassador for this large community, many other members approached me with questions. So I did get to know plenty of friendly and interesting people on that night.

In addition to the relaxed atmosphere and the delicious drinks at La Hacienda, the event provided the great opportunity to promote our Singapore Charity Group. Group Consul Sid Kumar, a Singaporean with Indian roots, raised over 600 Singapore dollars, which were donated by tonight’s guests for the local Red Cross Home for people with disabilities. Thank you, Sid and all the generous donors, for this unexpected Christmas gift, Catarina and Sahil, for a lovely last get-together, and Neera and Giovanna for stepping up to fill their shoes!

After the official closing time, quite a few people were reluctant to leave. Therefore a group went off to keep partying at the Ku Dé Ta Club. Since the lounge / clubbing venue is situated on the roof of the Marina Sands, I got to enjoy the sky garden and its amazing view of the city again…!

Off to Kuala Lumpur

Although the previous night in Singapore was rather short, I had to be bright and early to travel onwards to Kuala Lumpur, the capital of neighboring Malaysia. The two metropolises are separated by a brief one-hour flight. But since Kuala Lumpur’s airport is 70 kilometers away from the city center, it took me about as long to get into “KL” proper. 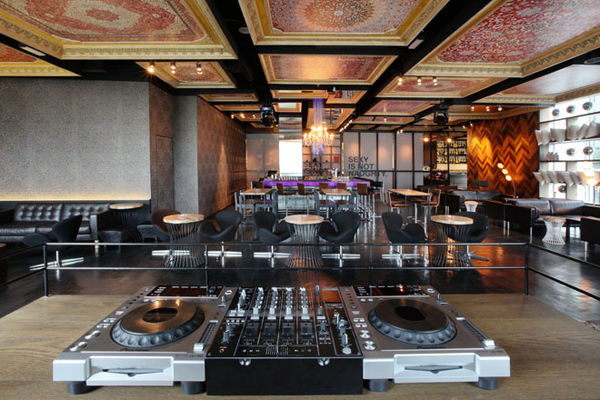 After a brief rest, I was off again – to The Bedroom. No, I’m not talking about my comfy hotel bed, but rather about a trend-setting club at the Pavilion, one of KL’s most luxurious shopping malls.

At the venue, I received a cordial welcome from Anita, our Kuala Lumpur Ambassador, an expatriate from Hungary. She was hosting this event on her own, since her fellow InterNations Ambassador Nathan was spending the holidays in his native France. But Anita was a marvelous host for our 100+ international guests from 40 different countries.

The InterNations Community in Malaysia is smaller than in Singapore, with “only” 5,000 members. The ambience at the event was even more relaxed and casual, with lots of animated small talk over the finger food and snacks provided by the venue. Perhaps the slightly greater degree of familiarity reflected the difference in size between the two communities: usually, there’s a bit more excitement and novelty in the biggest InterNations Communities, but some sort of tight-knit feeling in the smaller ones. I always find it interesting to compare and contrast such varying, but equally enjoyable atmospheres.

That night, I also enjoyed the opportunity to thank Anita officially for her splendid work. Futhermore, I got to introduce the Group Consuls Shawn and Kishore, who had recently started the Kuala Lumpur Arts & Culture Club in our Activities Groups section. Thanks to meeting and greeting so many new people, the evening seemed to pass in a blur, and I had to bid farewell to the KL Community far too soon.

On the next day, I squeezed in some sightseeing to catch a glimpse of Kuala Lumpur’s most iconic attractions, like the Petronas Towers, the Hindu temple at Batu Cave, the neighborhoods of “Little India” and “Chinatown”, and the Istana Negara, the King’s Palace. 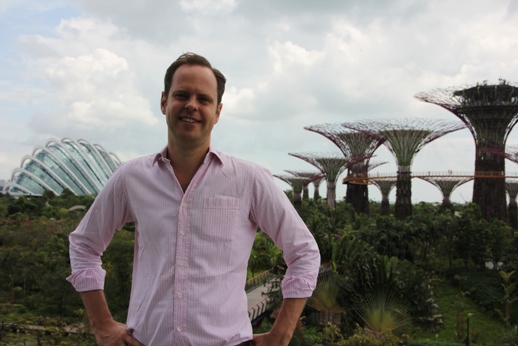 (Actually, Malaysia consists of nine sultanates and four other states. The “King” or “Paramount Ruler” is elected among the nine sultans every five years.)

The city seemed to me somewhat less neat and clean than Singapore, but paradoxically more “authentic”. Still, there were plenty of shopping opportunities, too. It was probably a good thing that I didn’t have much time before my flight: I might have given in to the temptation and purchased a slew of additional Christmas presents for my family and friends at home in Europe!

A note on photo #5: Though it appears amidst the paragraph on Kuala Lumpur, the picture was actually taken in Singapore. Sorry for any potential confusion!)