For the first time in months, I was back on the road, planning to attend the InterNations Halloween Event in Belgrade, one of our liveliest communities in Southeastern Europe. I’d never been to Serbia before, although the flight from Munich to Belgrade took me only 75 minutes – faster than a trip to London or Paris! But I was very curious as to what awaited me in Belgrade.

After catching a taxi for the ride from Nikola Tesla Airport, I received a very hospitable welcome at the Hyatt Regency Hotel. InterNations member Mike Urbanowski, himself a German expat and the Hyatt’s Director of Marketing and Sales in Southeast Europe, had kindly offered me a special InterNations rate for my stay. Thanks, Mike, for the opportunity to enjoy what is certainly one of the finest hotels in town!

However, I had little time to relax at the splendid Hyatt since the InterNations Get-Together was about to start at 7pm. Soon, I was off to join our Ambassadors at the Caffe Comunale, a favorite location near the junction of the Danube and Sava Rivers. The venue is an Italian restaurant, with a great view of the riverfront and allegedly the best Italian in all of Belgrade. To get there, I had to cross over from my hotel in New Belgrade to the Old Town, the historical heart of the city and nowadays an energetic entertainment district with lots of bars for a night out. 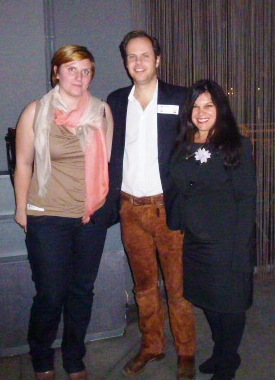 With the Caffe Comunale, the InterNations Ambassadors had definitely made a great choice – not that I’d have expected anything less.

Katica Steubl and Aleksandra Miric have always done such a wonderful job in supporting the InterNations Community in Belgrade, and they have been our local Ambassadors for up to four years. Both are impressively cosmopolitan and polyglot.

Katica has a German-Serbian background and works for the German Ministry of Foreign Affairs, as an assistant to the German Ambassador in Belgrade. (Not the InterNations one, obviously, but the real one!) She has a lot of expat experience under her belt, in places as diverse as Niamey and NYC.

Aleksandra, or “Alek”, is a marketing and communications consultant for a global finance group and describes herself as “Serbian by birth, German by education, and Greek at heart”.  Alek and Katica did not only humble me with their fluent German (my Serbian is mostly limited to zdravo and hvala puno), but they were also the perfect hosts. They really created such a great community spirit and seemed very committed to helping expats in Belgrade to settle in and have a good time. Thank you for all your efforts and enthusiasm!

Over free fingerfood and a welcome drink on the house, I began to mingle with the other guests who kept gradually arriving. About 100 people from two dozen countries were in attendance that night. Some had been to InterNations gatherings in other cities, from Athens over Baku to London, but they all reassured me how much they enjoyed the meet-ups in Belgrade.

What I really appreciate about visiting InterNations Communities in various cities is the interesting mix of people I get to meet. It wasn’t any different in Belgrade: I talked to professors, members of the diplomatic service, company consultants, fashion designers, and online entrepreneurs – a highly diverse crowd.

Although it was a pleasure to chat with so many people from all walks of life, I had to leave around 1 am. After all, I had plans for the following days and didn’t want to sleep late. Other guests, who didn’t have such concerns, moved on to a neighboring club, where the Belgrade Jazz Festival was in full swing.

On Friday morning, when I’d caught up with work, I took the opportunity to meet Zafiris Lampadaridis, an InterNations member from Greece, who also works for the Hyatt and runs the local expat website Living in Belgrade. Living in Belgrade already had graciously sponsored Friday’s event, and Zafiris and I were soon busy discussing ideas for a cooperation between our sites to better address the needs of the international community.

In the early evening, Katica and Alek took me to a cozy restaurant in a little park on the outskirts of Belgrade, Mala Fabrika Ukusa, where I got a taste of typical Serbian cuisine, with such specialties as grilled meat, ajvar, Serbian beer, and rakija. 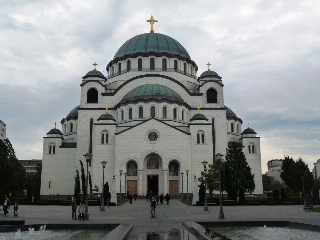 During dinner, they gave me a great introduction to life in Serbia, the country’s history, its politics, and people.

From these impressions of Serbian living and culture, I was whisked away to a Halloween party at the Canadian embassy, where I ran into several InterNations members again, as well as to catch a glimpse of Belgrade’s nightlife at a local art café.  Much of the city’s legendary club scene is usually located on “party boats” moored on the riverfront; however, due to the cool fall weather, most of them were closed for the upcoming winter.

On the weekend, I finally had time for a sightseeing tour that included some of Belgrade’s tourist highlights, especially the Temple of Saint Sava, the biggest Orthodox church in the world, the busy pedestrian street Skadarlija, and the Kalemegdan, once the city’s major fortress. Nowadays, the Kalemegdan includes a park, which was perfect for an autumn afternoon stroll, some old fortifications, a couple of museum buildings, and the statue of Pobednik (winner). 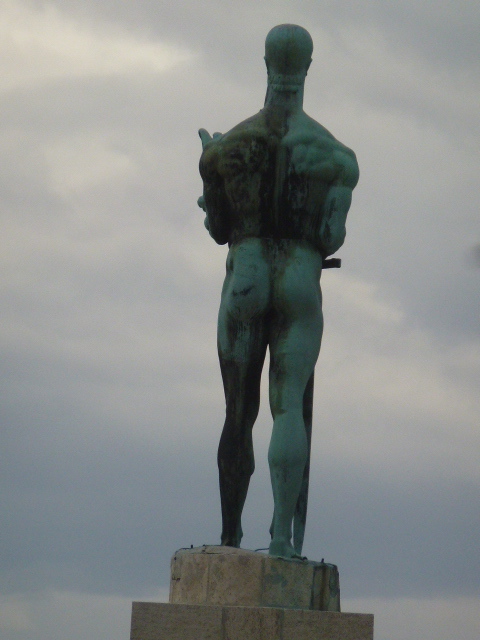 The victory monument from the 1920s celebrates the outcomes of the First Balkan War and the First World War – and, as I was told, it only ended up in the fortress because the residents objected to its construction on a public square since the triumphant winner was, well, butt-naked. Today, nobody seems to mind the nudity, and the colossus has become Belgrade’s most famous landmark. No first visit would be complete without a brief look at the Pobednik (from behind)!

My weekend in Belgrade then concluded with yet another Halloween event (this time one that appeared to be predominantly frequented by US Marines) and an opportunity to experience one of the last boat parties of the year, on the Hua Hua river bar. All in all, it was a wonderful visit. What was still a warzone back in the 1990s (I remember the headlines and TV reports about the Kosovo War from my student days…) has quickly bounced back: Belgrade is now discovering its economic opportunities and tourism potential, e.g. as one of Europe’s hippest party spots. Everyone whom I met, both Serbians and members of the expat community, were very friendly and open.

So that’s what I found in Belgrade: plenty of hospitality.