Unlike what the title, a quote from the famous 1977 hit “Heroes”, suggests, the InterNations Team didn’t attend a David Bowie concert lately. However, we did manage to assemble several intrepid heroes and heroines to take part in the Heldenrennen 2012.

The Heldenrennen or Heroes Race is a series of charity runs hosted in various European cities across Belgium, France, Germany, and the Netherlands. Every runner who would like to participate has to raise at least 300 Euros in donations for a charitable cause of their choice. 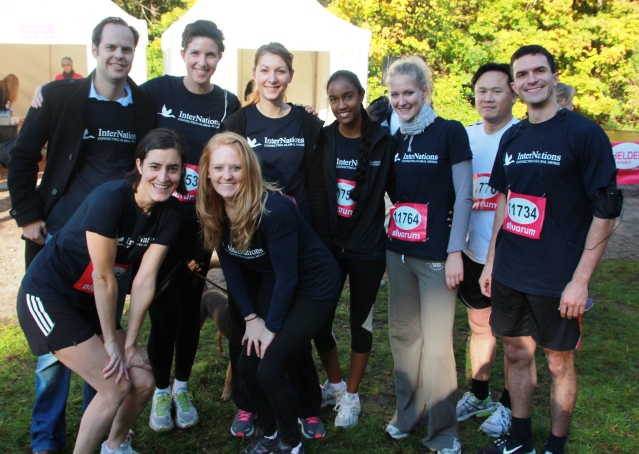 This year, the sports event came to Munich for the very first time, and 150 people out of 1,350 candidates rose to the challenge: They succeeded in collecting the required amount before the actual race and could join a 7-km run through the English Garden.

Ten local heroes represented both the InterNations Team and our Munich Community: Expats, current and former colleagues, and friends – not to mention our erstwhile “office dog” – met up near the “Aumeister” beergarden to give their best. The less sporty cheerleading crowd simply came along for moral support (and for taking pictures, of course). The weather couldn’t have been more appropriate for the occasion: blue skies, golden sunshine, crisp autumnal air, yet temperatures mellow enough for outdoor activities. So, the trail through Munich’s biggest park wasn’t all that much of a hardship for the runners, the occasional muddy puddle aside.

Alas, no InterNations member was among the three fastest sprinters (though expat Alessandro certainly gave them a run for their money and ranked among the first ten to cross the finish line). But we did score in another respect: 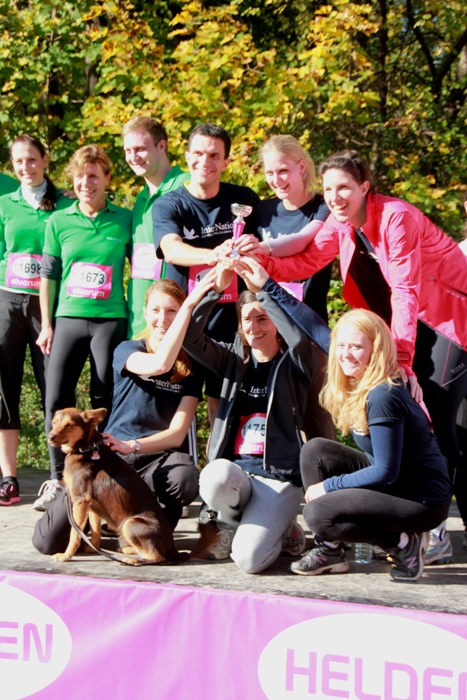 InterNations turned out to be the company with the most donations in the Munich Heroes Race. Congratulations to all our speedy runners and a heart-felt tank you to everyone who supported our cause! Thanks to your help, we gathered over 4,000 Euros for Alveni.

Alveni is a sub-organization of the German Caritas, which offers social services for refugees and asylum-seekers here in Munich. These people have to share basic accommodation in crowded shelters and dormitories, receive just a monthly allotment of groceries via a food bank, get a small sum of pocket money on the side, and can only acquire an employment permit with the utmost difficulty. Alveni tries to alleviate their situation with legal advice on their residence status, education for the kids, German classes, access to healthcare, psychological counseling, etc.

Our first InterNations Charity Group, started by InterNations Team member Sandra six months ago and now headed by Team member Ana as well as local expats Ravina and Nereo, has chosen Alveni as their project to support. Highly qualified, usually well-paid expatriates mostly enjoy the sunnier side of global mobility; international refugees from war and political persecution are the other side of the coin. In order to “give back” a little, the InterNations Charity Group Munich has already organized several activities together with Alveni: inviting the residents of a refugee shelter to a BBQ, taking their kids to an indoor playground for a day out, or donating plenty of warm clothes for the coming winter. With the Heldenrennen 2012, we can now add a substantial donation on top of all this.

Hopefully, we’ll be back for the next Heroes Race in 2013, with its fun and friendly atmosphere. We also hope to expand the Charity Group concept to several other cities in the future. Stay tuned!