For more than 20 years now, Prague has been attracting tourists and expats in ever-growing numbers. And yet the city has retained much of its national and historic identity, says InterNations member Simon, who was blown away at his first visit to the Golden City and is already toying with the idea of moving to Prague…

There’s few better ways to start on a new city than with a view; so our very first trip in Prague was a climb up the Petřín hill to the Rozhledna, the lookout tower. It was built by the Czech Tourist Club who constructed 34 viewing towers all over the country. All the others were made of brick, but this one was made of steel and it swayed in the wind. 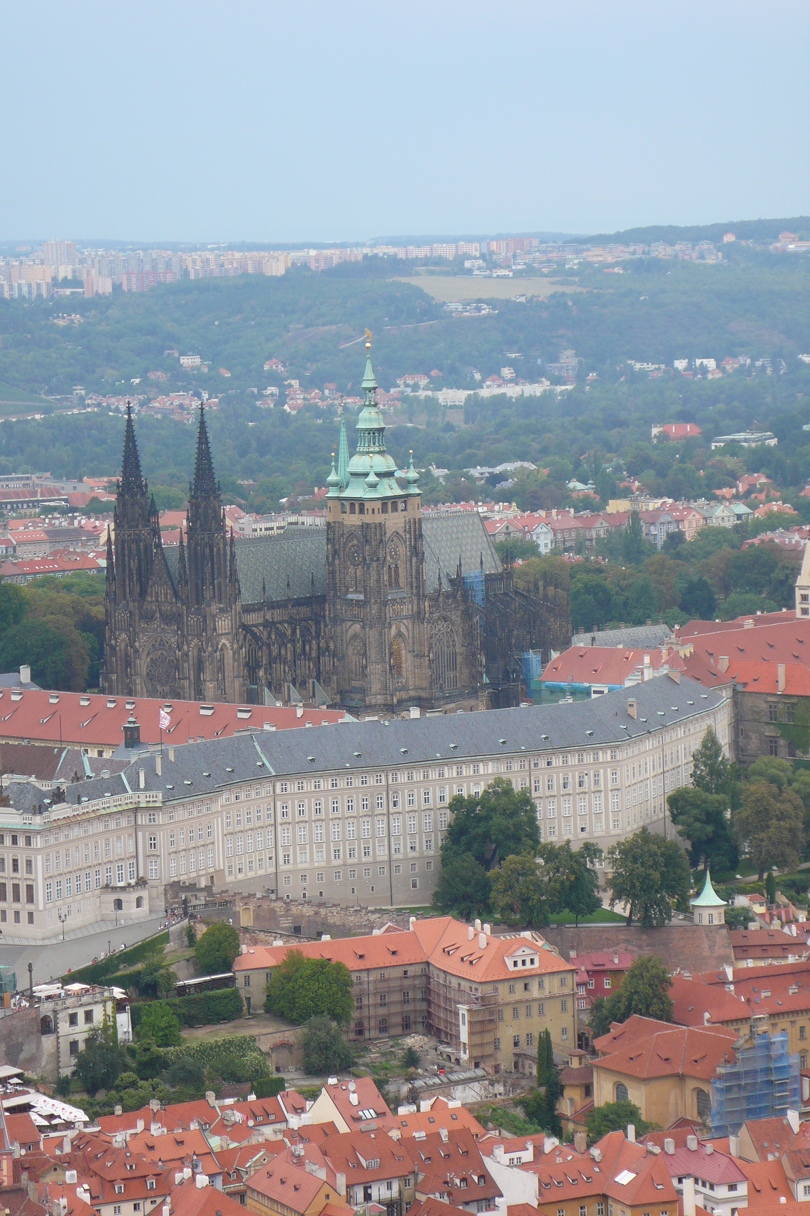 From the top, first to catch the eye are remnants of Prague’s medieval golden era standing out in dirty black stone relief from the colourful baroque plaster work that dominates the city centre. The mighty gothic cathedral looks like somebody has put it in the wrong place. Its soaring spires are surrounded and half hidden by the coloured blocks that make up the castle. Scanning right and down the hill, the eye lands next at the dark and busy Charles bridge. Impressive tower gates with green roofs and delicate pinnacles sit at either end and in the middle run a long row of sombre looking statues. On the other side of the river, much more plaster, but then, reflecting the Charles Bridge towers, are a few more medieval towers clustered around the old town square. Even at a distance the whole central district is visibly humming with tourists.

Down there, in amongst all the street acts and flashing cameras, standing large and morose, is a copper statue of Czech medieval hero Jan Hus. Jan Hus was a medieval anti-cleric who founded a strong protestant-style movement in Bohemia that lasted well over two hundred years. Much of his teachings came from the writings of English anti-cleric John Wycliff, but where Jon Wycliffe survived, his movement was short lived. In contrast, Jan Hus’s martyrdom prompted the first Prague defenestration and the birth of a Bohemian ‘Hussite’ rebellion that was never really defeated.

Not that is, until the thirty years war. This cataclysm was kicked off by the second Prague defenestration and didn’t end so well for the Czech people. 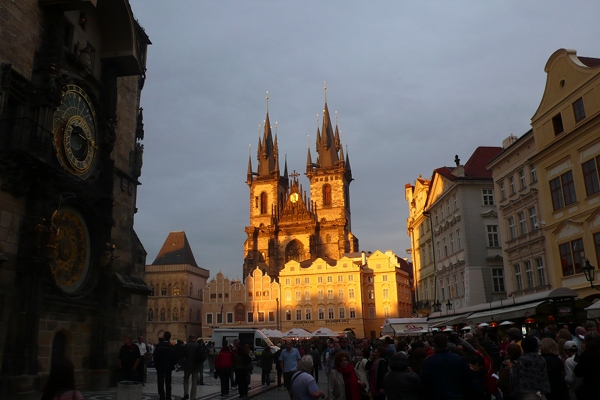 Not only did the clerics survive being thrown from the castle window – landing bottom first on a fortuitously placed dung heap – but the Catholic resurgence that followed engulfed Bohemian lands in an occupation that only ended with the first world war.

An occupation that brought with it a lot of that coloured plaster that makes much of the city centre feel a bit like Salzburg. Fortunately there is much more to Prague than just its city centre. Looking further out from our viewing platform we could see the first ring of nineteenth century suburbs come into focus. Here is a grander legacy of empire, with a large stock of elegant 19th-century town blocks, many of them inhabited today by Prague’s massive expat community. You may think you’ve wandered far enough to escape the tourists, but you’re still likely to here a lot of English spoken on these streets. Countless western travellers have fallen in love with Prague and a stop over on the European tour has turned into a protracted stay. 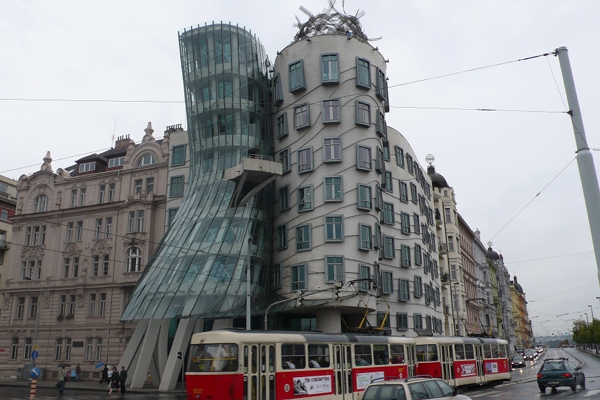 It’s in this first ring around the centre that you can also find some more interesting modern buildings, many of them from Prague’s second golden era, the first part of the 20th century. Not least among them is the art-nouveau palace that houses the UPM (Museum of decorative arts). It is full of gems from this second golden era and later we spent a happy afternoon wandering round the collection of fabrics, furnishings and prints that made up the best exhibition we visited. In particular, the glassware stands out in my memory. Not usually something I would rush to see, but the Czech glassware factory brought an unusual degree of creative flare to their vases and ornaments. Even the paperweights looked elegant and interesting. The stylish and well preserved café is also worth a visit. Just one the many stylish turn-of-the-century cafes that make up a whole tourist tour of their own. 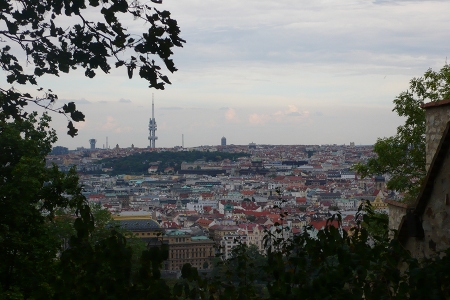 Beyond the centre, out in the distance we could see evidence of Prague’s more recent occupation. Sitting high on the horizon, lining the North bank of the Vltava, a vast row of gaily painted tower blocks formed the backdrop to the city (mirroring the coloured plaster in the foreground). The bright colours are thanks to recent ‘humanisation’ efforts on Soviet building stock that still houses over 40% of Prague’s population. Here is where most of the indigenous city folk live (and where beer prices really start to live up to their reputation). A friend who lived in one of those blocks on the horizon, told us a bit about life under communism; the compromises, the travel restrictions, the imprisonments. But, he said, “if you want to hear real stories, go to Romania. We have nothing compared to them.” I guess the further East you go the fiercer the effects of communism. The Czech republic was never so far away. Out of the Eastern viewing window, there was the gigantic tele-tower hovering over the city (at a mercifully far off distance), designed for futile attempts to block Western German television signals broadcasting images of a shinier life only a couple of hundred kilometres away. 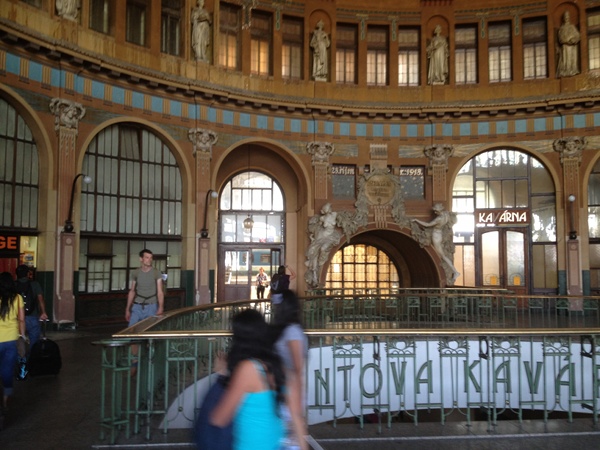 As we climbed down the spiral staircase and headed out to start our tourist rounds proper, we were to discover a city that is full of charm and pleasure. It has an artistic and alternative flavour and a huge amount of history that remains unmolested. A great example is the main station, constructed in 1909 and left in a state of unrestored art-nouveau glory. It isn’t until you take the escalator down to the basement that you realise there is a modern station and complex, with all the conveniences you would expect, sitting below it. It’s a very neat trick. Much of Prague feels this way. Despite the demands of over twenty years of mass tourism, any restorations or modernisations have been executed with a very light touch. The trams are all a good thirty years old at a guess (why update). So even if you hear more English than Czech spoken during your trip, you will be pushed to find a major European city that feels so distinctive, or so full of its own national story, as Prague.