If you could freely choose your expat destination, wouldn’t you opt for a place with a beach? Just imagine you can just step out of your house, drop your towel and take a refreshing dip in the cool blue waves while your children are happily building castles out of sand or running around playing with other kids. Well, it’s not always that easy of course. If you live in a big city, the beaches on your doorstep may be far from the idyll we all know from glossy holiday brochures. Our guest blogger Abu Muhammed has found that sometimes, driving the extra mile is definitely worth it… 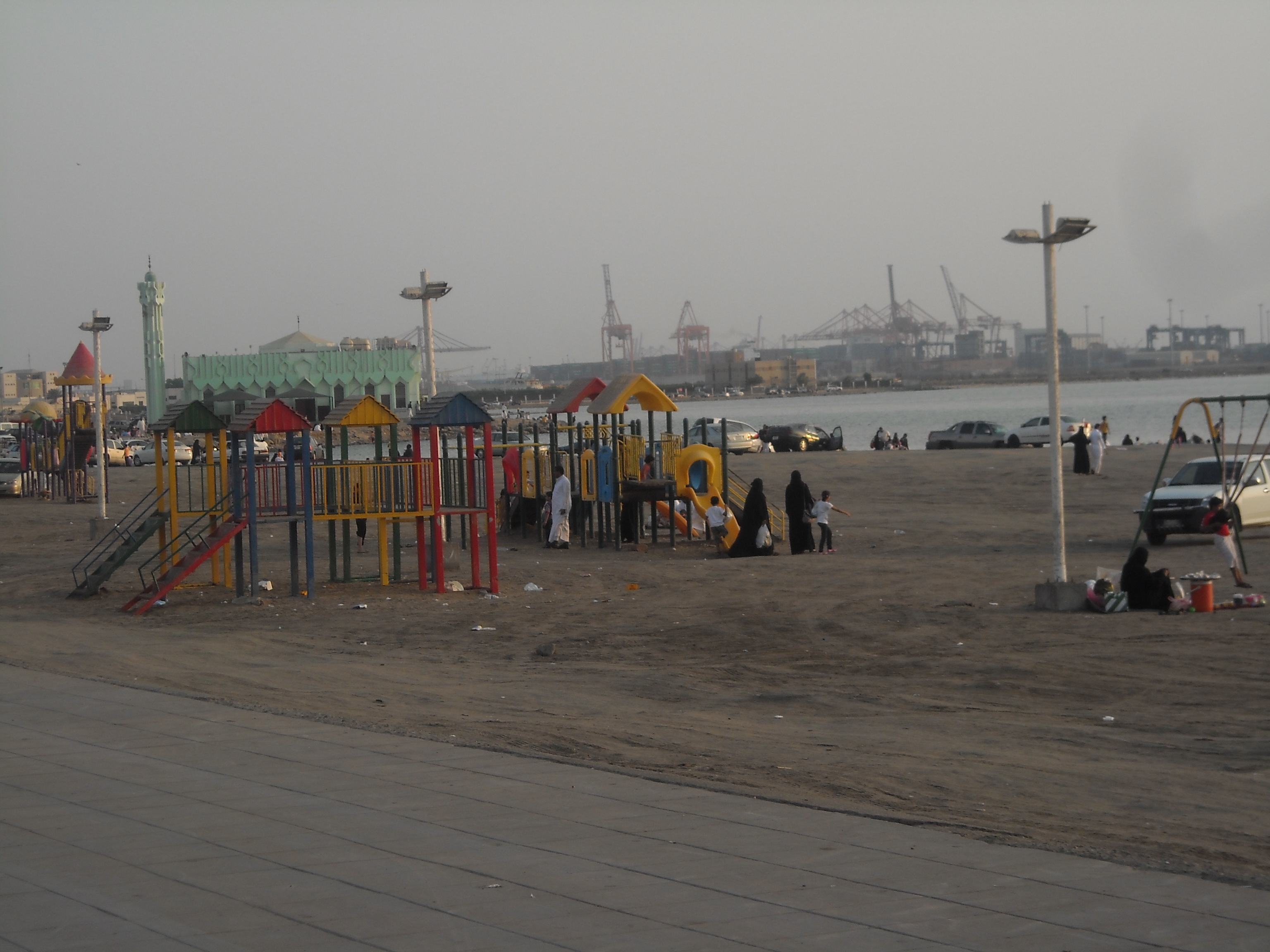 One of the big benefits of moving to Jeddah is that the western coast of Arabia is within a reasonable driving distance from a number of beaches that overlook the Red Sea. For those who live in Jeddah, the Corniche is a string of playgrounds; restaurants, marinas and sculptures of various mediums (the city is known for its numerous public displays of international modern art) interspersed among crowded patches of beach cluttered with residents trying to seek solace from the dusty city scape. Within the city of Jeddah, the beaches along the Corniche ranged from tolerable expanses of dirty sand and asphalt that bordered trash laden waters to cement retaining walls; stained with the sludge of days and years before. Locations that hosted playgrounds are decked with litter; all seem to have equipment on the wrong side of better days under perpetual lines of kids along the same polluted coastline. 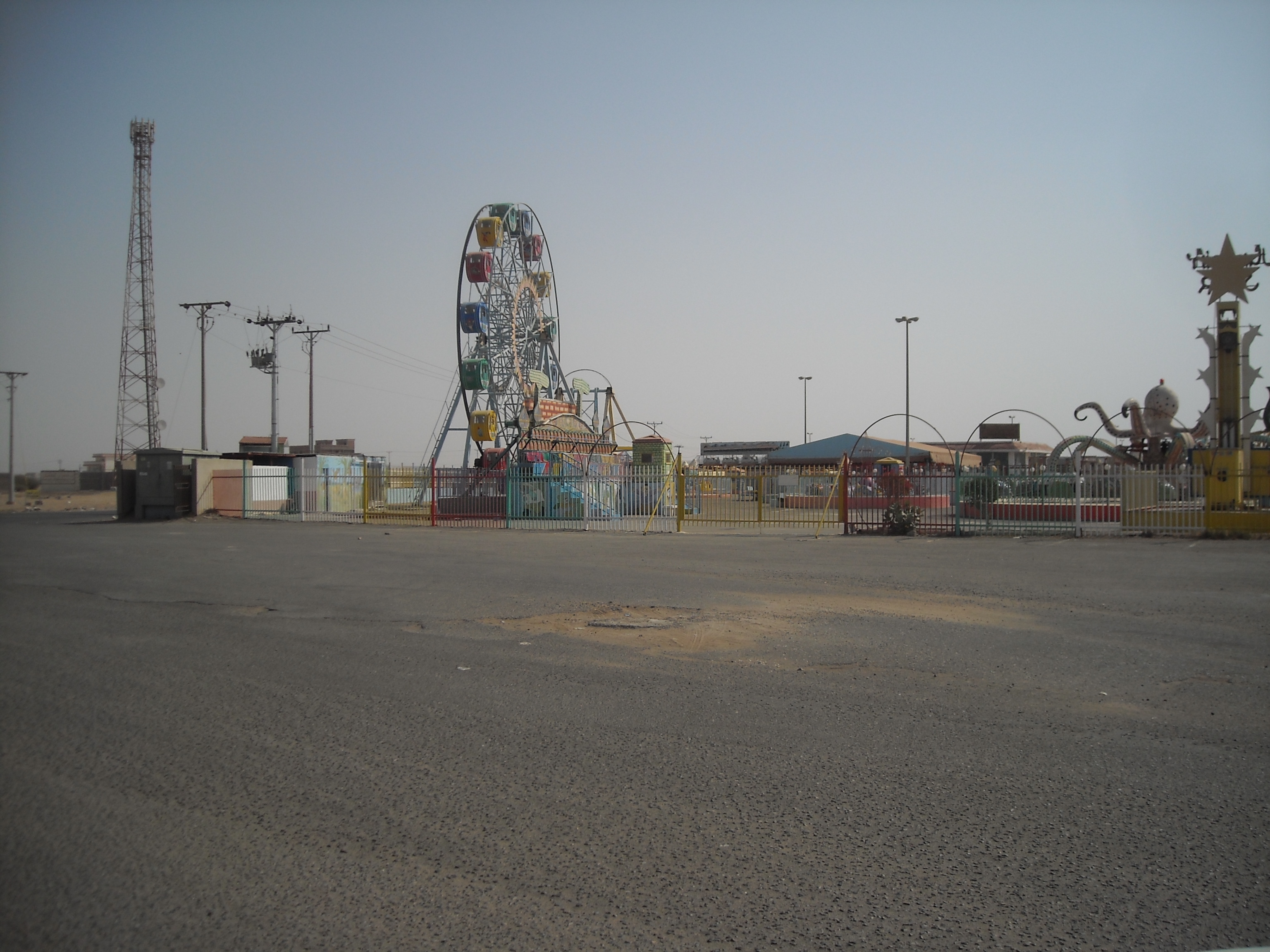 Amidst of all this are many amusement parks with carnival type rides colorfully painted and draped and lit in holiday lights with over priced concessions that often attempted to ‘hawk’ a riyal bottle of water to the unprepared tourist for 2 or 3 riyals. The whole scene took me back to the Jersey shore before the casinos took over—minus the aroma of tanning lotion that always permeated the air, food and everything else in those days.

Just outside the city limits is the small coastal community of Abhur. The district had a few quaint upscale marinas and Istaharahs (private party rentals). There are small resorts; some of which (as rumor would have it) are access free to the general public despite some formidable gating. Still, on days and times most people go to be on the beach is like trying to get on the New York ‘A’ train at rush hour. The crowds are so dense it was hard to see the beach they stood on. Why people squeeze themselves between the hordes of Shabab (unmarried boys) and other folk that congested (after trying it a couple of times myself) the beach was beyond my comprehension. The Shabab keep the water rough with their Jet Ski antics and their impromptu football scuffles make the beaches dangerous places for small children to play in or out of the water. 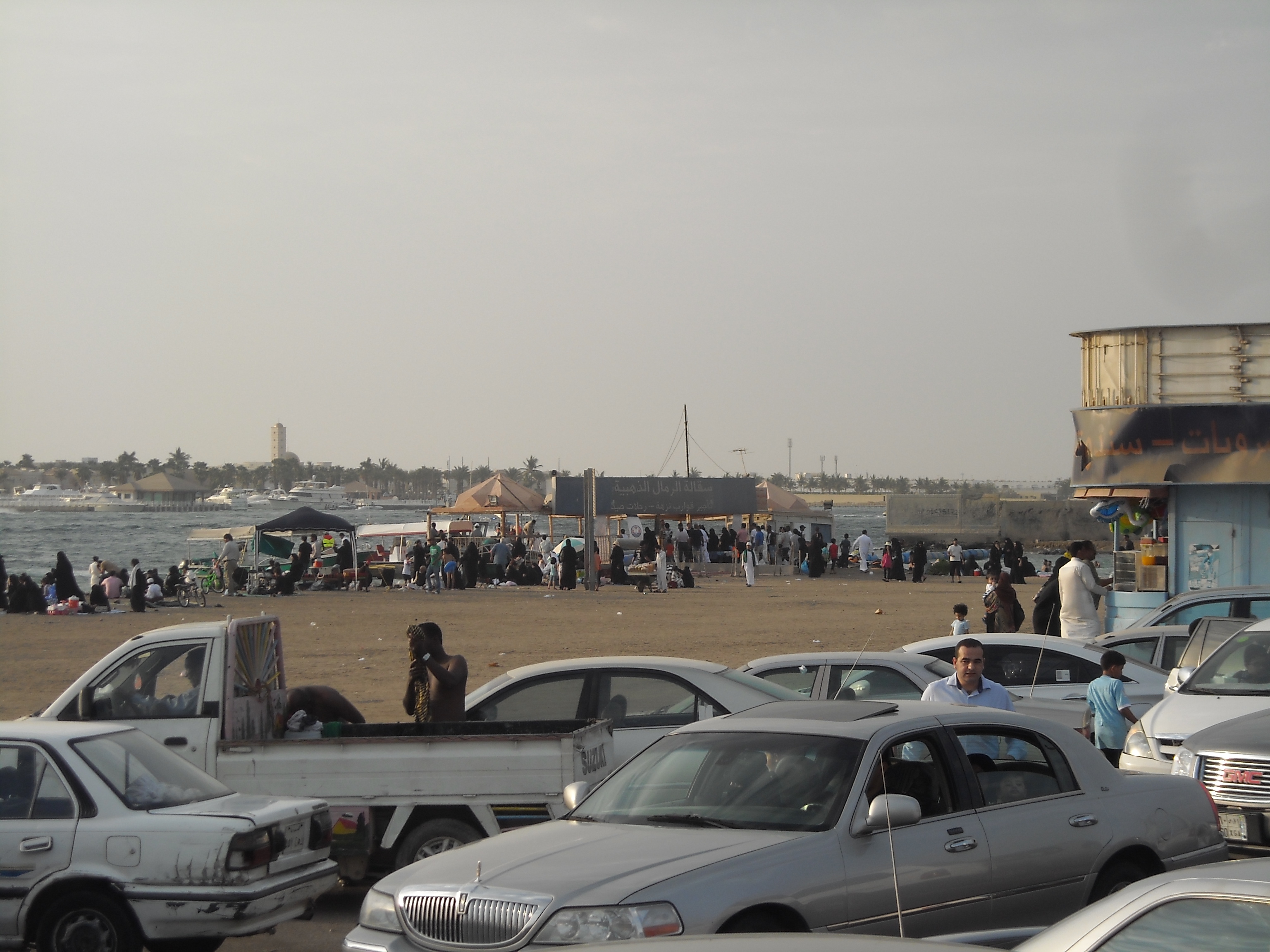 And there is the trash, the omnipresent bits of paper, the debris from Jeddah; that has become Jeddah. Even the big, ugly green rubbish containers meant for the discarded to be thrown in were judging from the piles of paper, cans and bottles everywhere apparently ignored for the convenience of just dropping it on the ground next to them. I finally elected just to stay away from the beach or arrange to make the effort to go so early in the morning to avoid the crowds.

I tried driving further out on the beach front only to find the walls went as far as the manageable road and beyond.

I finally gave up on a family outing to the beach except for the purposes of a workable swing or slide for my smaller children to make ‘whoopee’ on.

Until a Saudi friend told me about the beaches of Thuwal.

“Just take Medina Road until you see the signs. It’s not far past the checkpoint– about twenty minutes; then make a left and follow the road. The beaches are never crowded and it’s clean,” he said. 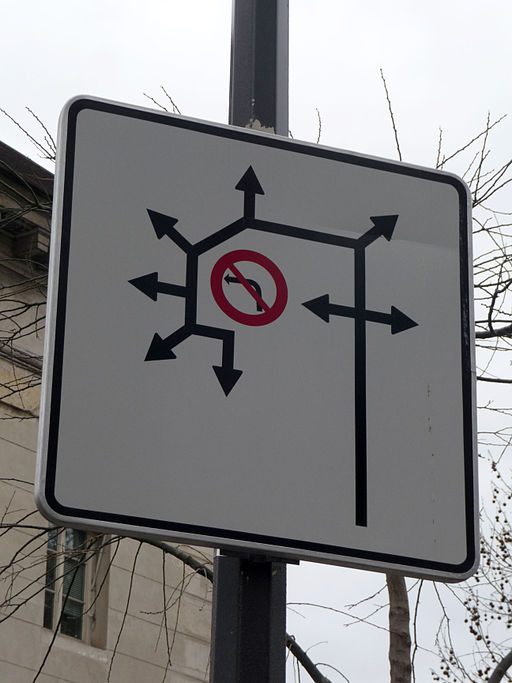 Now anyone who has been to the Middle East for a while knows that most people have little to no ability to give clear or complete directions. Though streets do have names, the locals tend to navigate by landmarks and as a matter of course, force everyone else (even expats) to do the same. It seemed once you were around for a while, the precise description of where to turn and how to get there became the vague geography of ‘near’ this place and ‘behind’ that—as if the rest of the intervening cityscape didn’t exist. At first, I thought this was the conversational style of the people. You ask where Mc Donald’s is; the response would be ‘Jeddah.’

‘Where on Tahlia Street?’

This exchange would go on and on until every detail was revealed. In the west, when you ask where something is, despite the simplicity of English compared to Arabic, the exchange is a lot shorter. In the west, the person being asked generally assumes you want to know how to get to the exact location rather than engage in a 15 minute conversation that could have taken 15 seconds. Unfortunately if you don’t have the patience to conduct this type of interrogation to get all the information for your trip, you will likely spend a lot of time lost and trying to figure the whole thing out on the road. Later I realized this had more to do with the social disposition of the people and their concept of time than the odd prospective of a peculiar culture. 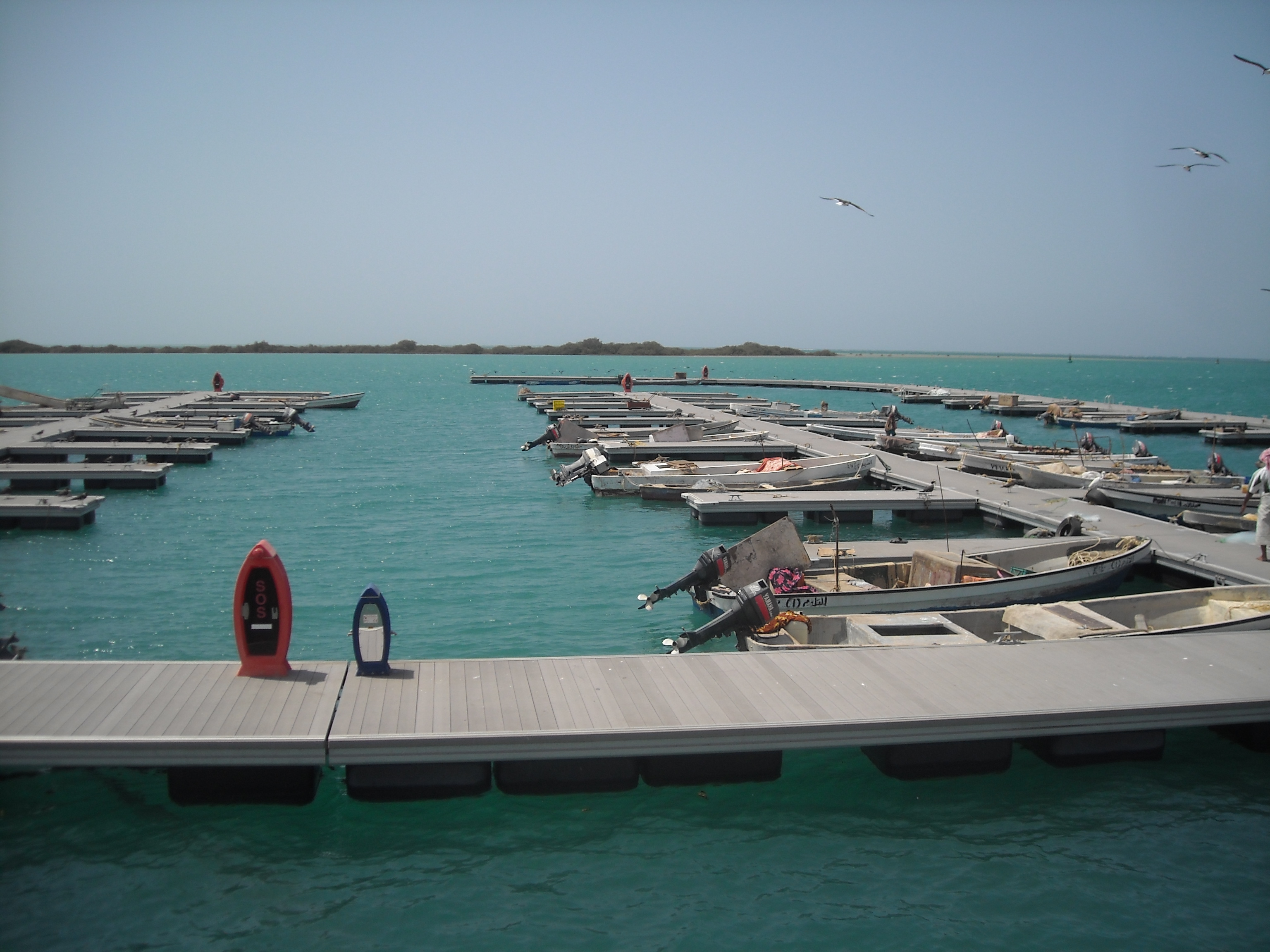 So one day when I was about to take a mid-morning drive to the ‘same old, same old’, I took the route my friend told me about; convincing myself I could extrapolate whatever information he left out. After all, a beach was a beach and I knew if I went west far enough I would probably reach it.

“Let’s have an adventure,” I said to my family.

To my surprise, Thuwal was exactly where he said– approximately 87km or so outside the city limits. At the Thuwal exit, the right turn put us on one road to a sentry arch that stood half the size of the 25 foot palms that bordered and divided each side. As we drove up the road, signs directed travelers to a coast guard hospital and a fish market. 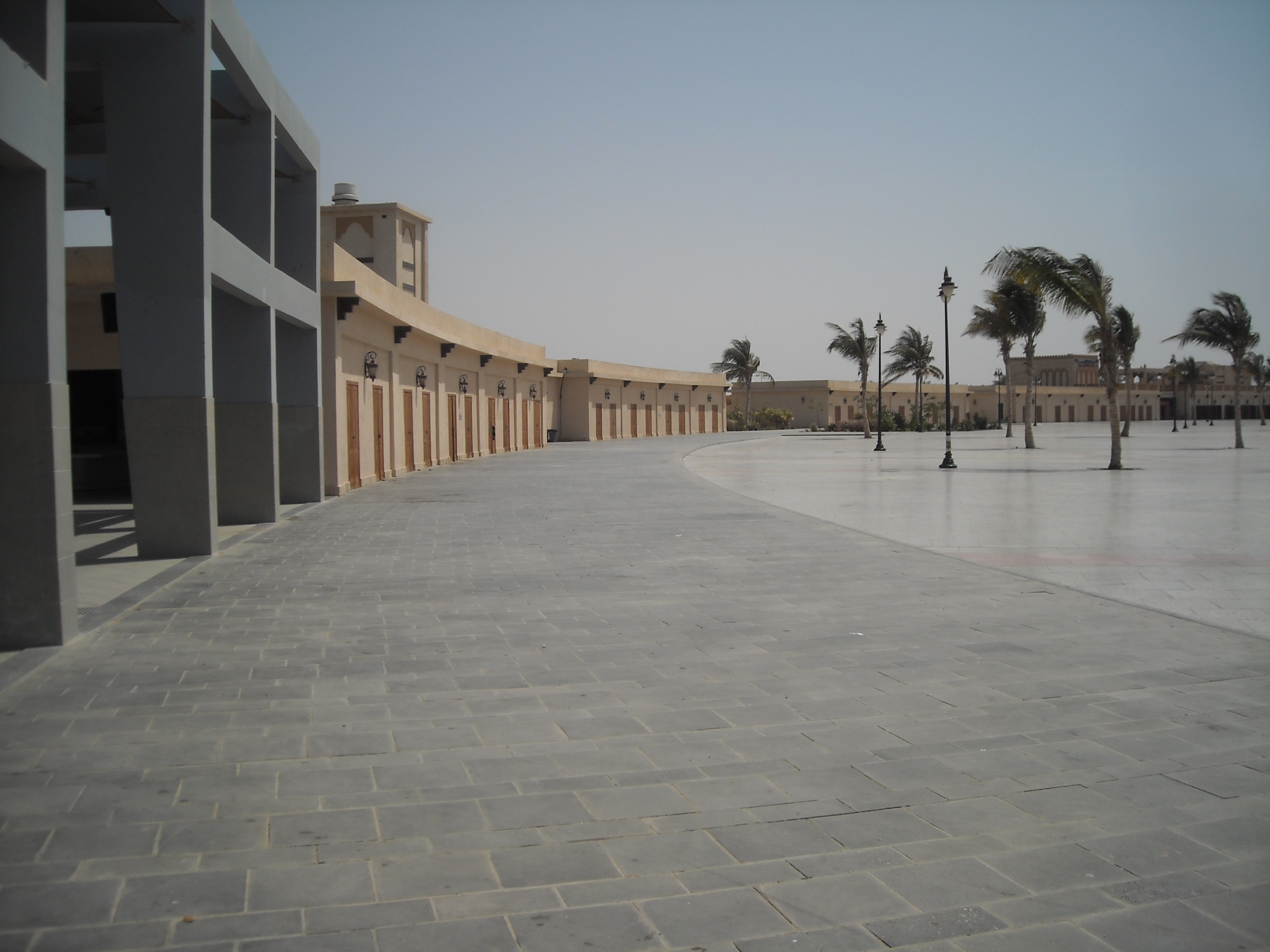 Paved like a road in the US before the republicans began using public highway money to finance the bank bailout, families were waved on while Shabab were halted for a question or two. I thought this might mean the facilities were reserved for family use and the waters were Jet Ski free – though there was always nepotism of Wasta (the pull of the big shots) that gave rules the uncertainty of exception.

A two minute drive brought us to a dock where local fishermen moor their small boats. The marina gave way to a massive pavilion that showcased a fish Sooq (market) at a picturesque white sand beach lined with tree (not palms) lawns with modern small shaded pavilions where families could sit and enjoy the relatively pristine waterfront. Although there were more people than I thought there would be, there was still enough room to make one feel that he wasn’t sharing the beach with the rest of the planet.

The absence of Jet Skis apparently may mean they were banned. 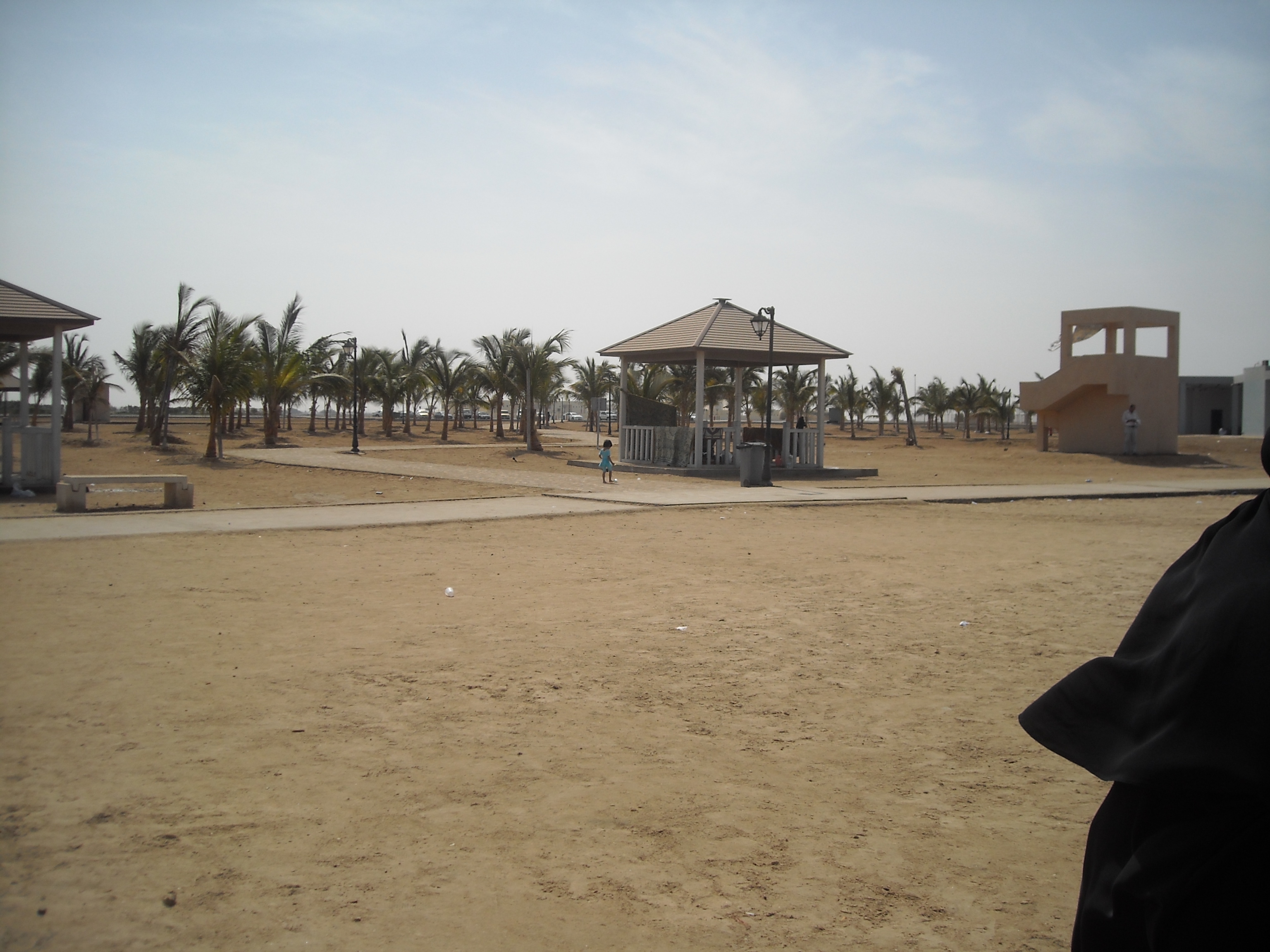 Shabab appeared to be monitored and segregated on a stretch of beach further down from the docks. We went back in the morning the next day and it was what my Saudi friend had said. There was practically no one there.

Compared to the Jeddah waterfront, it was Eldorado.

Thank you Abu Muhammed for your contribution to our blog.

Abu Muhammed is an American freelance journalist and technical writer who lives and works in the Middle East. He teaches at a private college in Saudi Arabia and is a contributing blogger for the Mideast Posts. To read more of Abu Muhammed’s writing please visit http://mideastposts.com/author/abu-muhammed/.

All pictures of Jeddah and Thuwal courtesy of Abu Muhammed.