InterNations member Philip, our British expat in Tehran, is blogging about his first Nowruz experience – the Iranian New Year, which he celebrated in true traditional style.

In the west we have Christmas, Halloween and Easter. However, in Iran it is a completely different ballgame. The Iranian New Year (Nowruz) has been at the turn of spring since time in memoriam, predating the Christian calendar by eons. This continues today with the new year of 1391.

Coming from the Iranian day system (4 Day Feast), this special day in the calendar has the glorious mantle of being the day you jump over fires to cast away the bad omens from the previous year. Being English, health and safety warning lights were flashing in my foresight. I found that I wasn’t the only one who had concerns about this day. 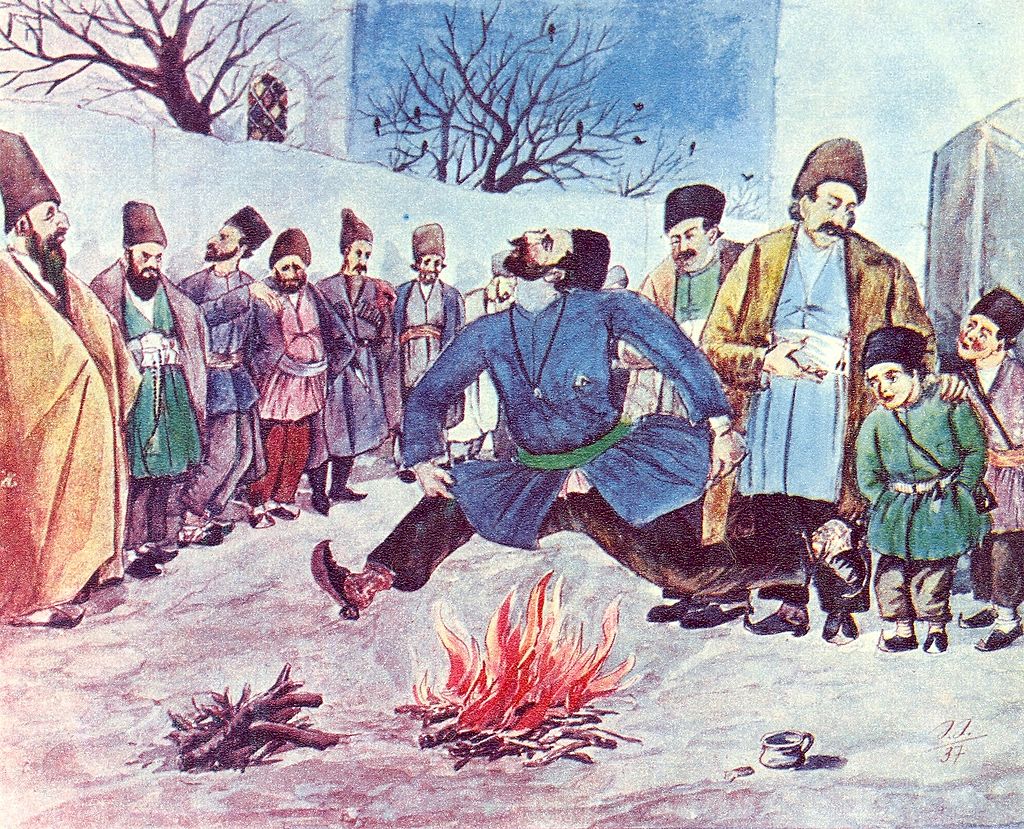 The Iranian government clearly discourages people from this kind of activity due to the safety issues of fireworks going off in the wrong places and people getting third degree burns. None the less, this hasn’t dampened the local population’s spirit for the event and big parties are held all over the country to celebrate this night. In some places children will knock on neighbours’ doors to ask for candy – not too dissimilar from Halloween, I hear you say.

So Chahar Shanbeh Suri evening I willingly went along to a friend’s party and took a deep breath and jumped over the fire, forgoing the ceremonial sentence “zardi-ye man az to, sorkhi-ye to az man” – the literal translation is “my sickly yellow paleness is yours, your fiery red color is mine” – as my Persian skills still have the ferocity of a five year old. Iranian kebabs were served on a charcoal fire and we all had a fantastic night. Though, I may add people were keeping a keen eye on their kids running around with sparklers and fireworks in hand. (Breath)!

The ceremonial table spread of the Haft Sin is a truly Iranian phenomenon I often relate to the brides on their wedding day in the UK, “Something old something new something borrowed and something blue”. The Haft Sin kind of goes by the same logic, with 7 items layered out on a table beginning with S in Persian.

The Haft Sin items are: 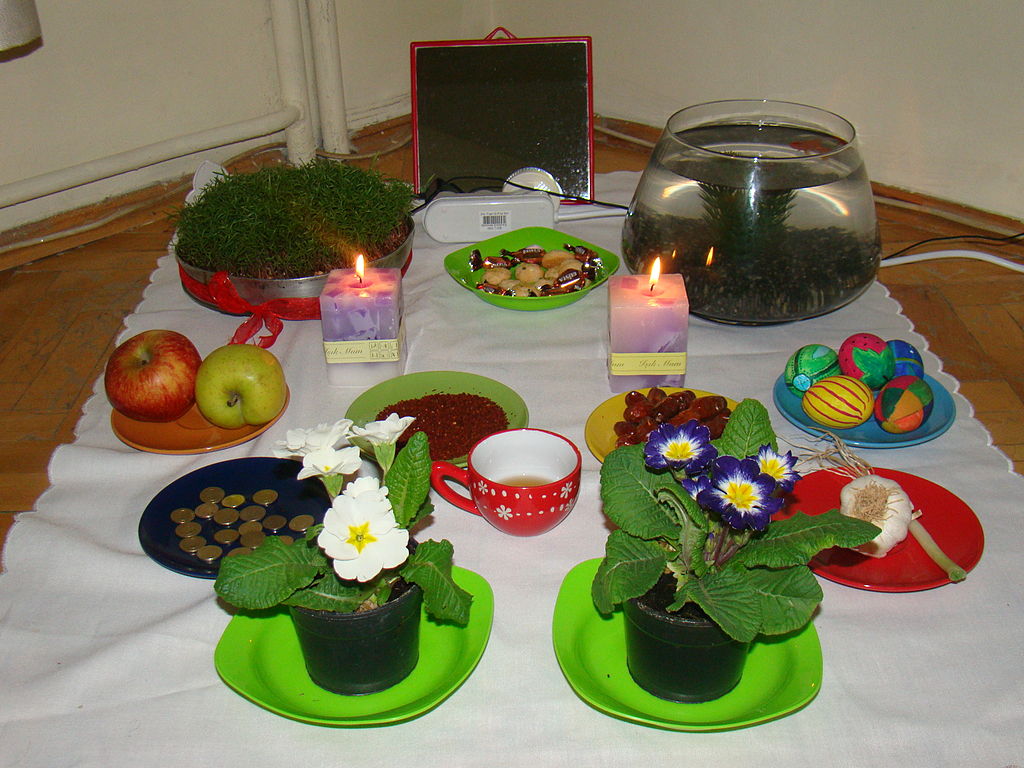 Now I may add that any self respecting Iranian anywhere in the world wouldn’t be seen without these at the New Year and for me it is a new and exciting experience.

There are variations on the list above but this seems to be the run of the mill table spread and it seems pretty interesting. I have to admit that one of my goldfish popped his clogs the other day, which fills me with such fear of foreboding for the next year!

The day of Nowruz is an interesting experience not to dissimilar to Christmas day in the Western World. You wake up early in the morning and greet other family members for a ceremonial dinner. Ours was kebabs, and I can say that I prefer this rather than turkey and gravy which I always experienced in the United Kingdom. People pass round a few presents and the elders of the family often give children cash or cash cheques. Iranian television makes a special effort to create special programming for this season and you will always see a few of the latest Hollywood blockbuster movies dubbed into Persian.

The two week holiday period in Iran is a strange event, especially if you live in one of the larger cities like Tehran. In usual times, people would either leave the city or even the country, however with the terrible state of the local economy many more people just stocked up on food and decided to sit this one out. I myself was included in this group as everything has become increasingly expensive, even villas in the north of the country have become pricey. 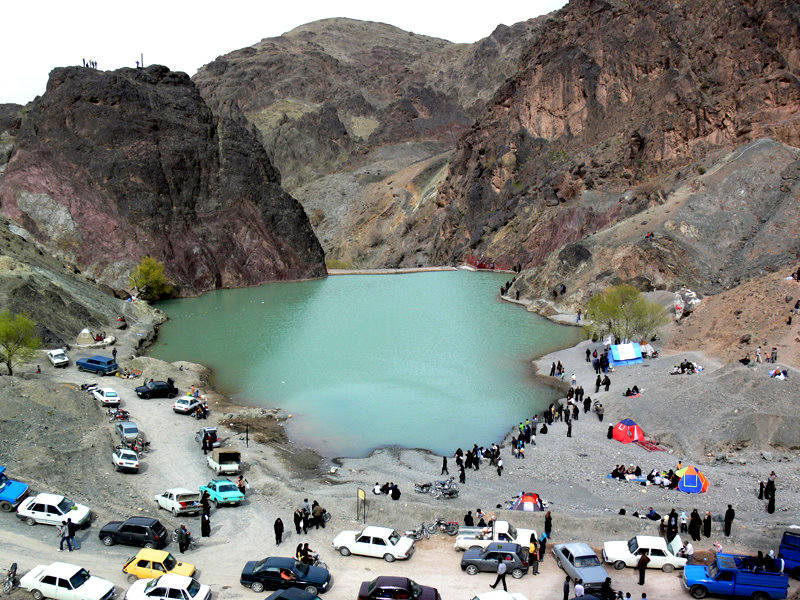 This is the 13th day of the Nowruz holiday period where it has been traditionally known to take your “sabz” or your grass which you grow in a pot to a stream somewhere away from your home.

This is the ceremonial time when people must spend the day out of their home. However, I noticed this year less people were bothering even to leave the residential areas.

Even though the Iranian official holiday lasts a sumptuous two week period, that seems not enough time to many people. Strangely, this phenomenon seems to permeate through much of the working culture here after the holiday period. People seem to have to drag themselves back to work. So in all actuality I seem to be having a three week holiday period as this week might as well be written off! So this was my first Iranian New Year and I look forward to many more!

All photos courtesy of Wikimedia Commons. Photo 4 by Adrianpour.