InterNations team member Eva recounts her story of visiting the Helsinki Community as well as a short day-trip to visit the InterNations Tallinn Community Ambassadors back in November. Read on for her impressions! 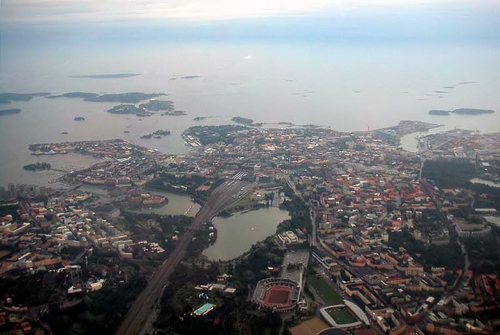 I was looking forward to this trip, as it would be my first time in Finland, and apart from a few days in Sweden, I had never been to Scandinavia before. I brought with me many of the clichés one has of cold, unfriendly Finland and silent distant Finns. However, during my trip I quickly learned the opposite: they are very friendly and open! It was easy to talk to them because they spoke English with an almost enviable perfection. Street signs and all other public inscriptions are usually written out in Finnish and Swedish, so I could use my basic knowledge of Swedish as well! Of course I also learned a few Finnish words!
It took me about half an hour to get into the city by bus from the airport, after which I had my own small Odyssey until I finally found my hotel! Luckily it is located right in the center, and the next morning I discovered it served an amazing breakfast!
After I checked in to the hotel and rested a bit, I wanted to eat something before going to this evening’s Helsinki November Event. As I expected the majority of Finnish cuisine consisted of fish, which I am not the biggest fan of, so I happily went to an Italian place! 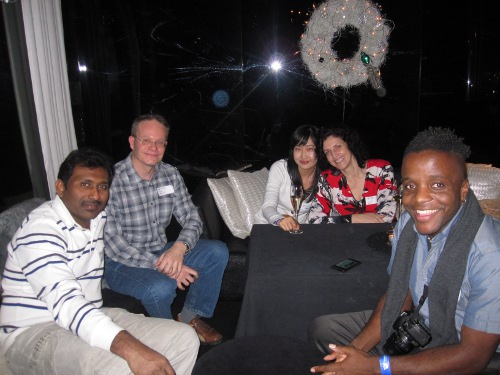 The event was our first ticketed Event in Helsinki and therefore I came over to support our Ambassadors and help our members understand the new concept and try to help in case there were questions or complaints, as there had been a few quite harsh ones when the event was originally posted.
The event started at 5:30pm, quite early for a German, but it seems that most of the people in Finland finish work at 5. The location was an exclusive members-only club – Bläk – which opened that night only for us. It had a very cozy and comfortable interior with many sofas, a karaoke room (indispensible in Finland) and a very beautiful view of the city. At around 5:45 pm people started arriving in groups. 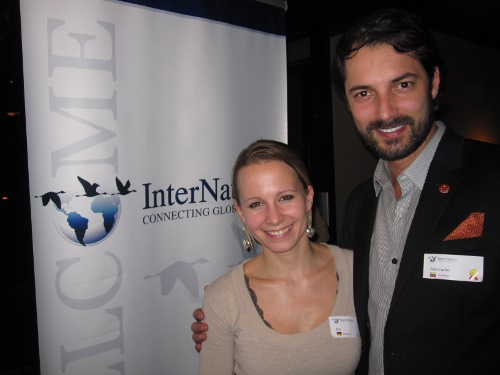 I soon realized that the Helsinki Community is quite an international mix, as I met people from Sweden, the US, the UK, Germany, Kenya, Bolivia, South Africa, China, Malaysia, Venezuela, Austria, Canada, Australia, and etc. The most important thing of course was that they were all incredibly nice! Everyone was very friendly, interested and open and it was so much fun – and easy – to talk to everyone. There was a feeling of belonging among the members, which is very important for a community but not always so easy to create. 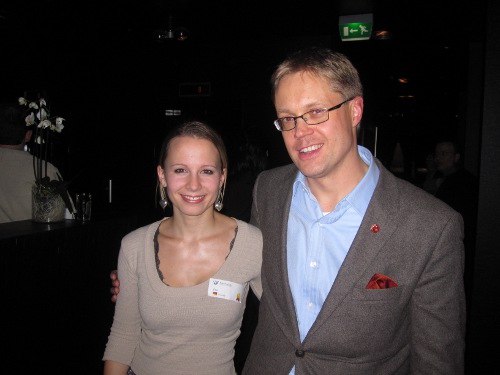 We had many newcomers and I’d say that the general age was between 30 and 40. In the end we had about 65 people who had a fun time networking, talking and enjoying the fantastic welcome drinks from Bläk (really good red and white wine, sparkling wine and others). I gave a short speech, thanking everyone for coming and encouraging everyone to ask me questions if they would like to know anything about InterNations, which many of them did in the course of the evening. I got at least 4 phone numbers from people saying that if I wanted to go out the next days, they would be delighted to show me their city and its nightlife! All in all it was a successful evening! 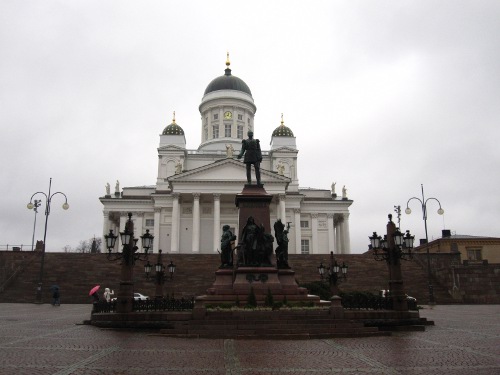 The following day I had a lunch date with my two Ambassadors, Simo from Finland and Jean Carlos from Venezuela. Before meeting up with them I walked around the city to do a bit of sightseeing. I went to the white dome, the symbol of the city, where I was almost crushed by a falling Christmas tree, which had just been erected a few hours before. I visited the famous market along the water in Kauppatori, and the town hall.
We met up for lunch at a very nice restaurant called “Sunn”, facing the dome. The food was very good and not very expensive, as I would have guessed (another cliché which is not true!). We talked about the Community, its future development, and the members’ concerns. After lunch Simo showed me the tourist office and gave me a few very useful tips on where to go and what to see. For example, there is a tram line that you can take, that goes around the whole city and gives you a nice overview about what is there to see. 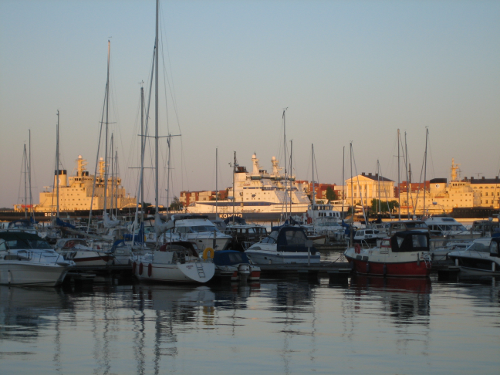 My business trip was officially over, but decided to stay a few days longer, since I do not often get the chance to visit Helsinki. I picked up my suitcase at the hotel and went to the apartment of my couch surfer, a Finnish student, at whose place I was planning on staying until Saturday. I had a lot of fun with her and got to know a few more sides of Helsinki I would have never seen without her. The marks of the Russian occupation are still quite visible, be it in statues, street names, art or buildings. I did not even know that Finland had had such close ties to Russia. There is also a wonderful Russian church on a small island near the port. The whole city is so small that you can walk everywhere in no time, but they also have a very good working tram system (absolutely punctual!). 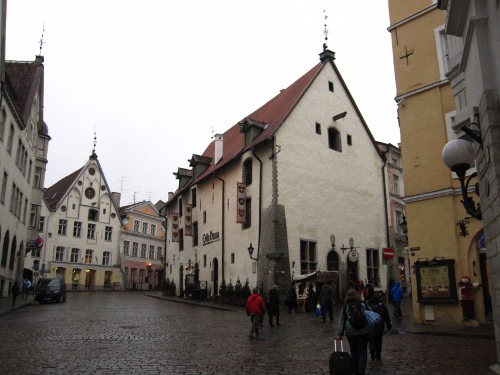 On Friday morning I took the ferry to Tallinn in Estonia to pay a quick visit to my two Ambassadors there. Since Tallinn is so close to Helsinki, I thought it would be a good opportunity to get to know them in person as well. The Finnish seem to be even more punctual than the Germans, as everyone was on board before the official departure time! Tallinn is a very beautiful little city with an old town that reminds one of the small medieval towns in Germany like Rothenburg, building from the 12th century and cozy little lanes with cobblestones. I really enjoyed it! The InterNations Tallinn Ambassador, Simon from England, gave me a detailed tour of the city. 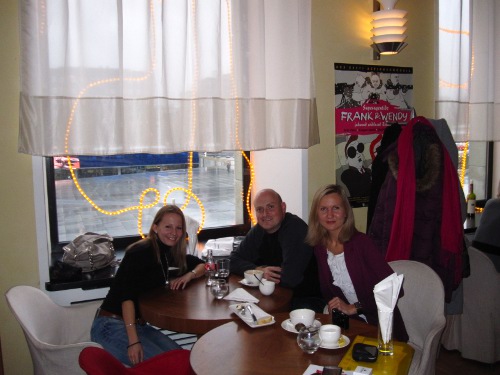 At noon we met up with the other Ambassador, Anna-Liisa from Tallinn, at the “Wabadus Café”, where the next InterNations Tallinn Event was going to take place. We had a very nice time talking about the Tallinn community, which has been growing very fast during the second part of 2011 and has a fantastic turnout at the events for such a small community. I learned that apparently the Estonians are much more advanced technically than in Germany: Simon told me that their ID works as a bank card, health insurance card, and many other things. He also explained the Estonian language to me, which seems to be one of the most difficult ones you could ever come up with to learn, even more difficult than Finnish! 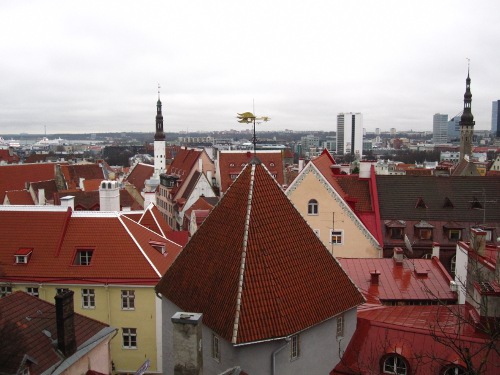 The trip as a whole was quite interesting. It was my first visit to a Community and I got to know the Ambassadors in person, and was able to see how the Events and the general organization of them work abroad. I also met many nice people in the Community and really enjoyed the Event. The Ambassadors really did their best in making me feel comfortable and organized a great event! I will definitely soon have to come back to these fascinating cities and countries!