InterNations co-founder Malte Zeeck was back in action, this time visiting the InterNations Kiev Community’s October Event! Read on as he recalls the Event and his tour of the city the next day. 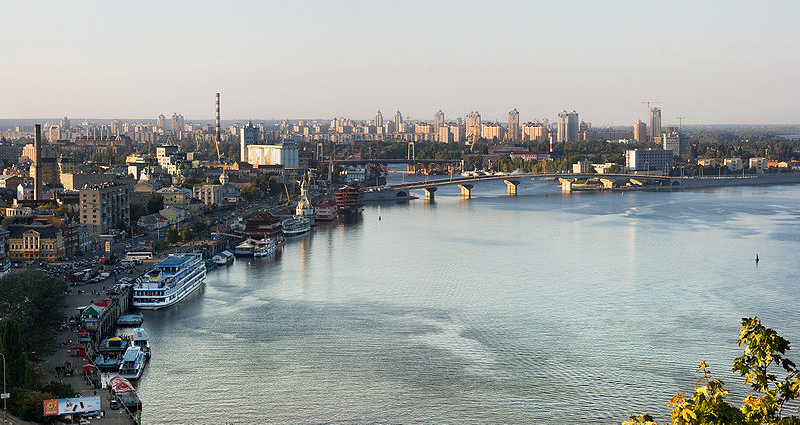 I arrived at Borispol Airport on Friday with a two hour delay, which slightly let my mood sour up a bit. The forty minute taxi ride to my hotel didn’t help matters much. However I was in luck, as our Kiev Ambassador, Oguzhan Guler from Turkey, booked me a room in the same hotel where the event was to take place, so I didn’t have far to go!

I was twenty minutes late to join the Kiev October Event at Shooters Café in the Impressa Hotel. Around 80 members from more than 20 different nationalities signed up for the event – it was going to be a good night!
Oguzhan lived in Moscow before and organizes events for a living, so he was tip top at welcoming the members and myself and offering us some sort of tasty punch. Members I was able to chat with, included Germans working for the embassy, a professor from Egypt who teaches at the university, French, Swedes, Italians, Brits, Americans, and of course a few locals who lived abroad before. 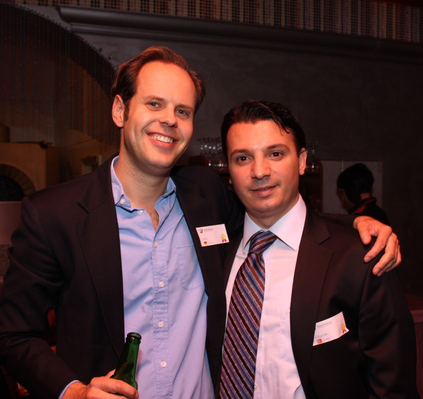 As it wasn’t a huge party with hundreds of members, but more of an intimate little group, it was easier for members to get to know one another and chat. Oguzhan was nice enough to give a little welcome speech for me and officially introduce me to the InterNations Community in Kiev and I was happy to say a few words and thank him and Co-Ambassador John Jones, for their involvement in the Community. Unfortunately John, who is originally from the United States, was unable to make it due to a last-minute business trip to Kazakhstan. After the introduction and once everyone had a glass of something or other in hand, there was a small raffle in which five lucky members won two tickets to attend the musical “Madagascar”, which will be in town soon. 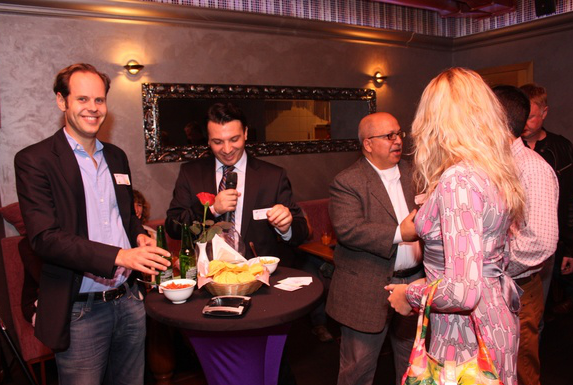 Since the event took place on a Friday, people stayed longer because there was no need to get up early for work the next day! Thus there were lengthy discussions about things to do and see in Kiev, about InterNations in other cities, as a few of the members have attended events elsewhere, and about the latest politics in Kiev. 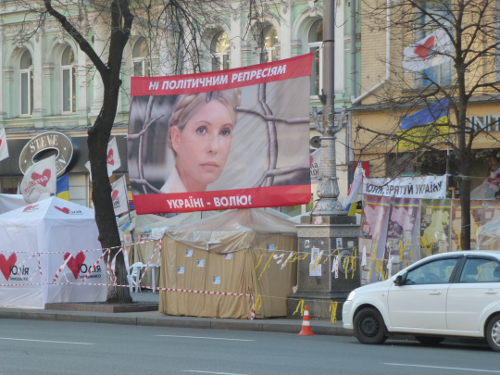 Of course, now that former Prime Minister Yulia Timoshenko is in jail, conversation revolved around the Ukrainian people’s opinion of her and how the situation is being portrayed so differently in the international press. There were even a few protesters outside on the street, arguing for her release from jail, which many Ukrainians think she deserved and believe that these protesters were being paid to protest. 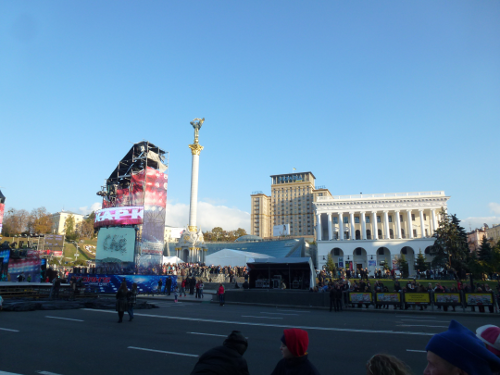 After the last people straggled out and the Café closed, I joined a few members to go to an Irish pub called Dockers. We later moved on to the Vodka Bar, which is right on Independence Square, the main square in Kiev and the place where the Orange Revolution took place in November 2004. True to Ukrainian party style, we visited a few more nightclubs that evening whose names were all written in Cyrillic so I was neither able to read nor understand them! 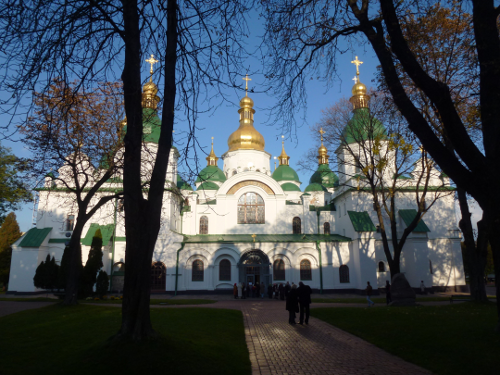 The following day, I met Oguzhan for lunch to talk about the future of the Kiev Community and then he showed me the city. I expected Kiev in October to be cold, grey, and dreary, with stereotypical
Soviet-style high-rise buildings. In reality it was gorgeous: mild temperatures, plenty of sunshine, a beautiful historic center with a view of the St. Michael’s Monastery and St. Andrew’s Church, and the Dnieper River. 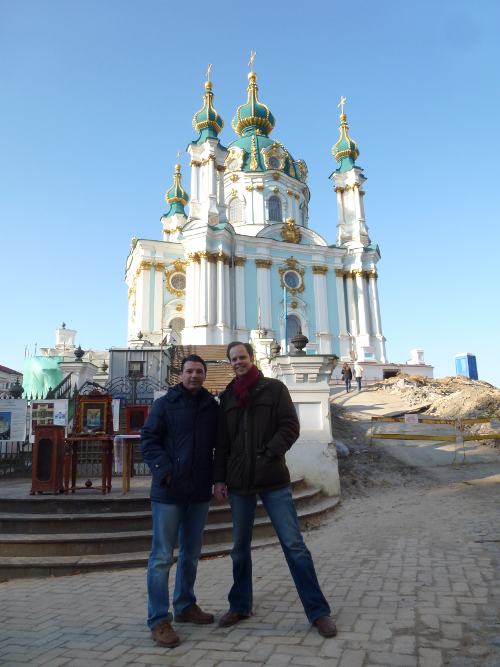 We took a long walk, passing by most of the major sights. The city has a great atmosphere, much smaller and less crowded than Moscow, where I last set foot in this part of Europe.
There is also an unusually high quota of women in Kiev, which was noticeable not only during the day by the construction workers and other manual laborers that were female, but also when we went out that same night. All the bars and clubs were predominantly filled with groups of women. We went to the Mantra Club in Arena City, a venue where Oguzhan hosted a few events before, and later we stopped by the Mai Tai, a Hawaiian restaurant-bar-disco chain from the United States, which recently opened in Kiev.
All in all, I can say that Kiev is a city which is definitely worth visiting again, especially in summer when people sit outside and relax along the river banks of Dnieper.