Pierrick from Paris is a sort of travelling salesman who is passionate about coffee. He tells us about the different coffee drinking rituals he has discovered on his trips and let us know which his favorite was.

I had always wanted a job that let me travel and when I joined the company I now work for I realized I had found my dream job! My life suddenly became incredibly colorful: new smells and tastes and views became the norm for me and I never tired of discovering something new. 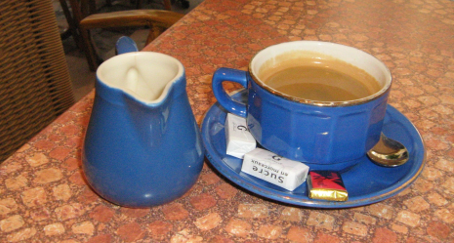 One of my favorite past times, aside from traveling is drinking coffee. I am French and we do love our coffee! I always begin the day with a large café au lait and end it with a café calva, yet I am not so snobby as not to accept some other sort of coffee drink. Especially travelling around the world was I able to taste the most varying types of coffees and partake in the most random and intricate of coffee-drinking ceremonies – for drinking coffee to me does have something spiritual about it.

Since I have been able to enjoy coffee in dozens of countries worldwide – from Indonesia to Turkey to Canada – I will limit my story to three of my favorite and most memorable coffee experiences. 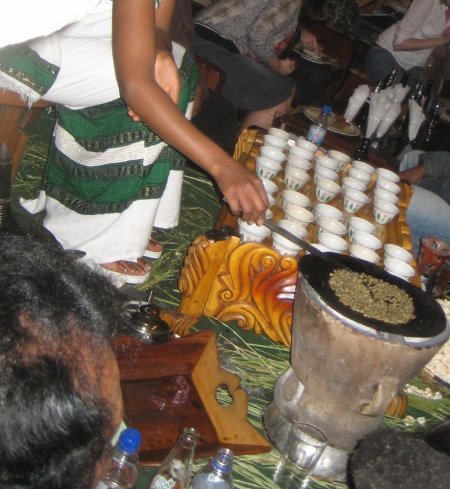 One of my first business trips took me to Ethiopia, where I was fortunate enough to partake in a ritualistic coffee ceremony. Now everyone has heard of the Ethiopian coffee bean: rich in flavor and dark in color. I was invited to the home of my Ethiopian business partner where his wife prepared a coffee ceremony: she brought the washed coffee beans and roasted them in a special pan on a small fire outside their house. After the coffee beans were roasted we moved inside and the amazing aroma of roasted coffee filled the room. She then began to grind them in a mukecha, a traditional Ethiopian coffee grinder, sort of like a mortar and pestle, and ground the freshly roasted beans. The ground coffee is then filled into a clay pot with water and set to boil over the charcoal grill from the roasting. When it is done, I was served the most exquisite coffee I have ever experienced! Interesting was also that each serving of coffee is so important in Ethiopia that each has a name, if I remember correctly, “Abol” is the first serving. 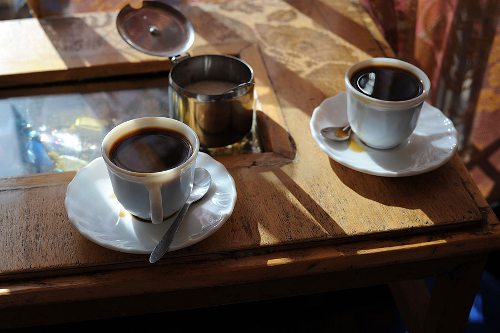 One of my other business trips took me to Ecuador, where, on a weekend trip, I was able to visit a coffee farm. That was quite a treat, as I was able to tag along into the fields and help pick the cherries. It was the coffee plantation of a friend of a friend, so I guess I was a privileged guest on this organic farm. After watching how the coffee was processed, Pablo asked me to have a cafecito with him and some of his workers on the veranda of his huge hacienda home. As we talked about business, family and life in general, I realized that coffee does in a way bond people and somehow enables the removal of certain social distinctions. 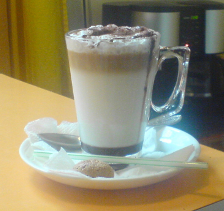 In another, more unlikely place, where I had a delicious coffee and where I discovered coffee was a sort of tradition there too, was in Vermont in the United States. I wasn’t there on business this time, but was visiting a friend in Montreal and decided to take a trip to Burlington which everyone always claimed to be so beautiful. It was in fact very nice and I quite enjoyed my one-day stay. What I discovered whilst I was there was that regardless of how cold it was, people ran to all the different coffee shops on their pedestrian zone and sat in the few chill sun rays that the November sky offered. I decided to try a coffee at a little tiny shop which attracted my attention thanks to its large original coffee roaster in the window. I asked the barista what he could recommend to a Frenchman, which promptly resulted in a white mocha something or other. I am normally against flavored coffees with chocolates or nuts in them, but this was absolutely amazing. Sitting outside huddled in a blanket and watching the passers-by, I realized that maybe American coffee isn’t so bad after all…

So I guess the realization that I came to is that coffee is fantastic everywhere you go and that everyone has their own way of preparing and enjoying it! It is one of the things that many cultures have in common, and even if it is tea they prepare, it is much the same ritual.