Ludmilla from Poland tells us a story about her experience in a Shanghai market. She joined her husband Jerzy whose company sent him on a 2-year expat assignment and is looking forward to exploring other curious aspects of this fascinating city.

As Jerzy had to begin working immediately after we arrived, I was left to my own devices for the first week in Shanghai. Originally I am from a small village outside of Krakow, and I was quite overwhelmed by how huge Shanghai is, and busy! There are people everywhere! And cars! And bikes!
When we told our friends and families in Poland that we were moving to Shanghai for a few years, everyone immediately began telling us of the “weird food” they eat there, my sister even went online and printed a list of foods typical to the region. I must say, some of these delicacies frightened me, but I decided that I would check out the food markets anyway. Perhaps they taste better than they look! 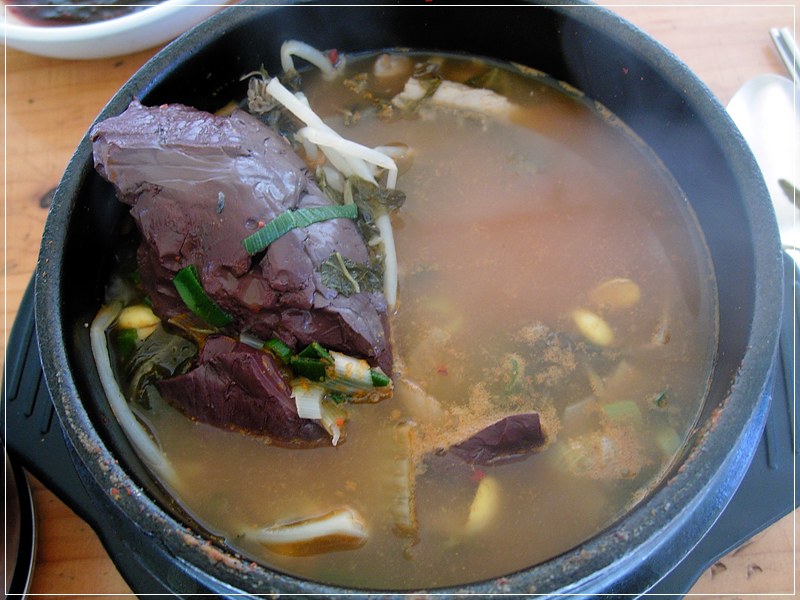 So off I went to a market on the corner of Taiyuan and Jianguo roads. It was loud, colorful and tickled my nose. I was determined to try something unusual! Seafood, insects, reptiles, unidentifiable parts of chickens, ducks, cows and pigs were lined up along with colorful spices and exotic looking fruits and vegetables. I wasn’t quite sure where to begin so I just browsed the aisle a bit and let the smells and noise wash over me. There was a large group of what looked like tourists huddled around a stand eating something in little bowls. I decided to see what was going on there. I was shortly informed that they were trying duck blood soup, and duck heads. Okay then… A small bowl containing clear soup with some parsley and chunks of what looked like liver was handed to me. I sniffed the aroma wafting from the bowl and was immediately greeted by a strong iron smell – blood. Sipping the spoon I discovered that it actually tasted similar to Polish czernina, which is also duck blood soup. 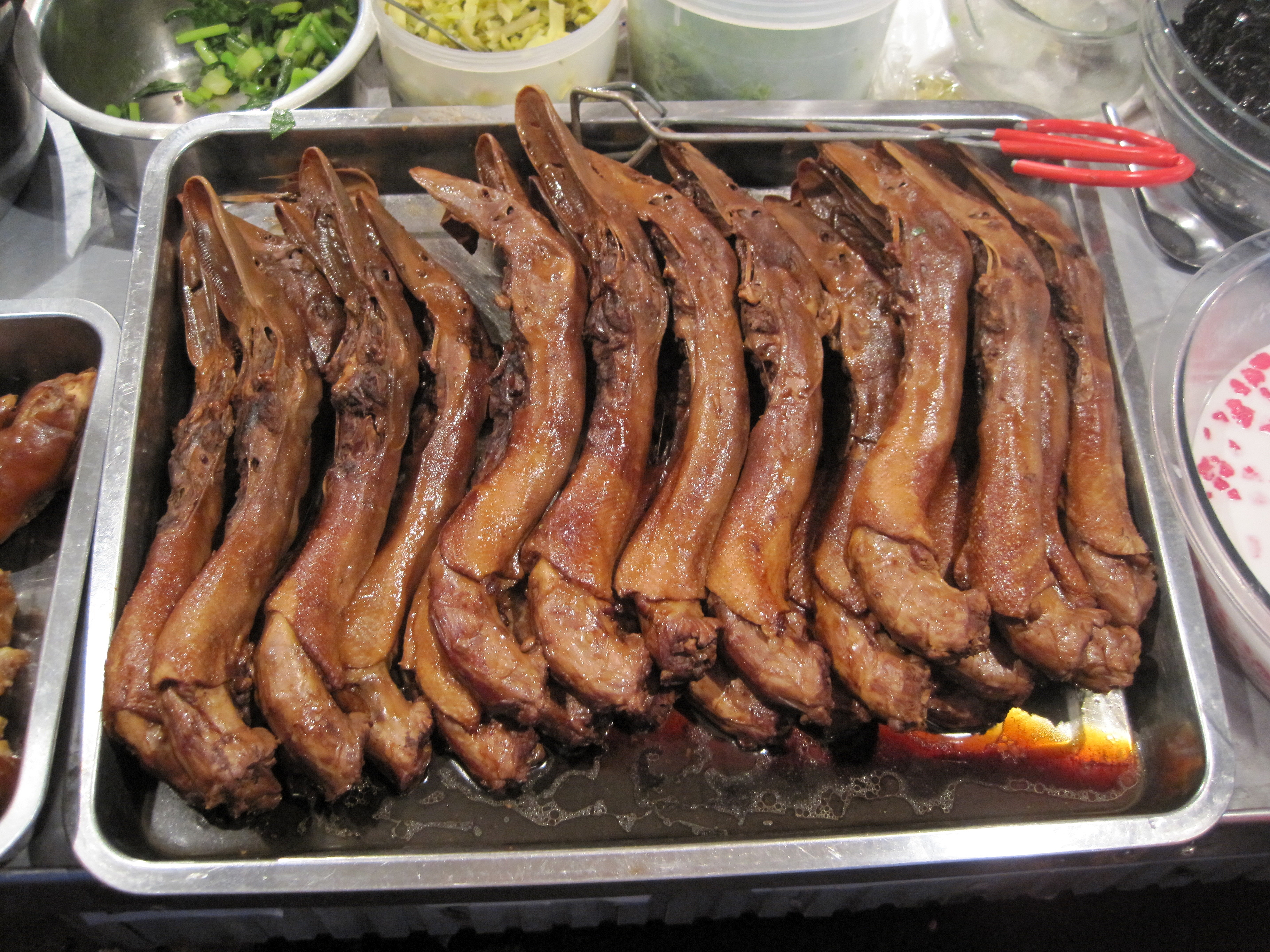 Upon seeing my enthusiasm for this soup, the vendor quickly shoveled some duck’s heads onto a little plate and handed them to me… ok, no problem I just spooned the animal’s blood into my mouth, now I can try the head. Duck’s head I found out later, is considered healthy in China and is believed to enhance your brain power. Again I surprised myself by liking it! Although it was a bit spicy, it had a nice flavor to it. Thanking the vendor I moved on to another stand a few feet over and quickly recoiled at the sight of his goods: slimy looking worms and other odd looking sea creatures. I don’t think I was going to try anything there… I did manage to ask what those little worms were though and a young woman next to me explained that they were sea worms which are fried and served with leeks and garlic. Hm, interesting! 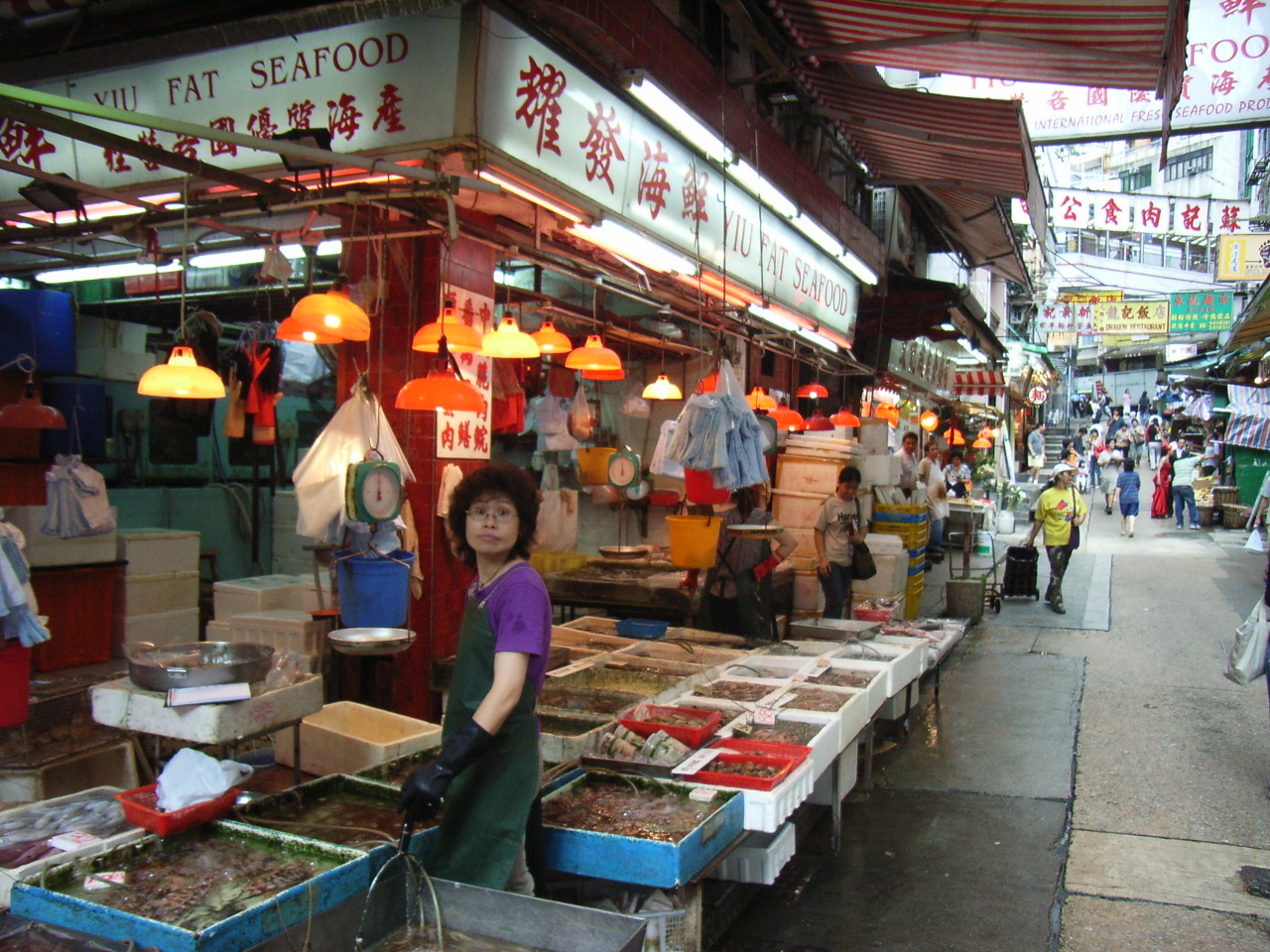 Continuing on my journey towards the exit of the market I was accosted by a young man who had apparently been watching me try the duck specialties and wanted to show me the things at his stand. I agreed, hoping there would be no strange insects awaiting me. As fate would have it I ended up standing in front of heaps of fried, roasted and breaded insects. I tried to convince the man that I was full and couldn’t possibly have another grasshopper, when he handed me a small bag full of what looked like bees. And that they were: honeybees deep fried in salt and pepper. The young man was so eager to see me try them that I squeezed my eyes shut and popped one in my mouth. Crunchy. And again, tasty! A bit salty and yet sweet, reminded me of a Polish dessert! I ended up buying a bag for Jerzy to try, hoping he would be as enthusiastic about them as me!

Although I didn’t end up trying much that day, duck specialties followed by a dessert of honeybees was quite enough for one day! I’m looking forward to exploring and tasting more animals and plants of which I was unaware one could even make dishes out of!