InterNations co-founder, Malte Zeeck, tells us about his last stop on his Latin American tour, visiting the InterNations São Paulo Expat Community and checking out the city! 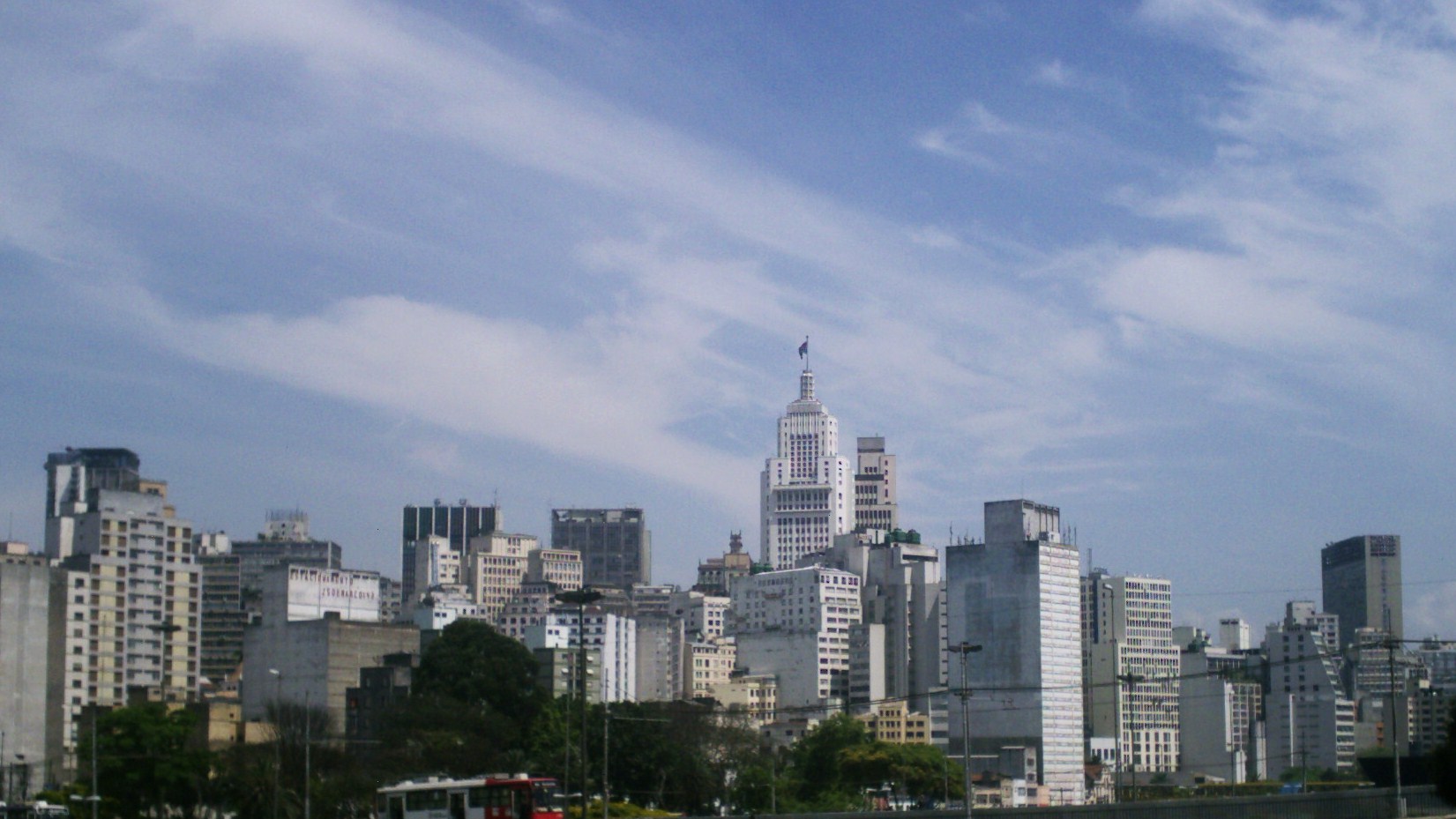 São Paulo is a huge sequence of apartment blocks, office buildings and other skyscrapers – the city never really seems to end. With a population of more than 12 million in the city, and around 3,500 members, São Paulo is not only the largest city in Brazil, but also our biggest InterNations community in South America. No wonder, being the commercial hub of Latin America, the city where the most international corporations are based, and thus, also the most expats. São Paulo is not at beautiful as Rio de Janeiro, although it has a nice historic center with a few monuments and the Ibirapuera Park. São Paulo has its own intriguing charm!

Upon arrival, I wandered through the city just the way I did when I used to live here eleven years ago. I stayed close to the Avenida Paulista, the banking mile of São Paulo, which is the heart of the city, boasting its tallest skyscrapers. Here is where all the stressed out businesspeople rush about through the streets from one block to the next.
I passed the MASP, the Museum of Art São Paulo, a dated “modern” building, and, where the Avenida 9 de Julho, significant for its date, the 9th of July, for the Constitutionalist Revolution of 1932, crosses the Avenida Paulista, I reached the university I studied at many years ago, the Fundação Getulio Vargas, the business school of Brazil. I remember the Friday afternoons when the university cafeteria served free beer to the students … ahh, the good old days 🙂

I walked by the house where I once used to live and by the most famous Samba School of São Paulo, the Vai Vai where the Paulistas, residents of São Paulo, prepare themselves for carnival. I hopped on a bus to go down to the historic center with its cathedral at the Praça da Sé, the plaza that is considered the center of town, the Theatro Municipal and the São Bento convent. The city is very alive here and to get a good overview I walked to the Praca da Republica to climb the Edificio Italia. At the top, on floor 42, there is the Terraço Itália, a bar and restaurant with the most spectacular views of the city center. We had an InterNations Event here once and I understand why that particular Event was so popular. 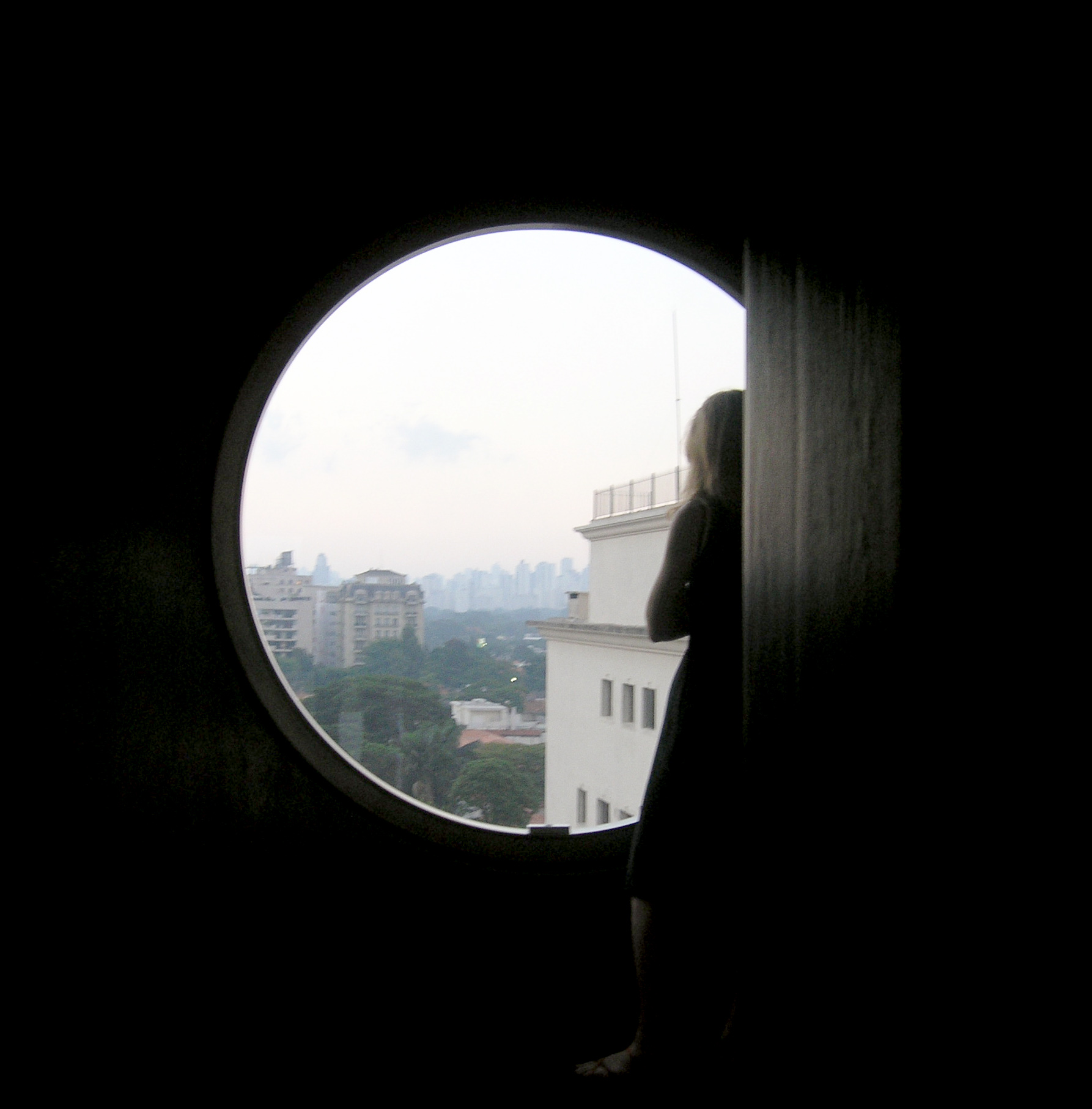 Later, as the sun began to set, I met a few old friends to have some caipifrutas, a variation of the famous caipirinha with fruits instead of lime. I can only recommend it with strawberry, pineapple, kiwi or passion fruit. They’re delicious and not as sour!
We went to the Hotel Unique which hosts the Skye Bar & Restaurant on its top floor and once again we got a great view of the city’s ocean of skyscrapers. Manhattan seems tiny against this massive wall of concrete blocks and its thousands of lights, which São Paulo has to offer. São Paulo and Brazil in particular became very expensive over the last few years, which is quite a striking development. The economy is booming, former president Lula has been successful in fighting poverty and hunger. He supported many favelas (shantytowns) by building a proper sewage system and electricity network, which resulted in a large middle class. The price of almost everything rose significantly, so much so that Argentina appears to be the poor neighbor where you can go on a cheap shopping trip. 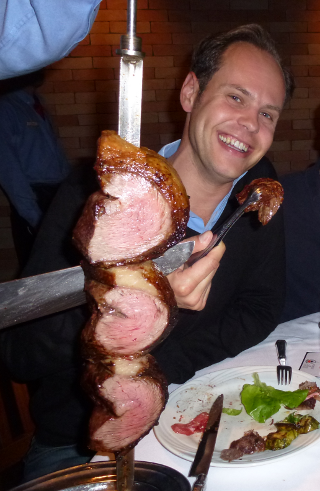 The highlight however was the trip to a churrascaria, a Brazilian steakhouse. We chose Fogo de Chao and were definitely not disappointed. Those all-you-can-eat meat temples serve you all sorts of foods like salad, pasta, pizza and even sushi. But don’t make the mistake of going for all the stuffing food – just wait for the meat!
The waiters will come to your table with freshly grilled skewers with the finest meat that Brazil has to offer. They come by as many times as you wish, until you flip a little disc on your table to red. This is called rodizio, fine Brazilian tableside service. I felt like I was in paradise when the waiters brought me the finest picanha (an excellent cut of top sirloin), filet mignon, and 30 other types of beef. I tried them all and only passed on the little chicken hearts. With a good glass of wine, the time passed by, and old stories were retold and new ones created.

After the feast we decided to drive down to Vila Madalena, an upper middle class neighborhood with many little bars and clubs, and went dancing to samba music at O Dogorogodo. With a couple Bohemia beer and a few pinga it is much easier to follow the rhythms of the little band! São Paulo is really all about the nightlife. There are so many bars and clubs here that you can go out every single day of the week and end up in a different locale each time, you just can’t get bored! That is why I decided to have one last drink at the Dorothy Parker Club in the wealthy Jardins quarter, where the rich and beautiful go out in São Paulo and where you feel like you’re sitting in a club in London or New York. 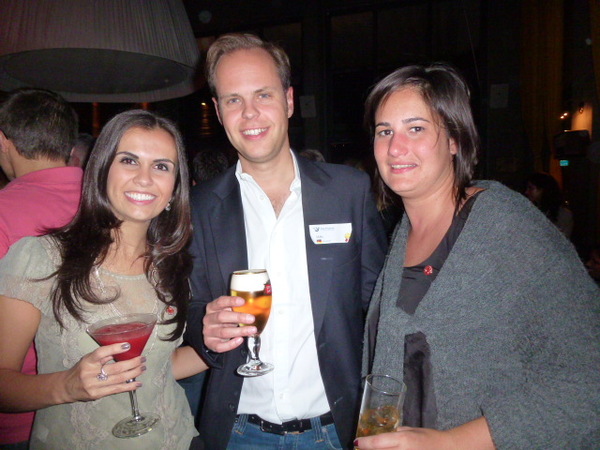 The next day was the May InterNations São Paulo Event which took place at the Radio Café a very popular bar in Jardins. There were more than 250 members on the guest list and it turned out to be the biggest Event that I got to visit on my South America trip by far. People just did not seem to stop coming in, and the two local Ambassadors, Mariana Barros and Kelly França who both work as intercultural trainers for their own company Differänce, made sure that all members felt welcome at the get-together. I got to meet people from the Netherlands, from the States, there was Montserrat from Spain who told me that she met her husband, Sebastian from Argentina, at an InterNations event in New York City, there were members from Italy, Japan, our Ambassador Maria from Mexico City, and many, many more!

This is São Paulo, a truly international city and it is somewhat sad that it was my last stop on my tour through South America. As there are quite a few more communities to visit in Latin America, such as in Bogota, Quito, or Lima, I am sure I’ll be back soon…