InterNations co-founder Malte Zeeck relays his thoughts and impressions from his visit to the Côte d’Azur and Monaco to attend the events planned by the Communities in Nice and Monte Carlo.

The south of France is definitely one of the nicest regions to visit in Europe! The sun, the palm trees, and the smell of the ocean which I breathed in as I got off the plane at the Nice Côte d’Azur Airport were not needed to make me aware of that. With my French rental car I drove down the highway to Cannes, the city of the famous film festival, to meet our two Côte d’Azur Ambassadors Gudrun Bjarnadottir and Celine Monier for lunch.

At the beautiful Promenade de la Croisette, the beach esplanade where movie stars stroll by, we sat down at the Plage Miramar restaurant for a refreshing glass of white wine and a tasty salad. We discussed the future of the InterNations Côte d’Azur Community and planned on creating future communities in cities like Marseille, Montpellier, Toulouse, and Bordeaux, and even thought about splitting the Côte d’Azur Community as it covers Nice as well as Cannes, Antibes, Sophia Antipolis and St. Tropez. 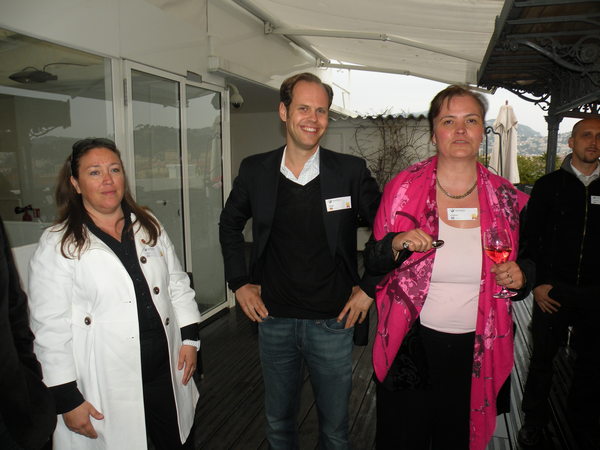 Gudrun, originally from Iceland, has been living in the South of France for about 20 years. As she works in the real estate sector, she knows all about buying houses and the rich and famous. Celine is French, originally from Bordeaux and consults in a similar area. Both of them have been organizing events for a long time and take turns in the different cities that the Côte d’Azur area covers.

After lunch I had to hurry to Monte Carlo so I wouldn’t be late for our Monaco April InterNations Event. I drove over to La Turbie, a picturesque village overlooking Monaco, where I checked into a quaint hotel, the Hostellerie Jerome. There was not much time to wander through the little streets of the village as I had to get to Monte Carlo. As the Monaco Formula 1 Grand Prix is just a few weeks away, the streets have already been newly tarred and I was able to test the curves as I drove down the actual Formula 1 Course which leads directly through the city and past the port.

Unfortunately there were many other cars on the road and the rented Citroen is not made for racing! I arrived just in time at the crem, the Club des Residents Etrangers de Monaco, a very upscale private club which opened its doors exclusively for InterNations members tonight. The manager warmly welcomed our Monaco Ambassador, Ina Zellweger, and myself; unfortunately the other Monaco Ambassador Garance Barault was sick in bed. 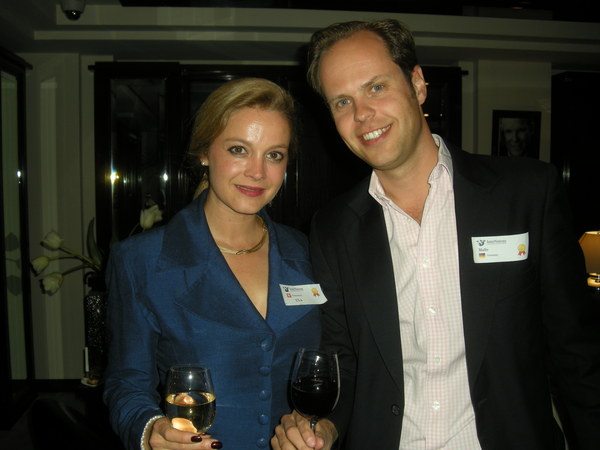 Ina organized a great deal for our members: finger food and an open bar of wine and champagne await us. The arriving members are dressed elegantly and primarily work in the finance sector, the boating business, fashion, and art. With a glass of champagne in hand I was happy to say a few words about the InterNations vision to the 50 members who came to spend the night together. I was also able to thank Ina for all her hard work of organizing great get-togethers for the Community. Ina is originally from Switzerland, lived in Paris for quite some time, and is now happy to be in the social center of the Monaco Expat Community as she enjoys helping people who have just arrived in town.
After crem closed, many of the members went on to a neighboring bar to continue with a few more glasses of wine and champagne. This Community really has a family feeling to it, which is a great experience!

The next day I met up with Ina, Garance and Brigitte at the Quai des Artistes, a restaurant just by the port. Garance, a French native, just had a son and runs her own relocation service company. Although not an Ambassador herself, Brigitte, who is originally from Germany, frequently helps the Ambassador Team organize events and answering member’s questions on the platform. They are all happy that the InterNations Monaco Expat Community is developing so well and like the idea of aligning the monthly events with the ones of the neighboring Côte d’Azur Community, so that members can enjoy two events per month. 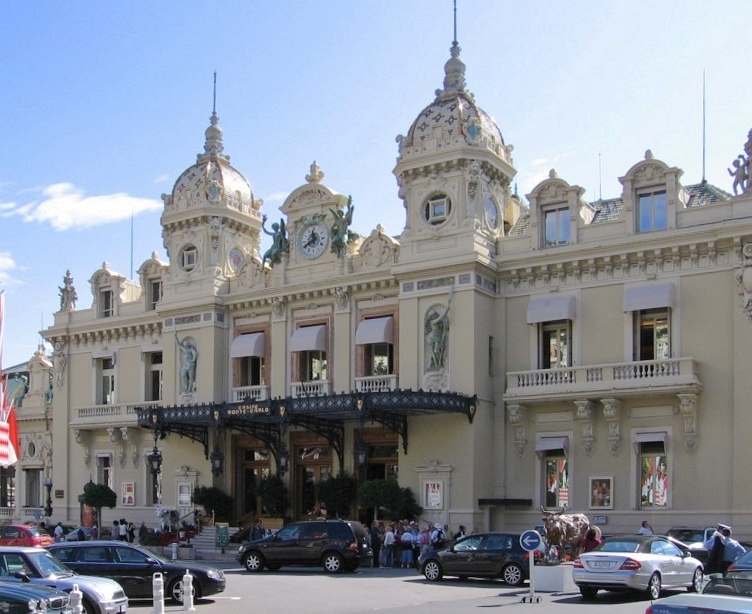 After lunch, I got to check out a few more locations for upcoming events with Ina all the while passing by the major sights of Monaco, such as the palace of the reigning Grimaldi family, or the famous casino with all the fancy cars in front of it.

Then I had to head over to Nice, as our Côte d’Azur Community Event was to start soon. Driving the serpentines along the coast line I had to think of Grace Kelly, the famous actress and Princess of Monaco (from 1956-1982), who lost her life in one of these sharp curves in a tragic car accident. Therefore I took to the curves a bit more cautiously and still managed to arrive at the Boscolo Plaza Hotel on time. 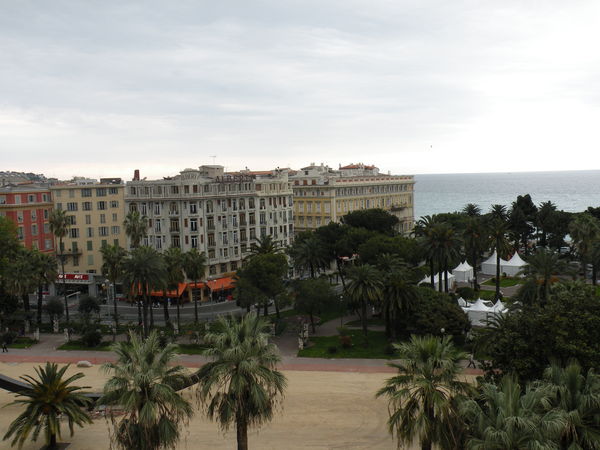 Our event took place on the rooftop terrace overlooking the city of Nice and the oceanfront. It was a breathtaking view. It was a bit chillier on Friday night than at the Monaco Event, and sadly began raining, which caused me to worry that members wouldn’t be willing to come out and have a glass of wine with the Community. But the evening turned out to be a complete success, with more than 60 people turning up. I even saw a few familiar faces from the Monaco Event. There was an interesting age range from 21 to 65, and as always members came from all over the world. The outdoor heaters, which the hotel installed for us were not needed for long, as everybody was crowding around the bar, keeping each other warm while talking about the advantages of living on the French Riviera. A few members were even interested in organizing regular events for Nice alone, so that we might have a few monthly get-togethers in this area in the very near future.

I got to stay on in the Côte d’Azur through the weekend and relax a little bit and was happy to see that the sun came back out! I stayed in the magnificent little town of Cap d’Ail with friends from my university. We were able to enjoy the ocean at the charming little Mala Beach, where we had a drink during sundown watching smaller boats dock. At night we went out for dinner to one of the in-spots of Monte Carlo: the Sass Café and Piano Bar. Here is where the rich and beautiful come out and mingle, those who have their Ferraris and Lamborghinis parked outside, or temporarily live on one of the huge yachts in the bay around the corner. Later, the restaurant turned into a bar with loud music and people began dancing on the tables. 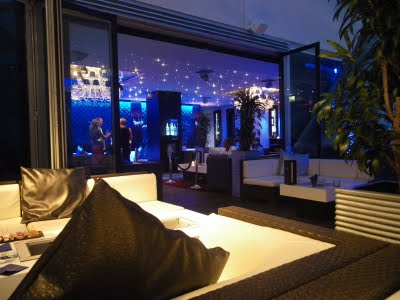 We had a few drinks amidst the rich and the wannabe-rich before we headed over to Zelo’s, just across the street and one of Monte Carlo’s most prestigious night clubs overlooking the waterfront. People were dressed in the latest fashion and danced the night away. The DJ played the beginning of the Star Wars anthem every time a guest ordered one of the Magnum bottles of champagne – I can assure you that we got to hear this song quite a few times that night! Unfortunately, the caravan of stylish waitresses with the champagne cooler, glasses and the fireworks always seemed to be heading to a different table…

I have to say, the weekend has given me quite a good impression of life on the Côte d’Azur and I can assure you, it is not one of the worst places to visit or live… This truly is la vie en rose!