As we recently promised, we do have an exciting announcement to make this week: the first batch of new Local Communities is now online! It’s been a busy few weeks here at the InterNations headquarters in Munich, but now it’s done. For the first time since InterNations went online in 2007, we have added a number of new Local Communities to our network.

These 17 expat hotspots include namely Bodrum (Turkey), Bologna (Italy), Calgary (Canada), Denver (USA), Gothenburg and Malmö (Sweden), Heidelberg, Regensburg and Stuttgart (Germany), Lugano (Switzerland), Lviv (Ukraine), Manchester (UK), Ras al-Khaimah (UAE), and Valencia (Spain). On top of that, we also split the former Rhineland Community in Germany into three separate Local Communities: Bonn, Cologne, and Duesseldorf. Most of these new InterNations Communities have been active local groups before becoming a Local Community, for example, Malmö and Gothenburg, our additions to InterNations in Scandinavia.

Although Malmö, one of Sweden’s southernmost cities, is less than 30 kilometres from neighbouring Copenhagen, we decided that it was high time for the Malmö members to get their own community. After all, it’s not only the third-largest place in the country and a lively university town, but also the Swedish city with the highest number of non-Swedish residents.

In addition to numerous immigrants from the Middle East, Eastern Europe, former Yugoslavia, Turkey, and Denmark, Malmö has a sizable expat population, too. Once Sweden’s most industrialized town, it is now making an effort to overcome its post-industrial slump and build a new reputation as a centre for arts, education, and the service sector — which attracts quite a few foreign employees, too.

Looking after the InterNations members in town are our three new Malmö Ambassadors: Adriana Killinger, an HR specialist from Buenos Aires, who’s been living in Skane for almost ten years; Dina Sultanova from Russia, who is now employed at Malmö University, and Caroline Yazi, a Swedish citizen born in Germany into a truly international family with roots in Sweden, Finland, and Algeria. Together, they have already planned an upcoming get-together for April. At the last event, they managed to gather guests from over a dozen different countries. These are not quite all the 170 nationalities represented among Malmö’s populace, but maybe they’ll be getting there soon!

Gothenburg, on the other hand, is Sweden’s most important port town and indeed one of the busiest commerce and trade locations in all of Scandinavia. 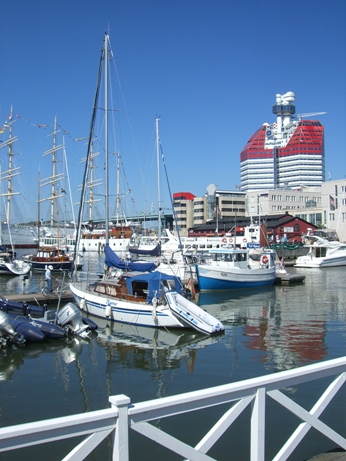 But the city isn’t only famous for its historical harbour: automobile fans may also know that the Volvo production plant is located here. In recent years, however, Gothenburg has expanded its high-tech industries as well as its banking and finance sector. Again, this explains why expatriates are flocking to Sweden’s second-largest town, adding to Gothenburg’s sizable foreign-born population. Hans Hirschi from Switzerland, a cross-cultural communications expert with a penchant for international travel and boating, will be representing InterNations as the local Ambassador. His next event is scheduled for April.