It was indeed this popular Christmas hit that happened to be on the radio when all team members were crammed into the back of a rental mini-bus, heading for the Tegernsee, a lake resort and popular recreation area in the Bavarian Alps. The weather gods, however, didn’t need any extra encouragement. It had been snowing all over Germany for the past few days, and many a nervous driver on the motorway south seemed to be less than excited about the current road conditions. 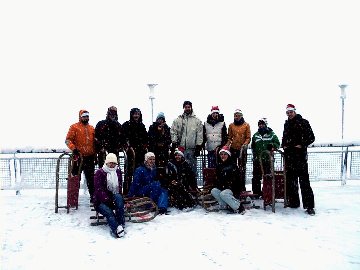 Despite the continuous snowfall, we did make it to the Wallberg more or less on time. With a height of 1,700 metres, this mountain may be a mere dwarf compared to other peaks and ranges in the Alps, but it does boast the distinct advantage of featuring Germany’s longest toboggan run. As soon as we had reached the summit via the gondola lift and warmed up a little with a cup of mulled wine from the panorama restaurant, we grabbed our sledges, and down we went.

Everyone who might have thought that such an activity was for kids only was quickly disabused of that notion. The first part of the ride was indeed a bit of an adventure, due to the strong wind and the dense flurry of snow-flakes blurring our sight. Sometimes, it was even difficult to spot where the piste ended and the steep slopes down the mountain began. 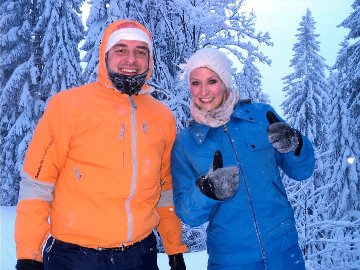 But in contrast to some anxious or black-humoured predictions, nobody ended up at the bottom of a ravine by accident — although a few knees were bruised and clothes got soaking wet when one or the other racer failed to notice a pothole or toppled into a snowdrift. Halfway down the mountain, however, the slope led to the forest road, where the path was wider and the air between the snow-capped fir-trees was icy, but calm. After about 45 minutes, even the slowest and most overcautious team members had made it all the way down to the gondola base station. Now we were all desperate for a cozy room and a hot drink, though!

But first, we had to huddle together in the car and return to Munich, where we had booked a table at The Big Easy , the popular New Orleans-style bar and restaurant in town. Instead of proper starters, soup, hot chocolate, Bailey’s coffee or tea were suddenly all the rage, but soon everyone felt warm and comfy enough to look forward to the delicious food: Jamabalaya, gumbo, blackened chicken breast, juicy steaks, seafood, and other specialities of Southern cuisine were waiting for us. After the first bites from the mouth-watering delicacies, we deeply regretted that the helpings were so generous. There would be no room left in our stomachs to try any of the tempting options on the dessert menu!

However, there was still time for a round of cocktails and the Secret Santa Gift Exchange, a great opportunity to see how well we know our colleagues and how creative we are when it comes to choosing Christmas presents. All in all, it was a perfect occasion to get into the holiday mood together and to say good-bye to our current intern Bence (who also took the photos) since he’ll be going back to university in Hungary soon.