InterNations guestblogger Jessica, a recent US repatriate from Brussels, remembers how she started a cross-Atlantic long-distance relationship just six weeks before her imminent departure.

In a kingdom far, far away, there is a man who I have fallen in love with. I met my Dutchman (his name for blogging purposes) in the most inconvenient of circumstances. I met him six weeks short of my definite departure from Belgium on a typical Wednesday night at Place du Châtelain in Brussels. Given that the typical Wednesday night there involves many glasses of wine, the sequence of events may be fuzzy.

I stepped on his toes, I attempted to say “I’m sorry” in Dutch (as I overheard him speaking it), looked up (he’s 6’8”), and saw the cutest dimples I have ever seen. My liquid courage gave me no choice but to squeeze his cheeks and tell him how cute he was. He made me laugh with his commentary, and I received an unexpected kiss. That was the beginning of a Dutcharican (Dutch-Puerto Rican) romance. 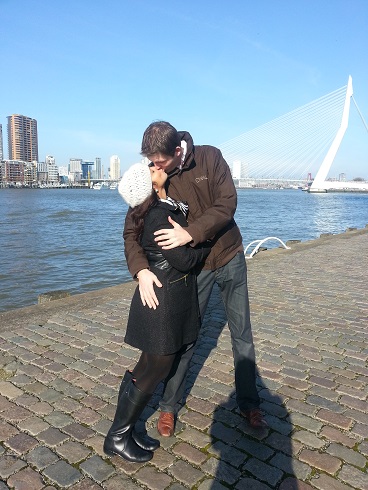 A few days after our meeting, we met for dinner. I recall telling him, “I did tell you I am leaving in six weeks, right?” He said yes, but it did not detract him from getting to know me better. As we walked from Place Stephanie to Place Flagey on a cool fall Brussels night, we exchanged stories about our travels and lives. We both share a love for traveling, food, and learning new things.

Our first date was intended to be dinner and drinks, but it evolved into a 26-hour date which included walking the streets of Brussels under a rare sunny sky on a car-free Sunday. During those hours, we made a choice to be present in the moments together rather than thinking of my departure. We barely spoke about saying farewell. Instead, we spent time in Brussels, The Hague (his city), and a weekend escape to Paris.

It was not until my last week in Europe that we discussed our future together. We decided a love like this does not come by often and wanted to see what the future holds. That was the beginning of our international cross-continental romance.

As I returned to the United States, not only did I have to get accustomed to a new life after seven years abroad, but also to having my love an ocean away. When we finally spoke about our arrangement, we decided we would try our best not to spend more than sixty days apart. We knew that it would be a little ambitious, but we are grateful we have the resources to make it happen. It is challenging because we are trying to build a relationship with a six-hour time difference and busy schedules.

With the distance also comes the merging of three different cultures. He learned about how large a Latino extended family can truly be during his Christmas visit. I’ve learned about Dutch family customs visiting his parents for tea in Rotterdam. Although different, we both have enjoyed the learning process and the openness of both of our cultures.

The reality is we can never plan who and when we fall in love. The biggest lesson I have learned so far from this experience is to be present. If I would have not taken the risk, I would have not experience such a great romance. Even with its challenges, I would never change the moment I stepped on the Dutchman’s toes.

In the near future, he will be an expat in the United States, getting accustomed to a new life and culture. I am grateful for his willingness to be open to start a new life on a new continent. In the long run it may be me as an expat in the Netherlands. For now, we have to optimize the Facetime, What’s App, and frequent flyer miles.

And what about you? Has expat life ever involved a long-distance relationships for you? How did you make it work?