When InterNations was founded in 2007, we chose the slogan “connecting global minds” because we wanted to bring people together – for socializing with other expats, for making new business contacts, for searching a partner for a language exchange or support with intercultural issues. Little did we know that, for our members Delali and Damon from Los Angeles, “connecting global minds” would actually mean “finding the love of one’s life”.

In fall 2008, Nancy, our LA Ambassador, approached Damon because she was just planning the very first InterNations event for her community. Damon had previously hosted a few parties at The Libertine, a hip and low-key lounge on Sunset Strip, and Nancy – who had attended and enjoyed them – needed help in finding a venue. Since the owners of The Libertine are good friends of Damon’s, he was happy to put Nancy in touch with them, and even though he’s American himself, he became very interested in the idea of InterNations and was glad to accept Nancy’s invitation.
When he arrived that night and was looking for the other InterNations guests who had gathered downstairs, in the lovely outdoor grotto, Damon found himself at the top of the stairs, looking down, and there she was, directly in front of him.

Originally from Ghana, she had just moved to LA after taking her master’s degree in California’s Bay Area and had come to this event with her Ugandan friend Dianne in order to meet some international people in town. 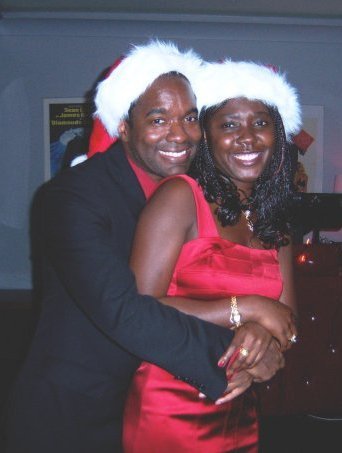 Damon, however, felt as if he had been led right to her. He describes his first impression of Delali as “the most beautiful Black girl with the brightest eyes and most welcoming smile he’d ever seen, who laughed easily and loved to play along with the jokes.” He barely remembers anyone else from that night – only that he had to ask Delali for her phone number, determined to see her again.

Although Delali jokingly called their first date the “worst she’d ever been on in her life”, they must have done something right after all. Not only are they still together after more two years, but they have also decided to make it official. The couple became engaged this year.

No firm dates are set yet because they just want to enjoy being fiancés for a while. But in their future, they are planning for a beautiful home and a big family.

We were really delighted and touched to hear this story, and we would like to wish Damon and Delali the very best for their life together – many years full of affection, joy, and, ultimately, the happy kids they want to have together. Congratulations!